We’ve had some great improvements since my last post. All three have been in one crib since Sunday, and last night they were moved to the step-down unit. That’s the last stop on the way home! At this point, even the nurses aren’t sure why they’re not at home, but I guess they just want to keep an eye on them a bit longer.

They’re taking all of their feedings by bottle. Linus and Oliver are eating 40 ccs per feeding (don’t ask how much that is, I think an ounce is 30 ccs) and little Miles is eating 35. Today we tried out breastfeeding, and it went pretty well, considering that gestationally, they’re really not old enough to know how. So we’ll just keep practicing until they get it.

We have a tentative take-home date of this weekend, but who knows? George is hoping for later rather than sooner, as our stairs still aren’t done yet – and they really HAVE to be done by the time the boys come home. So let’s hope it will all work out. George took today off to paint and varnish, and he is just exhausted now. Poor guy. But he did get to hold and feed Linus and Oliver last night. Still hasn’t changed a diaper, though. Soon. Sooooon!

Miles smiles! (or, has gas) 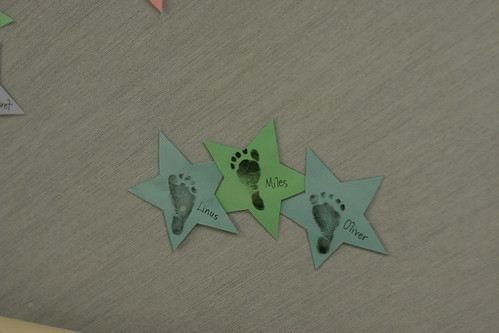 Oh yeah. George said he found some blog where people were debating our baby names! And someone else said they heard a radio show with them being discussed! As you can imagine, Linus got the worst of it. Hmmph. Ah well, such is the price of fame. 😛