So we had a great birthday weekend!

Started out with a zoo trip on Friday with Ren and Chloe and my sister and niece. Then we went to the NICU reunion at the hospital where we saw a bunch of our friends (and petted a pony. Random, eh? A pony? Yes.) and then, I drove around for about an hour so the boys would nap. Heh.

Last year at the zoo on their birthday:

By far, their favorite feature of the zoo:

The usually liked the primate statues:

An attempt at a picture with Mommy: 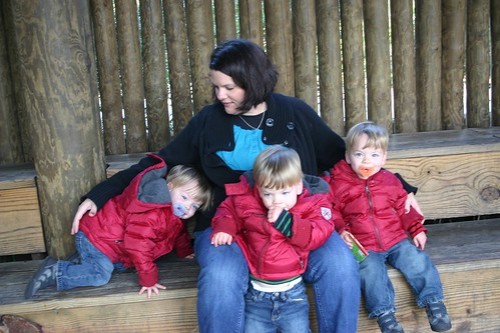 (Didn’t get any pictures at the NICU reunion, but picture three boys with fruit punch mustaches, and you get the idea.)

Unfortunately, the yucky weather prevented us from having our planned birthday dinner at IHOP, so we picked up some Popeye’s and went home. The boys loved their presents from Grandee and Larry!

Saturday was their party. It was a little stressful at first, but it went really well in the end. The boys behaved wonderfully, we saw so many of our friends, and I didn’t have to clean up afterwards!

The banner I slaved over last year:

The cupcakes Grandee slaved over this year:

Birthday boys in their awesome shirts:

Linus, after being sung to. And after sticking his finger in the flame. After I watched the video, it wasn’t clear which one of these things caused the tears.

Oliver during his song:

Miles during his song, entranced by the flame: 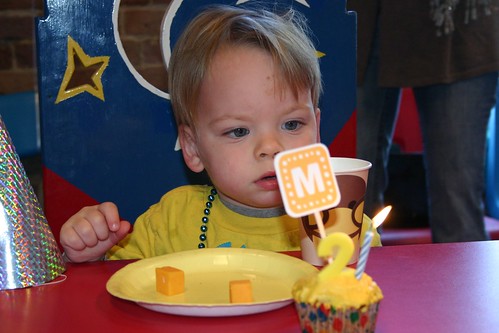 And a video, if you’re so inclined:

After the party, the boys went to Granny and Grandpa’s for a slumber party so George and I could relax and sleep in. Lucky for everyone, my sister and niece’s flight home was cancelled, so we got a few extra hours with them. And a nice early wake-up to drive them to the airport. Ohh, who needs to sleep in? Actually, it was fine – I went back to bed after dropping them off and slept til 11:00!

Now we have piles of presents waiting for the boys to come home to. I think they’re going to have fun ripping open all the packages.