Today was the big day. We took all three boys to the mall, where we met George’s parents for lunch. (In eight years of knowing George, this is the first time I’ve eaten at a restaurant with his mom. She has celiac disease, but we went to PF Chang’s, where they have a gluten-free menu.) They were very nice there. The manager came to talk to us, partially because he has two year old twins. And right before we left, the host ran to the back and brought us this tiny gift bag with three ceramic good luck cats in it. So strangely thoughtful for a chain restaurant!

Anyhoo…after lunch (during which I had a sinking feeling in my stomach) we headed down to the Build-A-Bear store. After much dithering, the boys chose their bears. (At first, they all made beelines for the pink bears, but they ended up picking more, well, boyish bears.)

Miles was first up getting his bear stuffed. My tummy was doing flip-flops and when it came time for Miles to put his binky in the bear, I burst into tears. What a wuss. I don’t really know why I did, really. Is it because my babies are growing up? I don’t know, I think it’s because I feel sad and guilty for taking away something that gives them so much comfort. 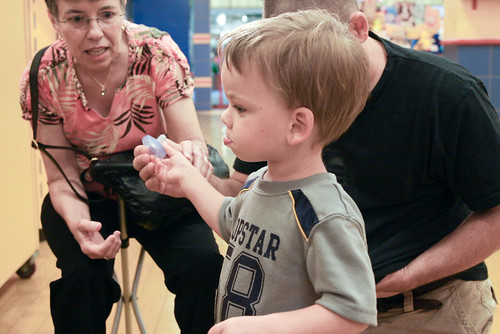 Linus went next, with his bunny. He, like Miles, willingly put his binky in the bunny. 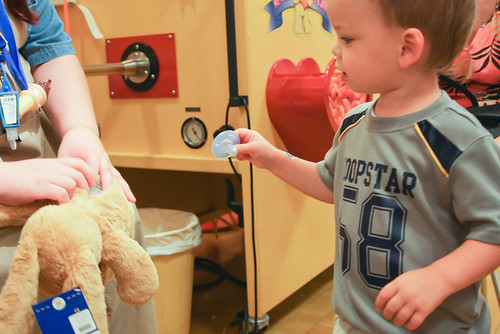 Oliver was last, and we let him put a binky in his bear too, just so he wouldn’t feel left out. After they were all sewn up, we found some cool Buzz Lightyear outfits for the animals, and we checked out. 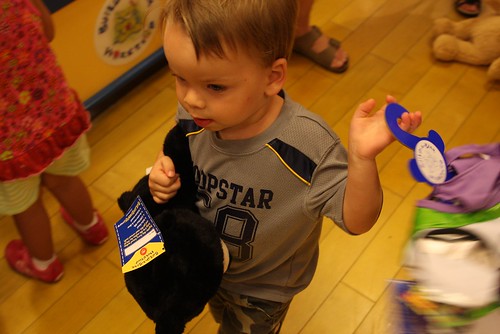 I wanted to run to Gymboree for a second, so I took Oliver with me, while everyone else was going to hit the Apple store. But this was a bad, bad idea, because apparently when I left, Miles started freaking out, and didn’t stop until we got to the car. He desperately wanted his binky back, and kept screaming and sobbing “GET IT OUT!”

Anyway, we went to G&G’s house and dressed the animals in their new outfits, and everything was okay for a while. Eventually we left, leaving Oliver with G&G and taking Miles and Linus with us. I didn’t want Oliver to have to suffer through the screaming that might occur all night long, so we left him to be spoiled and coddled mercilessly.

The rest of the evening went okay. Miles and Linus were very crabby, but we didn’t put them down for a nap, and I think that contributed a lot to their mood.

We set up the “jumpy” in the backyard, but it only provided a few minutes of this, before the crankypants took over:

Before going to bed, Miles undressed his bear with the intention of getting the binky out, but I just explained again that he couldn’t get it out. Ugh.

Finally, we put them to bed, and, fingers crossed, there hasn’t been much screaming. I think they were just so exhausted. The big test will be to see if they sleep all the way through the night without waking up in search of their binkies…

11 thoughts on “Binky-free progress so far…”

When you let the kids cut their own brownies. #noedges
Just posted this as the #photooftheday on my blog, but figured I should share it here too since it’s #sewing related. This is the Linea skirt by @wardrobebyme01 in the fabric I got in Lisbon at @ourotexteis. Thanks to @tjmaxx for the dressing room mirror. #ithaspockets #curvysewing #sewcialists #memadeeveryday
The boys are in sixth grade but played on the varsity team at school (7/8 graders). Tonight the team won the championships! So proud of them for playing with the bigger kids and holding their own. ❤️⚽️🏆
When in Rome...er...the Frankfurt airport...
Coworking in Sintra. What a view! #portugal #remotework
Keeping warm while waiting for the train to Sintra. #travelmattic
We did it! 🧩 #meetupfun #weareold
Got my fabric souvenir! #lisbon #fabrichoarder #fabric #sewing
Did I go to a Benfica ⚽️ game just to make my kids jealous? Maybe. But I also got them presents. So hopefully they’re not too mad. #lisbon #benfica #motheroftheyear