Ending the year like I began it, with Oliver. 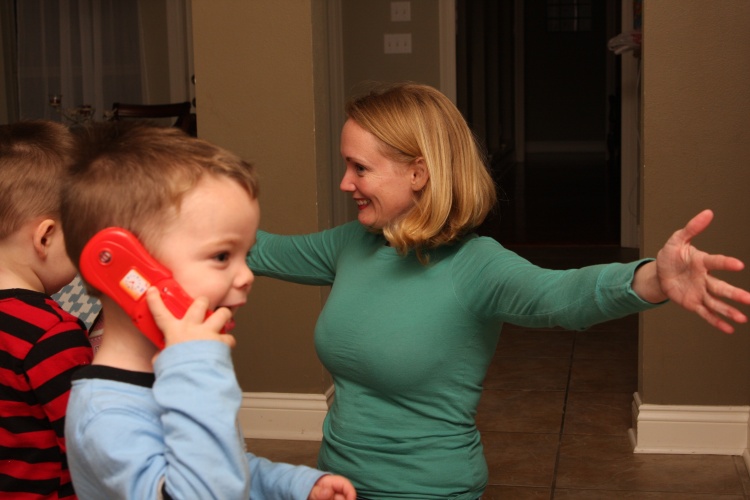 Someone give Aunt Renny a hug! Nope, they’re too busy talking on their new phones that she gave them.

Ah, that’s a better picture of the boys with my brother. After a few days around him, they’re not kicking and screaming. I mean, look, they’re holding his hands voluntarily! 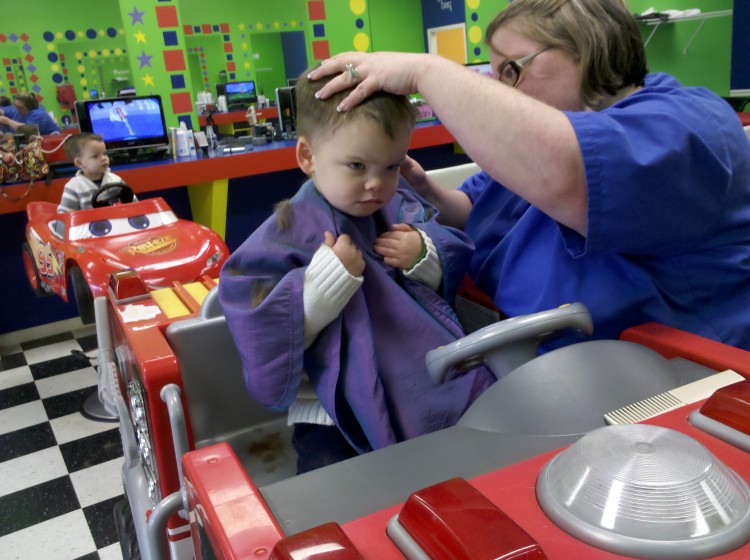 The boys got a much-needed haircut today, but they weren’t too thrilled with the process. The results were totally worth it, though.

I liked seeing the boys snuggling together like this. So sweet.

Christmas morning came bright and early…but thankfully not TOO early. I got up, put the egg casserole in the oven, made some coffee, and waited for the boys to wake up. We’d decided we wouldn’t open presents until after breakfast, but Santa did bring something to them in their playroom that they got to see right when they woke up…

I got a picture of each of them when they first caught a glimpse of their “new” (thanks Ren) train table. Miles:

After breakfast (mostly cereal, though Miles ate a little of the eggs…shocking!) we opened presents. The boys got tool sets and nerf footballs and lots of parts for their gender-neutral miniature playhouse. They also got tiny slinkies and some clothes and other toys. 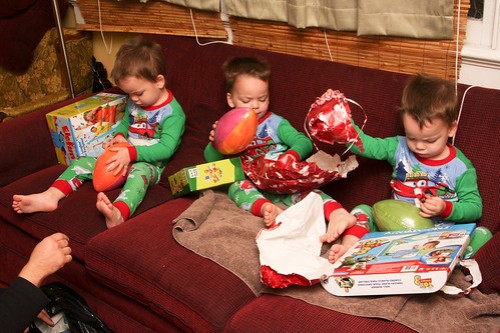 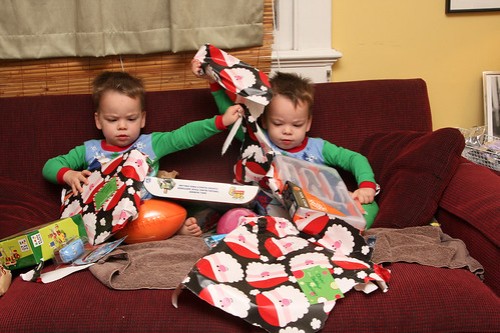 I got a new wedding band, yay! My old one (which I adore and is gorgeous, but sadly unresizable) doesn’t exactly fit right now, but after a little finger liposuction, it should be fine. Then I’ll have two pretty wedding bands!

We headed to my mom and Larry’s house after all the presents, and there, the boys got MORE presents! Cameras and train tracks for their new table. Flashlights and watches and all sorts of goodies! We ate an awesomely delicious meal and then went for a walk to feed the ducks.

To round out the night, the kids decorated a premade gingerbread house. That was cute.

And then the kids were in bed, thank goodness…I was so sleepy!

Today, I took the boys to see my lovely friend Kristie and her parents. I have been friends with Kristie since we were 12, so it was really weird/surreal to introduce my children to her parents. Love them! I’ll have to get pictures from Kristie of the boys’ shenanigans. After that, I dropped the boys off at Granny & Grandpa’s, where they got yet more presents. Tons of stuff! They were in heaven. 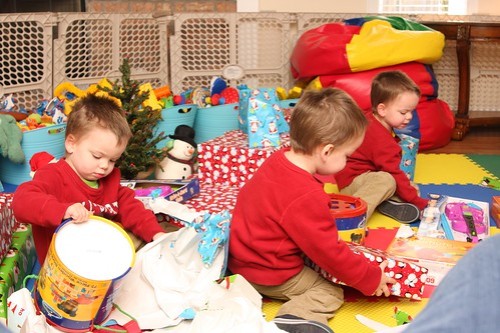 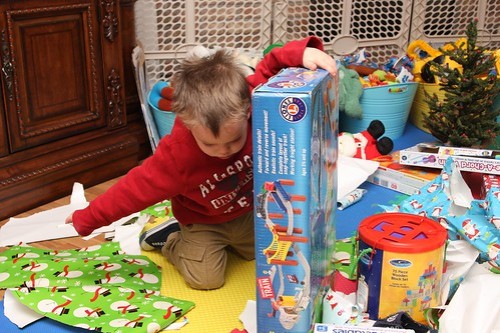 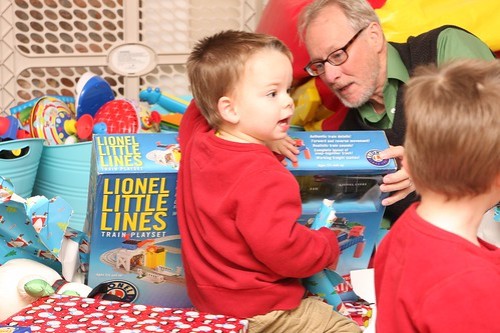 What a great Christmas we are having! I say “are having” because it’s not over ’til I go back to work on the 3rd. Or maybe til New Year’s Eve. Anyway, it’s still happening, in my opinion.

We spent Friday with friends and family. First we went to our friend’s house for gumbo. My mom used to make gumbo on Christmas eve (at least until she started making oyster & artichoke soup, yum) so it felt right to have it that day. Yum. The boys, being picky, only ate plain rice. But they ate a lot of it, so whatever.

Then they went and played with the other kids, which was awesome. A nice contrast to holidays past, where they spent them glued to my side.

We then went to George’s grandpa’s house so he could see the boys. They got their first Christmas presents from Granny & Grandpa, some laptops that made the ones I got them look lame. (So those will stay in the closet til next Christmas, I guess.)

After everyone ate some pizza (or threw it on the floor, thus earning himself a time out) we went outside to run around and jump in the leaves.

(or all over Grandpa)

and they said hi to Great-Grandpa Sam

Oliver got some flying practice in

And then we went home and put on jammies

and then went to sleep…zzzz….

My brother and niece with the boys. Linus (in red) wasn’t that into getting in the picture, as if you can’t tell.

Look at my beautiful Ellie! So sweet! 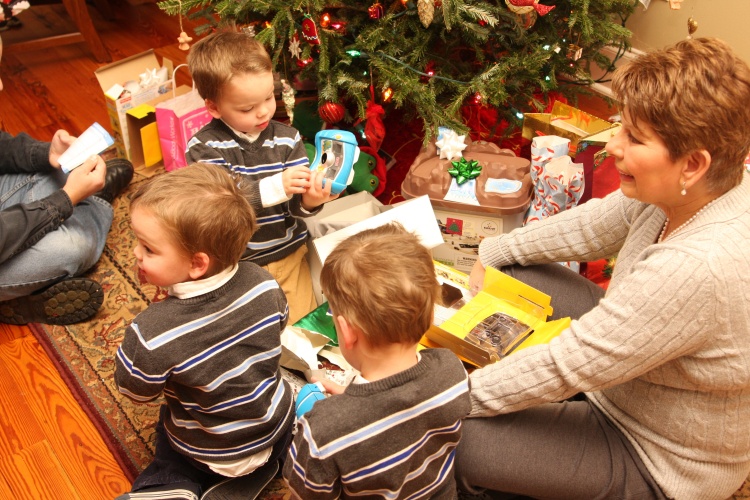 We spent Christmas Day at my mom’s house, where the boys got some great presents. They LOVE their cameras. I can’t wait to hook them up to the computer to see how many pictures of butts they got.

The boys, taking their yearly picture with their stockings. They’ve grown a bit since their first one, wouldn’t you say?

The boys had fun throwing their bears down the stairs at my boss’s house. I know it’s not the greatest picture, technically, but you gotta love the airborne bear right there.