Via Flickr:
I can’t help it, I love little boys in plaid.

And with this, I have made it a year and a half with my photo of the day project! I have only missed one day so far, and I was traveling.

Frankly, it’s become such a habit, I don’t know if I could stop if I tried!

Boys and their cars….

Just for fun, and because I’m feeling nostalgic, I wanted to go back and look at pictures from one…two…three…four (how far back can I go?) years ago.

There is pretty much nothing I love more than little boys in madras plaid shorts. And guess what I got for the boys today? Gaaah, so cute! (The boys had a slumber party at my boss’s house tonight, otherwise they’d be in this picture too.)

Man, I couldn’t even write this entry until today because I was still exhausted from the weekend. And that’s after they spent one night at Granny and Grandpa’s!

I had a lovely, relaxing evening on Friday. After I dropped the boys off, I vegged on the sofa and watched House. Slept in on Saturday and went to pick the boys up so we could all go see Cars 2! I swear, I had been waiting excitedly for this day for months, ever since I’d heard there was a new Cars movie coming out. The boys are obsessed with Cars, so I thought they’d be thrilled to see them on the “big TV” while eating popcorn. They’ve been watching the previews and clips on my iPad, they already knew the names of all the new Cars, and they love popcorn, so slam dunk, right?

After shelling out more money than I want to think about, Linus and Miles wanted to leave 1/3 of the way through the show. Meanwhile, Oliver was snoozing away on Granny’s lap.

Hmmph. So that was sad. We did manage to stay through the whole movie, but I was pretty disappointed that they weren’t more excited about it. Not that I expected them to follow the plot, but there was MATER! And LIGHTNING! Right there on the BIG TV!

So. After the movie, they went back to G&G’s to play while I went to my coworker’s house to get some more photos of their baby twins. I was pretty happy with how they turned out. I posted one a few days ago, but here are the other two: 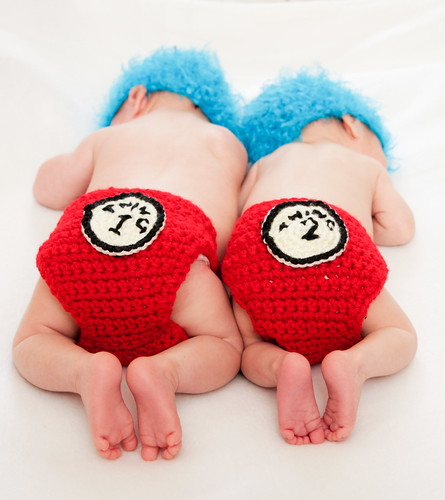 After I finished, we went home and put the boys in bed and I continued my vegging from the night before.

On Sunday, I filled up the water table and let the boys play for a while. Still in their jammies. 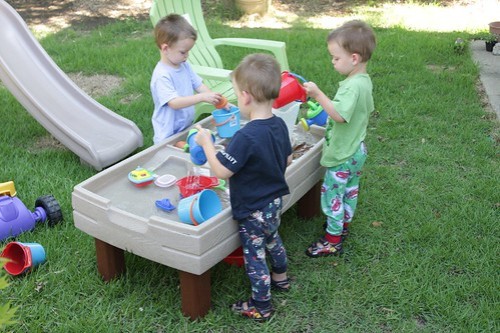 They were very proud of their bucket-filling abilities.

Then we went to a birthday party, where they played with Mr Potato Head and I played with vintage Tupperware toys.

And then the rest of the day was spent playing at home.

Today, the boys are staying at my boss’s house (and spending the night), so I’m going to go to the gym after work (yes, I rejoined yesterday after I had to quit because of my back) and then maybe George and I can grab dinner somewhere, and then I can watch MORE House. Woo!

That’s my green thumb at work right there! Well, I mean, it’s still alive anyway. This is one of the plants the boys got as a favor at my friend’s kid’s first birthday party. I love the colors.

Ooooh, how awesome is this? We went to a birthday party at my friend’s in-law’s house, and they still had this whole set of toy Tupperware from 30+ years ago. Don’t you remember having all this stuff full-sized? My mom still uses her cake holder, and we had that pitcher, but in avocado green, I think.

I was seriously enthralled by this.

I Heart Faces – A Touch of Whimsy, a photo by pyjammy on Flickr.

Via Flickr:
Whimsy is hard to come by with three rough and tumble little boys, but this is the best I could find…

Give my blog a vote by clicking the banner below!

Took some more pictures of sweet baby twins (the same ones from before) and this time, they were kind enough to sleep for me. Look how much they’ve grown in a month!

All four boys were enthralled by the construction going on across the street. I took this with my iPad, so pardon the terrible quality. But I don’t mind so much this time.

Click the banner below to vote for my blog!

Ah yes, just like the old days. Boys gathered ’round the light of the…iPad. Ah well, at least they’re sharing!

Well, someone woke up on the wrong side of the bed this morning…