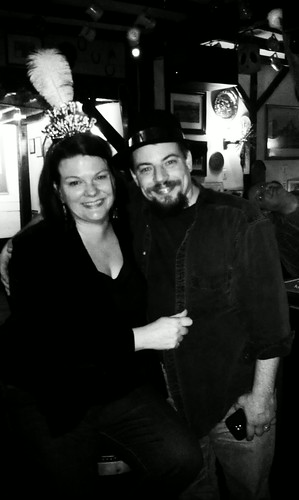 We took the boys to the Insectarium, and Miles was telling me about the bee that stung him on the ear that time at the park. I’m glad he’s not afraid of that plastic bee, but he was terrified of the butterflies.

My mom got the boys these Stomp Rockets for Christmas and they were a HUGE hit. Highly recommend. But we’ve already gotten two stuck on the roof. Oops! 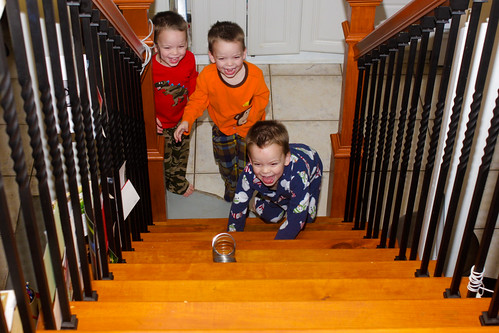 The boys got metal Slinkies for Christmas, and I tried to make it go down the stairs. Didn’t work too well, but clearly they didn’t care!

I was playing with the new remote shutter release I got for Christmas. Here’s me and my friend Anne, who came over with her little boy (who is the same age as the boys.)

This is kind of weird, yes? Reminds me of the Doublemint twins.

This was definitely the most fun Christmas we’ve ever had with the boys. And I learned my lesson from last year. Last year I kind of went crazy and probably bought every toy that said “ages 3 and up” for them (which is pretty much every toy on Earth) but this year, I was much more careful with my gift-giving approach. (In my head, I would compare this to war – carpet bombing with toys last year, but precision bombing this year.)

Linus was feeling so much better on Friday, which meant they were able to spend the night at Granny and Grandpa’s. Thank goodness, I really needed a break! Plus, I still had a ton to do before the holiday. I spent the evening making Pioneer Woman’s cinnamon rolls, which were not too hard to do, but maybe next time I’d cut back on the butter and sugar. They were a tad rich for me, and that’s saying a lot. The recipe made six and a half pans of rolls, so five of those got gifted to friends and family.

{Of course, after all that, the boys wouldn’t even eat them on Christmas morning. Argh.}

I got up bright and early Saturday morning to pick up the boys because it was snow day at City Park! They’ve been talking about it ever since last year, so I thought they’d be excited to play in the snow, but the reality was a bit too cold, wet, and slippery for them. Ah well, it was still fun while it lasted. 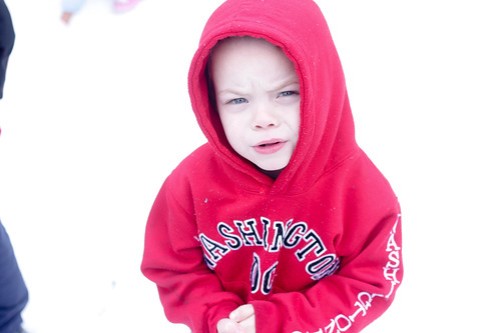 They had more fun jumping, playing on the railroad tracks and laughing at the naked statues. 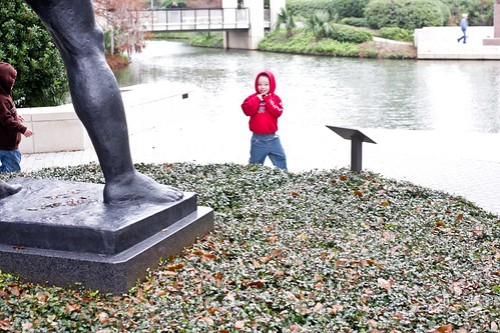 We spent the rest of the afternoon relaxing at home, then we went to our friends’ house for Christmas Eve dinner. Stephanie made the most incredible cioppino so even though the boys had a massive freak-out upon arriving at their house (they had fallen asleep on the way over) we had a great time. It didn’t hurt that I had an eggnog daiquiri when I got there and hot chocolate with bailey’s before we left.

The boys were up until ten thirty that night, which was insane. Their usual bedtime is closer to 7:30, so they fell right asleep and didn’t wake up the next morning until almost NINE! Now I know I need to keep them up super late if I want to sleep in on weekends. Ha.

So I was up at 7:30 on Christmas morning, waiting on my children with my coffee and a roaring fire.

I’m happy to say that the gifts they got were very well-received, except for the Hexbug Nano that scared the bejeezus out of Miles.

They got LeapPads, one Thomas train, and a bunch of tracks. Not too much, but they loved everything. They might be a little too into the Leappads, but at least they’re learning tools. Uh, yeah, that’s what I’ll tell myself.

And the fighting over the Thomas trains tells me they really love them.

Later, we went to George’s uncle’s house for Christmas dinner, where the boys got more loot (and so did George and I. I got a great set of Land’s End tote bags for the gym, overnight trips, etc.) 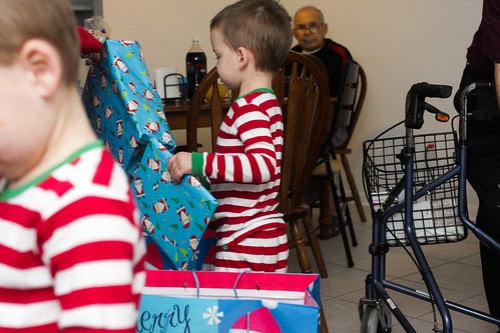 Oh yeah, I forgot to brag about what a great job George did for me. 😀 I got a new Kindle to replace the one I dropped a few weeks ago, a cool sciency cookbook, and the remote shutter release I wanted for my camera.

And that wasn’t all! Kristina got me a set of beautiful All-Clad measuring cups and spoons (I drool over hers whenever I’m at her house), some fun magnets, and a Parks & Recreation book. 🙂

Hope everyone else had a fantastic holiday as well! 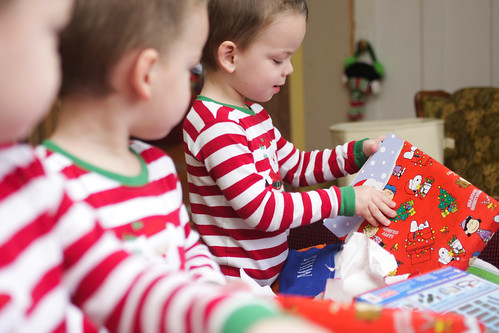 This might be my favorite moment of gift opening this morning (except the moment I opened my brand new Kindle, thanks Georgie!), when Miles saw the box I’d put their LeapPads in and exclaimed, "Oooh, Mommy, a SANTA box!" Then he tossed it aside, as if THAT was the gift. Hee!

Hard to believe this is their fifth Christmas! 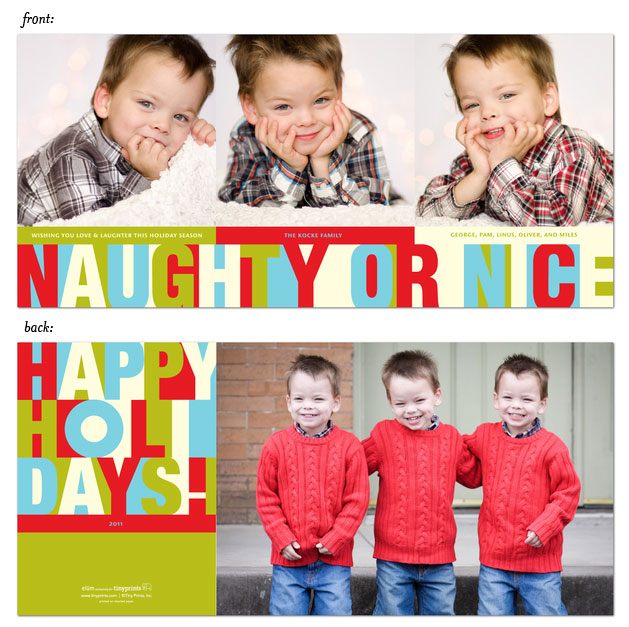 (that’s Linus, Miles, Oliver in the top photos, and Oliver, Miles, and Linus on the bottom.)

As you can see, Linus is feeling a bit better. The rash has calmed down a lot and his spirits were very much improved. So here’s to hoping we have a Merry and HEALTHY Christmas this year!