Yesterday we took the boys to the pediatrician for their long-delayed four year well baby (okay, fine, CHILD) visit. I had originally actually been efficient and scheduled it closer to their birthday, but then they got sick, and since their doctor is so awesome, we had to wait this long to get in with her.

The boys have been watching Sid the Science Kid a lot lately, and unbeknownst to me, there was an episode on a DVD I got them about vaccinations. So they were fond of telling me that I needed to get the “flu baccine” so I wouldn’t get the “flu birus”. So thoughtful. They also knew there were going to be needles involved, but since Sid was so brave, well then by golly, so were they.

As mentioned before, they got their blood pressure taken for the first time. Here’s Miles, calmly having it taken. 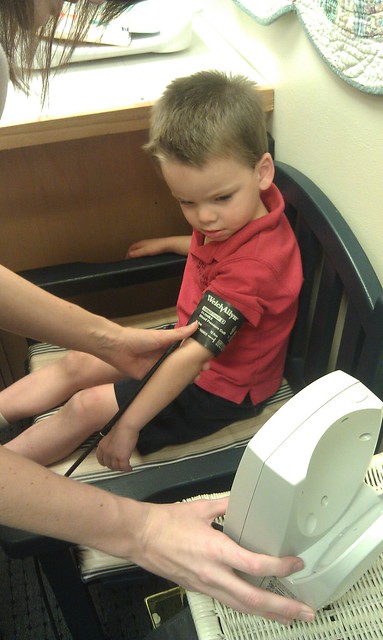 And then they were weighed and measured. 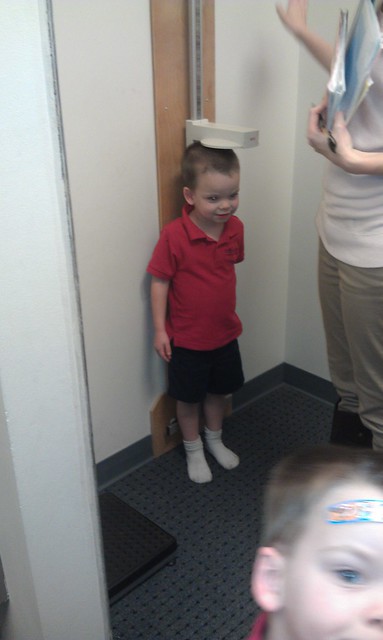 It’s so strange to me to see Miles weighing the most. And by over a pound! I still call him my peanut. Habit. I don’t think Linus’s height is accurate, he was slouching a little bit. I think they’re all pretty much the same height. He’s definitely not almost an inch shorter than Oliver. But they’re growing! Sniff, sniff.

On to the doctor’s office! One of the things I love about our pediatrician’s office is that there are no exam rooms, no tables, nothing clinical at all. Everything is done at the doctor’s desk. The kids sit on my lap as they’re examined, and it’s all very warm and cozy. However, that did not stop Linus from freaking the hell out when the needles came out. Even picking out his own Tweety Bird band-aids didn’t help. George and I had to hold him pretty tight while he got all four shots. Sniff, sniff.

As expected, the subsequent triplets were not exactly leaping on my lap for their immunizations. But since Linus was cheerily picking out four stickers as his reward, only seconds after being injected, they could see it really wasn’t a big deal. So within a few minutes, we were done.

On the way home, we stopped at a local dessert shop for a reward (for them? for me? who knows?) and they picked out cupcakes (and then insisted I get a brownie. I mean, you should have heard them tell me how I deserved it, and what a great Mommy I am, etc, etc. Those kids!) 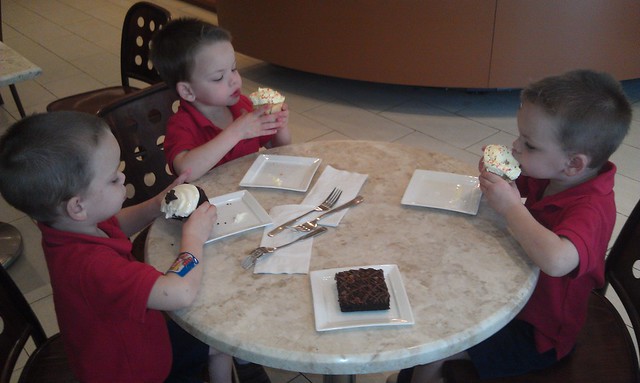 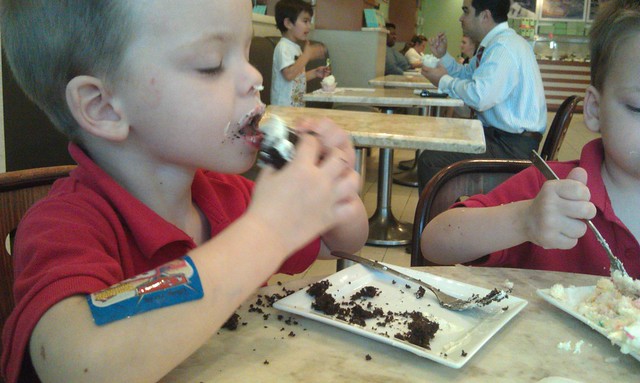 And by the time the cupcakes were devoured, the shots were long forgotten (until later, when they proudly stared at their band-aids.)

3 thoughts on “The 4 year well visit”

🌈
Before and after (and our wonderful landscaper Kevin after he finally finished.) I love it and the boys are thrilled to have a soccer pitch. ⚽️🥅 Blog post to come! #beforeandafter #yardrenovation #algierspoint
This tag perfectly embodies this project. Wonky hem, too big so I had to elasticize the waist, not-so-invisible zipper, and a lot of quality time with the seam ripper. But in the end I have a wearable skirt, as long as no one looks too closely. 🙃 Fabric is cotton sateen from @blackbirdfabrics, label by @kylieandthemachine, pattern...let’s just keep that between me and the skirt. #blackbirdfabrics #labelsbykatm #sewing #curvysewing #memadewardrobe
My poor lil rain barrel can’t handle this much rain all at once. #blessitsheart