Daddy demonstrates how to step on a stinging caterpillar.

The aide in the boys’ class is always telling me about how they love to look at themselves in the mirror while they’re washing their hands. Little egomaniacs!

– Last weekend, I started getting a bunch of comments in Japanese one one of the videos of the boys I have on YouTube. It was a bit weird, so I did a little poking around, and it turns out, the video was featured on the front page of Yahoo! in Japan. Weird!

(look at the bottom)

– Today marks two months on the Dukan Diet. Down 27 lbs! Kristina and I are going to New York City in a couple of weeks, and my goal for that is to come back 30 lbs down. Which means (because I fully intend to eat pizza and other non-Dukan-approved foods while there) I really should get to 33 or 34 down before we leave. We’ll see. At least we’ll be walking a lot while we’re there.

I made a silly little ticker over to the right that I update daily with my weight loss. I can’t believe I’m almost halfway to my goal! That would be when I hit 32.8 lbs. So maybe I should say my NYC goal is to get to the halfway point…

– I ordered these shoes yesterday. I’ve kind of been stalking them for a while, but then they showed up in my size, so I jumped on them. Fun for spring!

– Tomorrow is our annual triplet group Easter egg hunt. I need to stuff a bunch of eggs tonight. The boys are excited about it, I just hope the weather’s good!

Oh and hey, do you mind clicking on that banner down there? The Top Mommy Blogs one? Thankyouverymuch.

So last week, one of my endorsements was turkey bacon, and the reason I alluded to was the Dukan Diet. So yeah, that’s why I eat a lot of turkey bacon.

This week I want to endorse the basic Kindle. I love my Kindle. And you know what I love most about it? I love that it doesn’t do anything else. I have no desire for a Kindle Fire or even a Kindle Touch. I love that the screen is so readable, that I can read anywhere, and that if I need a new book, I can get one instantly. I love that I can get books from the local libraries for free.

Now, I do have an iPad, which is probably mostly why the Kindle Fire holds no interest to me. But I have to say, I love being able to read in full sun.

I also love that I can read the same book on my phone, my iPad, or my computer, if my Kindle happens not to be with me at the moment.

Hey, it’s our house! From the upstairs window of the almost-completed, previously-derelict building across the street. Very, very exciting. We’ve been waiting eight years for this!

This little spikey tube of evil is the reason I hate springtime in New Orleans, in spite of the beautiful weather.

Took the boys with me to Old Navy after school, and they fit right in with the mannequins…

For a while, after I ran some marathons but before I devoted my blogging to wedding-related stuff, I wrote a lot about my weight loss journey. My sister got married in October 2004, and I was determined to look good in the pictures. And then I got engaged a month later, and after that, my motivation revolved around my wedding. All told, I lost about 40 pounds, I think (not including the weight I lost while training for the marathons.) But then it all came back after the wedding, and then with my pregnancy, blah blah blah. Tried losing it many times, and could never get more than a few pounds off.

I was really starting to lose hope. Weight Watchers had worked for me in the past, but as I got older, it didn’t work as well, and frankly, I didn’t have the time to devote to journaling everything I ate, and going to meetings. I did Jenny Craig for a while last year, as I wrote about, and I actually liked it a lot more than I expected to. But I couldn’t afford to stay on that, so unfortunately, the weight came back.

I started to consider maybe I needed to try something new. And I remembered a few friends mentioning a diet they were having a lot of success with. It seemed pretty restrictive. No sugar. NO SUGAR! (Hardly any carbs at all, in fact, but NO SUGAR?!?!?) I am a sugar fiend. I figured any diet I ever did would have to allow me some sugar so I wouldn’t feel deprived.

But then I started reading about people having successes with fasting, maybe not for weight loss, but for breaking their sugar addiction. I’m telling you, quitting smoking was a piece of, uh, cake, compared to the idea of giving up my beloved sugar. But I kind of knew, that’s what I’d have to do. Not fast, necessarily, but give up sugar. I needed to make a drastic change. I needed restrictions.

Enter the Dukan Diet. That’s the diet my aforementioned friends had done and lost weight on. So I ordered the book

. Read over the website. Found some blogs. Did some research. And decided to just go for it. (And sadly realized I would have to stop making the pumpkin steel-cut oats I’d been enjoying for breakfast. Sniff, sniff.) I think what really convinced me was all the success stories I found online. Not the ones on the Dukan website, but the ones from real people. And the fact that the diet has a lifetime phase. You very gradually work back in more foods, and by the time you’re at the maintenance phase, it should be second nature.

The Dukan Diet is basically a low-fat, low-carb, high-protein diet. Yeah, like Atkins or South Beach, I guess. And let me tell you, I finally found something that really works for me. It really works! I started on January 30, and have lost 26 pounds. That’s in less than two months! I will freely admit that I have had some sugar. I allowed myself a slice of king cake at Mardi Gras, a piece of chocolate on Valentine’s Day, a small slice of birthday cake here and there. But overall, I’ve stuck to the plan well. (It helps that sugar now gives me a massive headache.)

There’s also no drinking on Dukan, so the glass of wine I used to enjoy after the boys go to bed has fallen by the wayside. George was, at first, a bit upset that I wouldn’t be hanging out with him at the pub on the nights the boys were at Granny & Grandpa’s. But it’s just a temporary sacrifice until I hit my goal weight (which should be this summer sometime.) I consider it completely worth it, but yeah, I do miss my wine.

So that’s kind of a big thing that’s been going on with me lately, but I haven’t really wanted to blog about it until I had success with it. 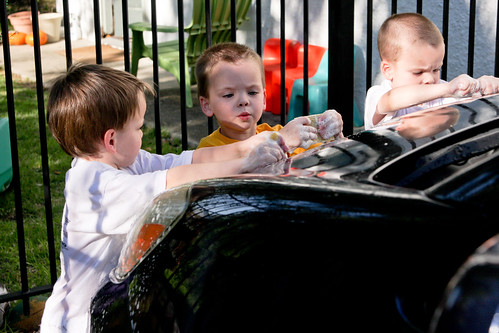 Yesterday, I had the quite brilliant idea of washing the car with the boys. It was a gorgeous weekend, so after we got home from a birthday party, we got the buckets and sponges and soap out and went to town. The boys had a great time, my car got (mostly) clean, and then afterwards, I washed their hair and hosed them off, so bathtime was done outside too!

I am so efficient.

I had a very busy day. I did a 5K in the morning, then went to my cousin’s wife’s baby shower, then took myself to a movie, then grocery shopping. So lots of opportunities for a photo (well, maybe not the grocery store) but since I didn’t have my camera with me today, you’re going to get this silly self-portrait I took after the shower. Because my hair was lookin’ good. 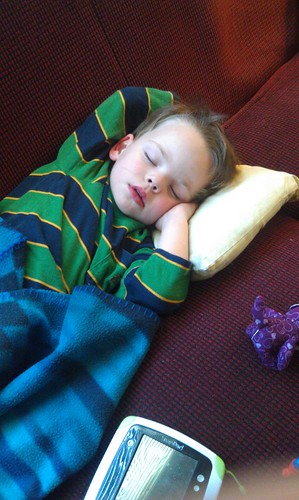 My sweet Milesy puked at school, so I had to go get him. We snuggled on the sofa for a while and he was better by the time he woke up. Love sweet sleeping boys!