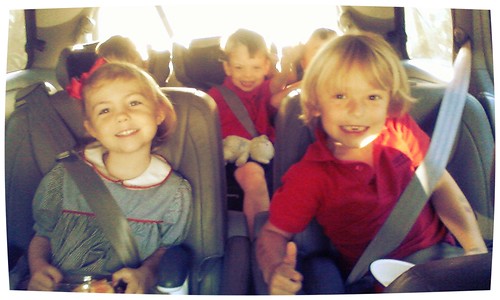 The carpoolers practice their smiles for picture day. Cheese!

I was practicing Oliver’s "school picture ‘do" after his bath. Hopefully their hair will cooperate. It tends to want to do its own thing.

– My kindle broke. Again. This time I did not drop it. Thankfully, it’s still under warranty. But this is the second time I’ve put one down, only to come back to it and the screen is all messed up. Annoying.

– And my phone won’t charge. I hate my phone. I’m seriously considering getting an iPhone in December when I can upgrade. George clearly thinks little of my plan, because he’s always sending me links about how lame the new iPhone is, how Android phones are better, etc. Sorry dear, I want an iPhone.

– I went to the eye doctor last week for a new contacts prescription and he found a “pigment spot” on my retina, very close to what is an important structure of the eye, apparently. I hate eyeballs. I will never get lasik because my eyeballs do not need to be messed with. Needless to say, I’m a tiny bit freaked out. Monday I go to the specialist to get it looked at further. I’ve already gotten a cold sore on my eyeball, do I really need more eyeball weirdness. Ick.

– I’m running a half marathon in a month. Hmm. At least I weigh about 25 lbs less than I did at my last half-marathon, even though I haven’t trained very much. I have been running on the treadmill in the mornings, and I can definitely run further than I could back then, so we’ll see. Oh, and did I mention I’m trying to raise money for Children’s Hospital? I obviously haven’t been trying hard enough, because I’ve only raised $50 of my $500 goal. Feel free to donate a few bucks. Or more than a few. Heh.

– The boys are doing pretty well separated at school. But they’re still not eating lunch. I have started a reward chart where they can earn a sticker every day by just trying their entree at lunch. So far, Miles is in the lead with five stickers of the ten necessary. His teacher confirmed he is only eating a tiny bite, but at least he’s trying it, right? Better than his brothers.

– On that note, this week I’ve been trying to make meals they might eat, that I can eat, and that we can all eat together. Monday night’s grilled chicken sandwiches (you’d think a grilled chicken sandwich wouldn’t be terribly adventurous, but trust me, they freak out at anything on bread besides Nutella) were a modest success. They ate the bread, and they ate the chicken. Mostly. Miles even ate half of his in sandwich form! And then last night, I made this chicken from Smitten Kitchen. Sooooo good…highly recommend.

The boys gobbled it up. They even ate some of the green beans I made as well! (Okay, to be honest, Miles ate like three. And that was it. But still!) Tonight I’m making these cauliflower pepperoni bites. Mostly because they’re low-carb and I can eat the bejeezus out of them.

– This is a fun site that George sent me. Try it and see how fast you can get. I got up to 111 words per minute! My 7th grade typing teacher would be so proud.

Okay, that’s all I’ve got for now. Apologies for the lack of pictures, but I’ve just been feeling uninspired lately. Blah. 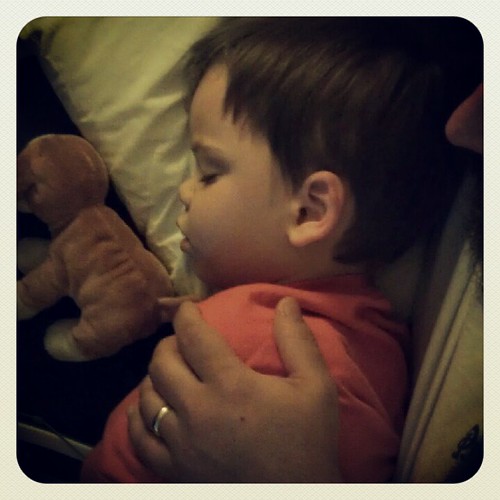 Sweet Linus bear. He wasn’t feeling so good this morning, and fell asleep on the sofa next to Daddy and his puppy. Don’t worry, after a day home with Daddy he was back to 100%.

The boys helped me organize the new shelves. Yeah, that looks about like my style of organization.

George used to live on this street, and we have told Oliver he was named after it. He noticed the extra "I" in there, though, so I don’t think he bought it.

I got a new set of shelves from IKEA and the boys helped put them together. Well, I use the word "helped" very loosely, but they were so proud of their accomplishment afterwards. Hey, if it gets them interested in organizing their toys, I’ll let them think they put the whole thing together.

Every Friday, the boys get to wear Saints shirts to school. I’m no fashionista, but the black shirts + navy shorts combo makes me a little twitchy. No matter. Thanks Kiki for the shirts! (She was moved by how pathetic I was last year by making their Saints shirts and so bought these for the boys.)

Took the kids to happy hour after school. Pinkberry happy hour, that is. Someone asked if they were quads. If they were, they’d be like this set.

Miles reads Oliver and Millie a story about Ironman. ("reads", I mean.)

Gimme a vote, just by clicking this: 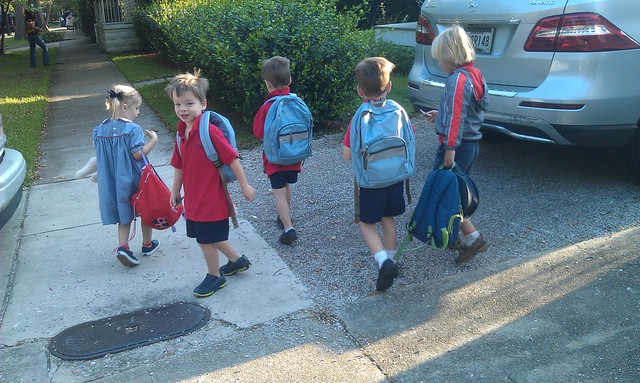 Today, for the first time since we started carpooling, I decided to walk the kids in. I had a meeting with Oliver’s teacher yesterday afternoon, and I decided I wanted to check in with the other two teachers to see how Miles and Linus were doing. (Both teachers said the boys were doing much better with crying, whew.) (Oliver’s teacher wanted to meet with me because Oliver isn’t eating the school lunch. At all.)(But that’s an issue for another day.)

I probably shouldn’t have walked them in, because there were some tears. But I was happy to see the classrooms and to get a little facetime with the teachers. I am surprised that I miss walking them in and spending a few minutes in the classroom every morning. Alas, it would make me super late for work.

On a funny note, this morning Millie asked, “Why don’t the boys know anything?”

Honey, get used to males being clueless.