I’ve been a blogging slacker lately, which is truly pathetic considering my new job…

Evan, Jennifer, and Ellie are in town for thanksgiving, which is fun. Ellie and the boys have had a blast playing, which is beyond sweet.

More pics from the weekend…

The Tilt-a-Whirl was a big hit, but I was mighty nauseated after the second go-round. 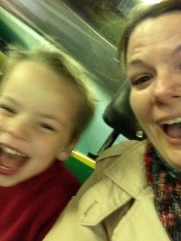 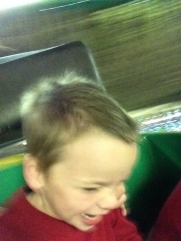 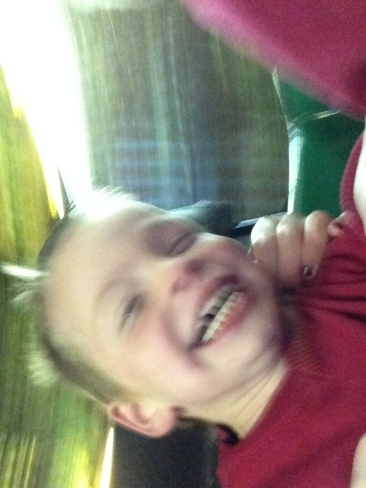 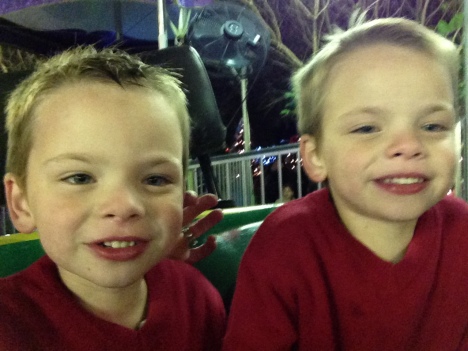 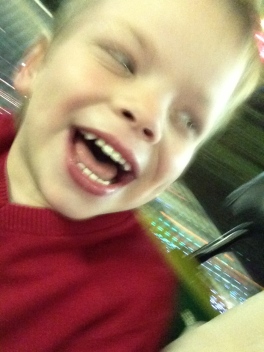 We even took them to see Santa on Sunday because there were no lines. Was I ashamed of myself? Yes, yes I was, a little. Ah well, on to Thanksgiving!

I started my new job yesterday! I can’t tell you how exciting it is to see my picture and bio on the Automattic “about us” page. It’s literally a dream come true. (I mean, literally in the sense that this is my dream job. I don’t know that I dreamed about it. But I know I had dreams during my trial of employment, so I guess I can use literally. Okay.)

A big welcome to new Automatticians @pyjammy, Omar & @davidwatkis! We’re happy to have you in our number 🙂 http://t.co/gJHjifpNvJ

The last 5k I did was the CCFC last year, and this year, I was determined to beat my time. If you recall, I came within seconds of beating my PR last year, and I was not going to let it slip from my grasp again. Not that I’d done much training, but in the week prior, I’d run two miles in under 20 minutes twice (yes, practically faster than the speed of sound I am) so I thought I had a chance.

I kept an eye on the weather all week, since I think last year, the heat was partly to blame for my time (I have to blame something other than myself, of course.) I was pleased to see it was supposed to be cool and cloudy. Perfect running weather!

Much like the half-marathon last month, the weather ended up being picnic-perfect, but a bit sunnier than I’d like for a race. But at least it was cooler than last year. Plus, they changed the route so it seemed to me a bit shadier than last year.

As the race started, I cued up the playlist I created, and then spent the first mile dodging walkers and people with strollers. Very frustrating. I wish the race organizers did more to remedy this. Alas.

I wish I knew what my splits were, but turns out the app I chose to use won’t let you look at them? Weird. We’ll see. Anyway, the upshot is…I set a new PR! By a lot!

After the race, we had bananas and Chee-Wees (best post-race food ever) and tiny Subway sandwiches. I beat these ladies! Woo! Ha ha! 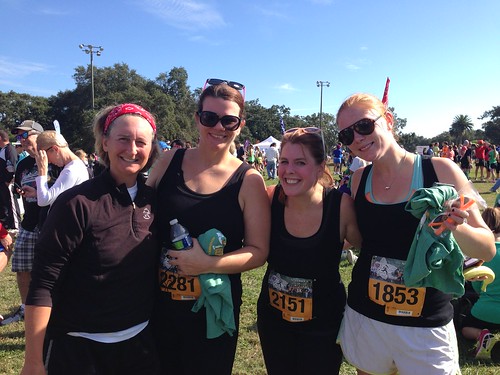 Now I’m even more determined to run more 5ks and fewer half marathons (as in, no more.) I may do one in December and see if I can…gasp…go even faster?!?

…this time, you can pin this one to your “Beauty” board.

I call it the “run to Ulta on your lunchbreak to return the pink and blue sparkly nail polish that your 5 year old son picked out, but that you wouldn’t even wear on your toes in the winter” manicure.

Here’s how you do it.

Step 1. Go to Ulta, buy a sparkly pink and blue nail polish because Miles likes it.
Step 2. Get home, realize it’s hideous and you’ll never, ever wear it.
Step 3. Wait a few weeks, then run into Ulta on your lunch break when you’re in the area for something else.
Step 4. Try on the navy polish you were lusting after, but then realize there are so many other colors, so start working your way from thumb to pinky.
Step 5. When you run out of fingers, start at thumb again.
Step 6. Pick a damn color already.
Step 7. Wander around store for a few minutes before going to the cash register, so you don’t ruin your new manicure!

And that’s really it! If you really want to be like me, leave the nail polish on for a few days, possibly weeks. And then remember that you’re 38 years old, dammit, not 7, and you should really have more mature looking fingernails.

PS I picked the one on my thumb. I’m not sure I made the right decision, so I will probably end up repeating steps 4-7 a few times.

Halloween is over, but the boys are still obsessed with costumes. Miles has told me approximately 3,654,339 times since Thursday what he’s going to be next year. (Red Samurai Power Ranger WITH the red disk but not the black disk and the helmet, not the mask, and don’t forget the boots and the gloves. And the sword. And the Samuraizer.) (And yeah, right, kid.)

We went to Target and I got them some $5 costumes in the post-Halloween sale, but that did not quench their costume search. Linus, in particular, became fixated on making a costume. A pumpkin costume, to be specific. Just to wear around, maybe to Mardi Gras, he said. So I said we’d work on that over the weekend. I found some $5 orange pillowcases at Walmart, so I got those (no chance anyone will ever be able to sleep with them on their pillow, they’re seriously orange safety cone colored.) But when I got home, plans had changed, and the pumpkin was discarded in favor of a new Power Ranger he invented. Love their imagination, but beware if you ever stay over at our house. Orange pillowcases.

We took a trip to Michael’s, where I got some plain t-shirts, fabric paint, and foam sheets. We got a good start on the costumes, but there is SO MUCH MORE. Swords, sword-holders, black square shoulder thingies, pants, robotic arms, etc. But I am pretty proud of our creations…

(couldn’t find Linus’s picture to take a pic)
translates into:

So, yeah, man, I totally expect this awesome DIY costume post will be posted all around Pinterest and re-pinned a jillion times. Right? Look, here’s a pinnable graphic. You are WELCOME!

My boys are almost 6!