Finished my first triathlon today! I was never super sure about doing a triathlon, mostly because of the swimming. But as I’ve probably posted a jillion times, I’ve been training over the summer and have been feeling pretty confident about my swimming. So then I’d get nervous about the bike ride, or maybe the run (or more accurately doing the run after swimming and biking.) I’m going to recap the race here, along with some tips and tricks so I’ll remember them for next time.

I did the race with my friends Heather and Maggie (well, we all did it today, not exactly together) and we drove up to Baton Rouge from New Orleans last night to stay at my mom’s house. On the way there, we stopped for dinner at a Mexican restaurant.

Tip #1: Don’t eat Mexican the night before a big race. I’m not saying it caused any major issues for me, but it just wasn’t the best choice.

We go to my mom’s, went to bed fairly early, and were up at 4:30 a.m. Got dressed, hit up Starbucks for a bagel and coffee, and got to the race area in good time. Picked up our numbers, got our stuff together, racked our bikes. On the advice of a friend, we put our stuff in crates so we could sit on them during the transitions.

After getting all set up, we found Teresa, who came to cheer us on and take pictures.

Tip #2: Bring your own paparazzi. Especially if you like seeing pictures of yourself in spandex.

It was time to go get in line for the race! Everyone got in groups according to when they anticipated finishing the swim. Since Heather is a former swimming champ, she was way at the front, and Maggie and I were closer to the back of the pack. I was pretty confident in where I seeded myself. It was a little slower than I could do, but not too bad.

After a million years, it was finally time for me and Maggie to swim. By this time, Heather was well on her way to being done with the bike portion of the race! Kind of crazy since her swim time was about two or three minutes faster than us, but she ended up finishing about 45 minutes before us. (At least.)

So it’s time for me to get in. I’m strangely calm. I knew I could do this. I get in the pool, and off I go. And…I feel awkward. I can’t get into a rhythm. My foot cramps up. I feel like my ankle chip thingy is too tight, causing this foot cramping.

Tip #3: Don’t put on your ankle chip thingy too tight.

Maggie started just after me, but passed me. I don’t know why, I just am not doing great. I am doggy paddling. I’m breast-stroking. I’m doing it all wrong. I feel bad – did I seed myself all wrong? There are other swimmers (doing about as well as me) clumping up around me. We pass each other a few times, and thankfully, before too long, I’m done with the swim.

I go to the transition area, and sit down to dry my feet off, put my shoes and socks and helmet and number on, and get my bike off the rack. The damn crate is in the way. But I get the bike down, walk to the bike start and off I go!

Almost immediately, I know something’s wrong. See, the day before, I’d picked up George’s bike (that’s what I was using) from a tune-up at the bike shop. And here’s where I made a big mistake. I didn’t even get on the bike until this very moment. And I discovered that the bike shop must’ve moved the seat all the way down.

Tip #4: Always get on the bike before the race. Duh.

I could barely straighten my legs, and I felt like Donkey Kong with my knees practically up to my ears. Or that’s how it felt.

I assumed I’d need a tool to raise the seat (my bike does) and I didn’t want to get off the bike to check, so I just kept going. I was pretty down at this point. I couldn’t go very fast on the bike, I’d just choked on the swim, and I was getting passed left and right. (Actually, just on the left. Heh.) But I just kept on. My quads were burning, and I was worried I’d pay for it during the run, but what could I do? I just kept on. Most of the ride was on River Road, which is pretty rural-feeling, with the levee on one side and cows or fields or trees on the other. At one point, I turned on some music (not with headphones, and just loud enough for me to hear. Not that it would have mattered. The only people who were riding near me were just passing me.)

I got passed a lot. I only passed one person during the entire 12 mile ride, and she passed me again at the end. But once I hit the halfway point, I was in decent spirits again. Everyone was so supportive of each other, and it was a beautiful day. I mean, for July in Louisiana.

I finished the bike and was happy that my legs weren’t too jelly-like. I had done a few “brick” workouts (triathlon-speak for a bike-then-run so you can get used to the feeling) so maybe that had helped. Or maybe doing slow did. Who knows, but I was pleasantly surprised. But I was getting nervous about the run. I just didn’t wanna. I don’t run outside in the summer. I just don’t. And I was about to have to do it.

Got to transition, dropped off my helmet, and headed out on the run. I felt like I was going incredibly slowly. I walked and ran, not really worrying about my time. Just wanted to finish. The run course was a little shady, which was nice, and it was also great to see Teresa (and Heather, who’d finished long before) cheering me on. When I got to the turnaround, I had the best-tasting cup of blue Gatorade of my life. 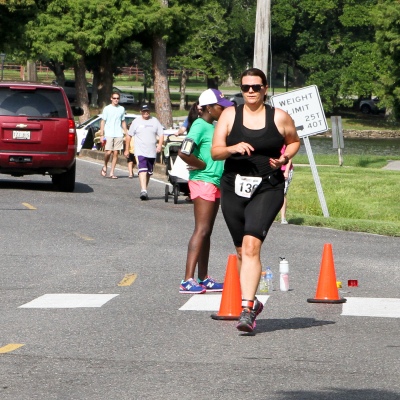 And really, before too long, I was at the finish! I high-fived some random kid, and got my medal and stuff. Woo! Love medals. 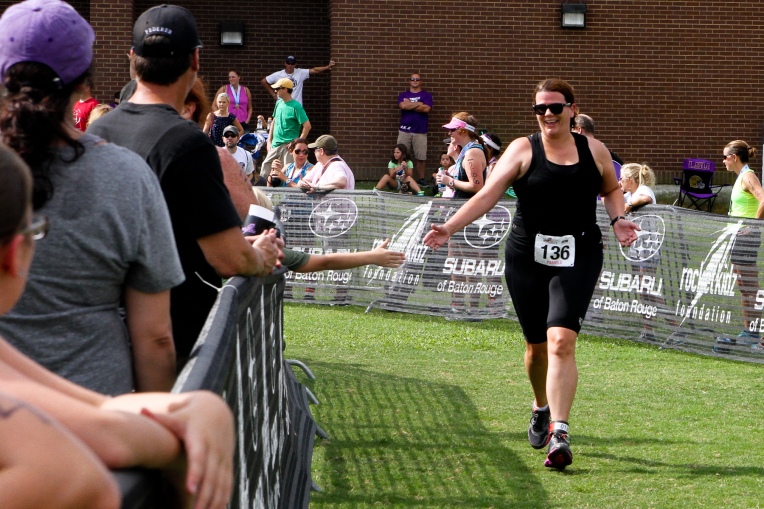 Found everyone and of course we posed for a pic. 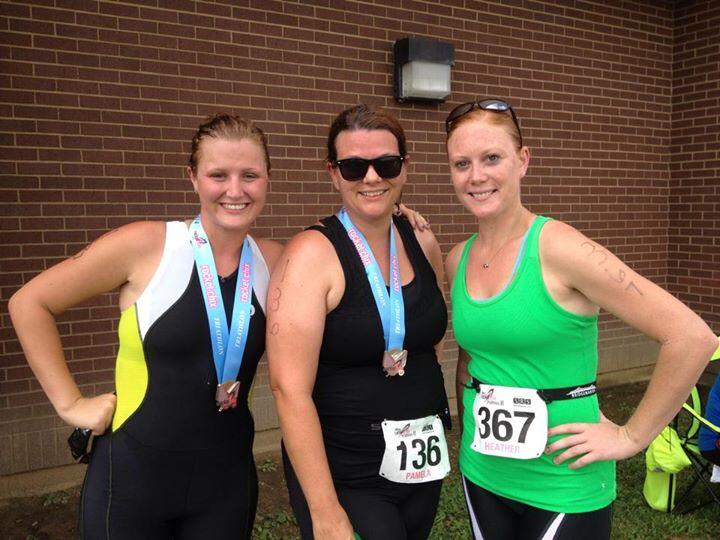 After the race, we went to get our bikes and stuff out of the transition area, and while struggling with a crate and my bike, I was given more good advice by some other women nearby. “Girl, get a bucket! It has a handle!”

Tip #5: Get a bucket instead of a crate. It has a handle.

We were able to get our official times, and I was so excited to see I placed ninth in my age group! (In my bike’s division.) (Okay, it was out of 14. But still.) And while I didn’t really have a goal time (honestly, I had no clue how long it’d take, but as the race went on, I was shooting for under 1:45) I was thrilled to see my chip time was 1:37!

Everyone said I’d be hooked after my first triathlon. I’m not entirely sure I’m hooked yet, but I definitely want to try again, knowing what I now know. I know I can get faster times in transition, and I know I can bike faster. In cooler weather, I’m sure I can run faster too. It’s too bad all of these sprint triathlons are different lengths, so it’s hard to compare apples to apples, but at least I can get my pace up.

This was a great beginner’s race. I didn’t feel terribly intimidated by the other athletes, and we talked to some great ladies in the line waiting for the swim. I think I’m going to have to try just one more, and then I’ll see if I’m hooked. There’s one in September (another all-female race with similar distances as this one) that I’ll probably do. I do love that I wasn’t just running the whole time. I’ve already said my half-marathon days are over, and I stand by that. So we’ll just have to see if triathlons take their place.

Heather before her bike

She looks so hardcore!

Maggie about to start the bike

Heather on her run

Maggie finishing up her bike 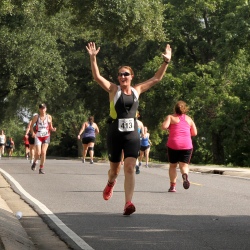 Maggie during her run

Maggie at the finish!