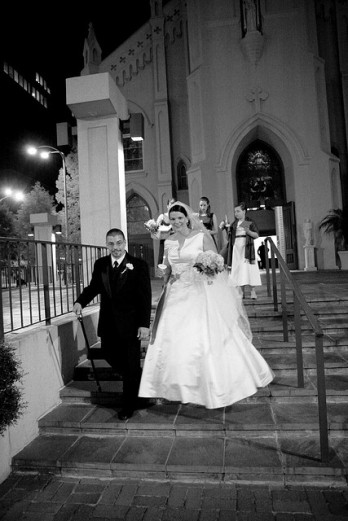 I’m not going to post about Katrina again here, but I’ll point you to the post I wrote about my experience on the New Orleans Moms Blog.

A Tale of Inconvenience: My Katrina Wedding

And here are the posts I wrote at the time (and a few after).

For the first 17 years of my life, my home was at 5822 Port Hudson Drive. A four bedroom, two and a half bath brick ranch built in 1975. We moved out when I was in away for my junior year at Louisiana School, and I guess I never felt like I truly got to say goodbye. Or maybe at 17, I didn’t know I should. In any case, I’ve dreamt about it, and I’ve driven by it countless times. So when my mom told me it was for sale, I knew I had to see it. This past Sunday, there was an open house, and I brought the boys.

I expected it to make me really emotional. I have so many memories of that house. And of course of my dad. As it turns out, the whole experience was surprisingly unemotional. It was interesting, but I never felt like I was going to burst into tears or anything.

END_OF_DOCUMENT_TOKEN_TO_BE_REPLACED

I’m pretty excited, and definitely nervous, but two months from today, I’m getting my eyeballs lasered! For a long time, I resisted the idea of LASIK, because I’m pretty squeamish about eyeballs. I mean, they’re disgusting. I wore gas permeable lenses for years because it gave me that many more microns between my fingertip and my eyeball during insertion. People told me, “it’s over fast” and “it’s not that bad” but not until my friend Bea told me she got to squeeze a teddy bear during her procedure did I really start to take the idea seriously.

So I’ve been for the initial consult, and then I got a phone call from the doctor himself approving me for it (I have a weird, gross eye condition we won’t go into here that could have meant I wasn’t a good candidate.) The other day I had my eyes dilated and deemed in perfect health (well, as perfect as they can be with my weird, gross eye condition) and I was put on the surgery schedule.

Of course I wish I could have it done sooner, but you can’t wear your contacts for three weeks before the surgery. I already signed up for a triathlon on September 27, and it would be impossible for me to complete the swim without contacts.

When I left my job at the Archdiocese, I had a bunch of money in my flexible spending account to use up, so I stocked up on contacts. Hmmm. Maybe not my best idea. So now I have to wear 9 months worth of monthly lenses in the next six weeks. I’m going to feel so RICH, just tossing them away after wearing them once or twice.

An amusing coincidence with the doctor I chose was that his office is in the same building as my plastic surgeon. Kind of feels poetic or something. Self-improvement via surgery and all that.

So that’s that. The surgery isn’t technically LASIK, but Intralasik, which means they use two lasers instead of a blade to oh god I can’t talk about this anymore. I don’t want to know how they do it, just give me a ton of Valium beforehand and a teddy bear.

I am sad to get rid of my Warby Parker glasses (also part of my FSA windfall from my last job) that I love, so if anyone can recommend a charity or somewhere to send them when this is all said and done, I’d appreciate that. (I wonder if any charities take contact lenses?)

I think I’m quitting my 365 project for the year. What’s it all about, anyway? Is it a way to improve my photography? Well, if that’s the case, most of my pictures are coming from my iPhone, so that’s not happening.

Is it to document the boys’ lives? Maybe. But not much happens when they’re in school. There are only so many pictures of “doing homework” and “playing Minecraft” and “brushing teeth” that I can subject you to.

Is it just to force me to blog more? Well, considering I haven’t posted in five days, I’m not doing so great there.

But here are some recent pictures anyway.

Waiting outside for the carpool 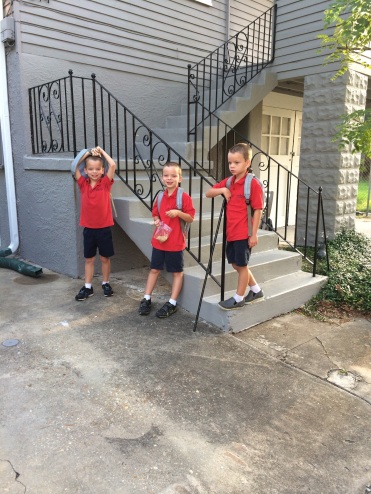 Getting a lice treatment. Yeah.

That’s what’s been going on here. Bike rides, swimming, school, and lice. Super fun times. But my hair has never been softer.

While I’m far too cheap to pay to have someone deal with the boys’ lice (that’s what clippers were invented for), I decided to splurge and have Natalie from The Critter Cure come out and treat me. And honestly, what a treat it is! You could pretend to have lice and have her come out and comb conditioner into your hair for a couple of hours. It’s quite heavenly and relaxing and if you sleep with the conditioner in because you don’t feel like washing your hair for the third time in 24 hours, your will have the silkiest strands imaginable.

Today was the first day of first grade. I have no idea how on earth that happened. Sigh. 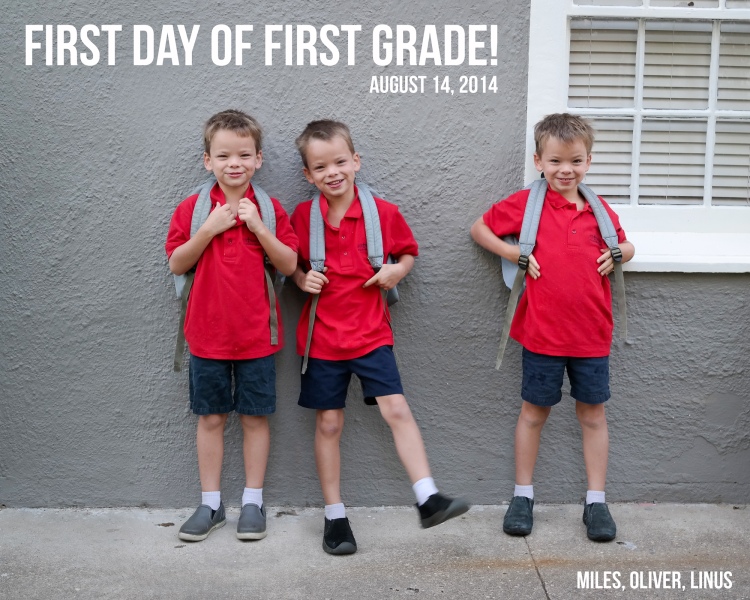 and to compare to their first day at their school, three years ago (because you know I love nothing better than comparison pictures):

No one had any problem walking in this year, which I think was a first. There was no fighting over who was going to go first, no tears, nothing. I’m so proud of them. Sniff.

So, the boys’ summer hobby was making YouTube videos. They started out pretty well but they’ve kind of devolved into just videos they take of each other playing. Uncle Evan needs to come give them a lesson in cinematography.

Nevertheless, they were not happy with the “symbol” on my YouTube channel (just a picture of them) so they asked me to make a new one. And this is what I made. Don’t get me wrong, my creative input was pretty much nil here. They were the art directors. Looks like a boy band album cover instead of a portrait of serious movie makers, but what can you do?

Two years ago, between camp ending and school starting, Kiki and I brought the boys to the beach for a few days. We stay at this amazing resort called the Caribe. There are a dozen pools and a lazy river. What else could you need? The condos are gorgeous and huge (the one we stayed in this time is way bigger than my house) and the beach isn’t too far away.

This year was even better than 2012’s trip because now the boys can swim! Well, I mean, they’re still working on it, but they improved so much over the course of our four days, it’s incredible. 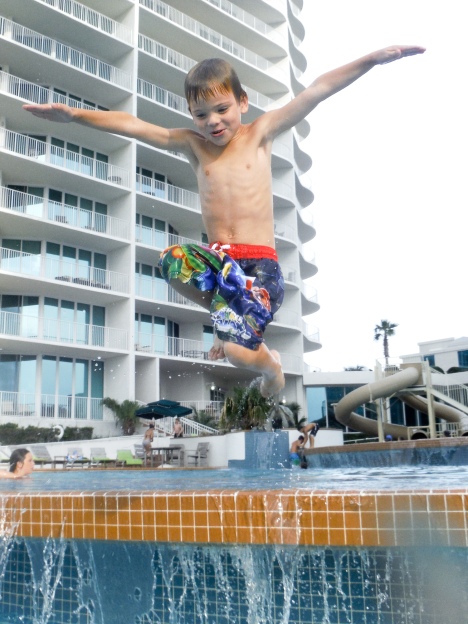 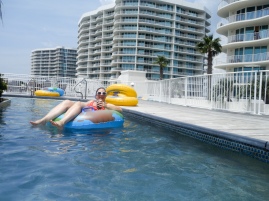 They weren’t even a little bit scared of the waterslides this time. But floaties made me feel better about the whole thing. 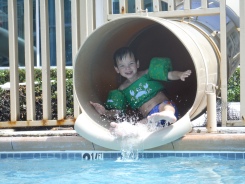 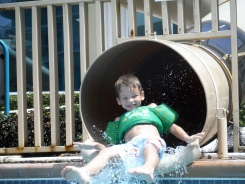 We went to an outdoor restaurant for burgers. Linus and Miles gobbled theirs up. Oliver wasn’t so sure. Sigh. 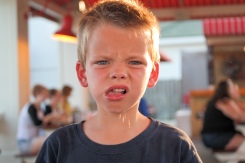 And then afterwards, they played in the sand for a bit, which involved some Pokemon battles. 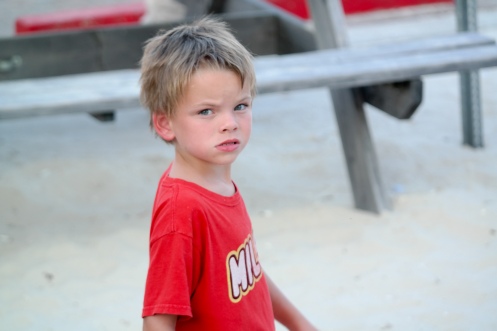 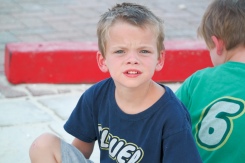 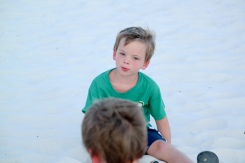 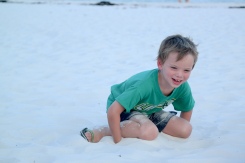 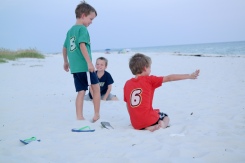 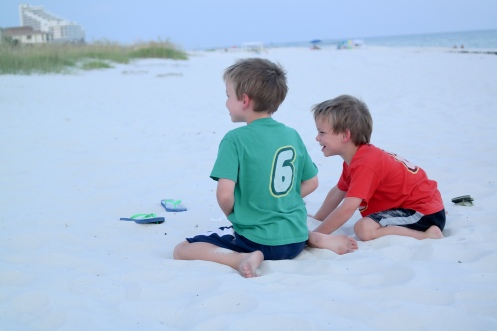 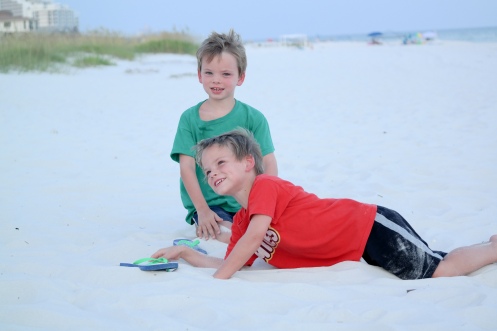 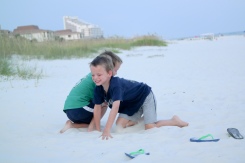 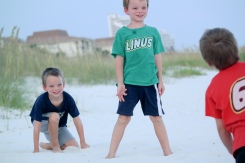 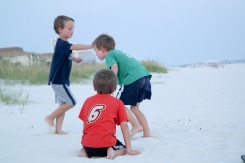 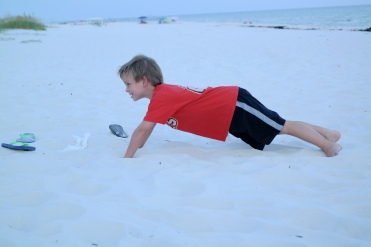 Went to the beach Thursday. I really don’t love the beach if there aren’t chairs with umbrellas and waiters bringing you frozen beverages. Hmm. I miss Playa del Carmen. 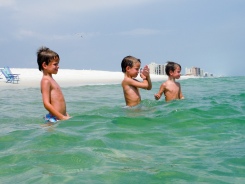 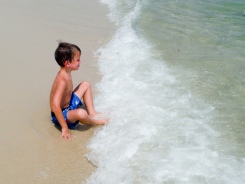 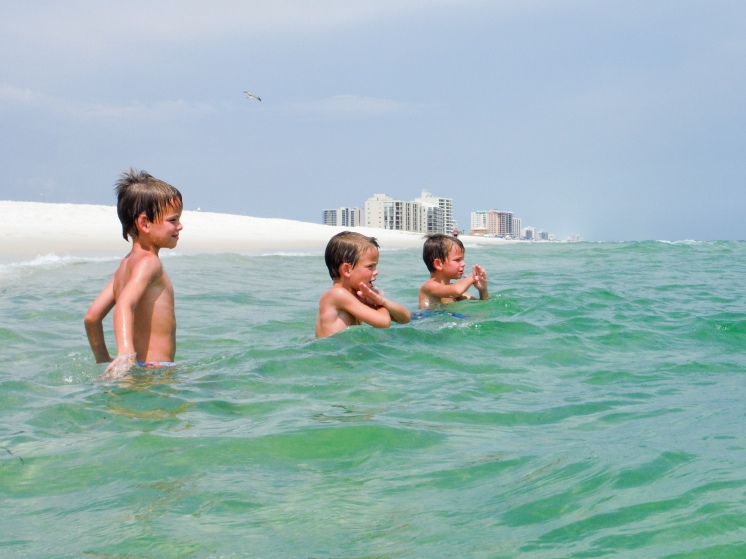 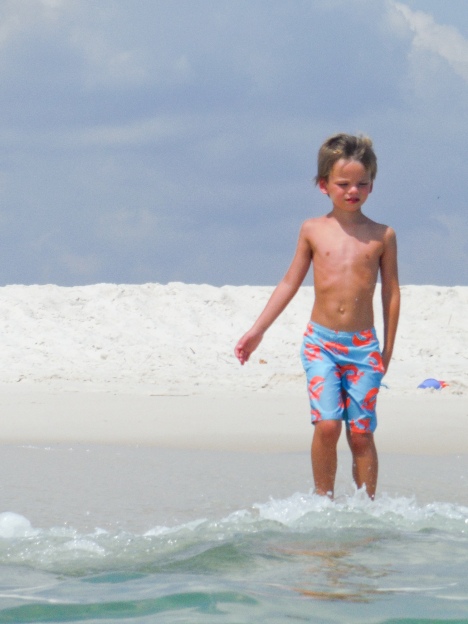 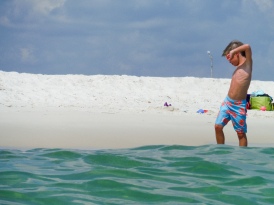 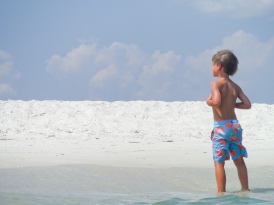 PS These pictures are totally counting as my 365 pics for August 6 and 7.

Me and my boys.

I originally posted yesterday’s monthly pic with the caption “70th monthly pic,” because apparently math is challenging. It is really the 80th. Crazy.

I didn’t take a single photo on Sunday. 365 project fail.

The boys say “handcups” and “lemontimes” instead of “handcuffs” and “clementines,” which, for the record, Oliver tried yesterday.

Oh, remembered one more. Instead of “versus” they’ll say something like “Miles is reversing Donkey Kong in Mario Kart.”

80 months old at the beach!