We lost a friend this weekend, and I just wanted to share to everyone who didn’t know him what a great person Gareth was. This isn’t going to be eloquent, I just need to get the words out.

We’ve known Gareth for, gosh, I guess at least 11 years? I’m not really sure. I do remember the first conversation I ever had with him. It was about our wedding planning, and he was telling me something about the royal wedding. You know, the Charles and Diana one. I don’t remember what he told me about it, though. Just that we chatted about it.

When George and I were planning our honeymoon to London, he urged us to take a few days and visit the Welsh town he grew up in, Hay-on-Wye. So we did.

Our wedding was just a couple of months after Katrina, and he’d stayed behind for the storm. Anytime our wedding came up in conversation later, he’d always say, “Pammy…that was the best wedding ever. Great party.” So many people needed the celebration, not least of all him.

I searched my blog for a mention of Gareth, and the only one I found was that he came to visit me in the hospital before I had the boys. Because that’s the kind of guy he was, even though I’m sure he’d have rather been anywhere else on earth.

In June, grossing me out with his bloody eye. 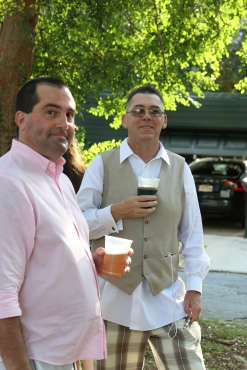 At our friend’s wedding in August 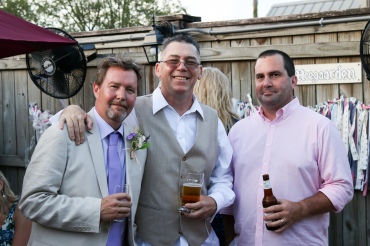 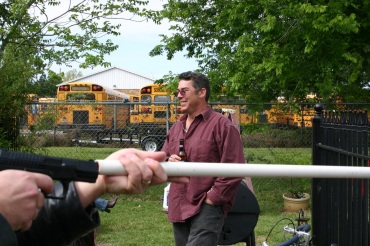 When the neighborhood was raising funds for a friends’ son’s surgery, Gareth showed us all up by donating a huge amount. He had been saving it up for something special, but gave it to the surgery fund instead. He was so generous in that way.

In July, there was a Proms-themed birthday party for friends at the pub. July in New Orleans. The man wore a suit, vest, and tie in the sweltering heat, because that’s what a gentleman wears to the Proms, and to honor his dear friends.

Gareth had two dogs, Owen and Lizzie. They were always with him. They are the sweetest dogs, and the first dogs the boys were not scared of. (Don’t worry, Owen and Lizzie are being well taken care of now.)

Anyway. There are a million stories to be told. A million memories. A million laughs.

Cheers, you crazy Welshman. We’ll miss you so much.

7 thoughts on “Rest in peace, Gareth”

I made my first quilt! It’s huge and of course @schittscreek themed because I am me. Fabric from @joann_stores and @spoonflower, advice and moral support provided by @goteamwood. 🧵🪡📍Lots more pics and details on blog. #ilovesewing #quilting #schittscreek #ewdavid #moirarose #lookatthosewigs #roseapothecary #joannfabrics #spoonflower #stitchcollectivelabels #katmlabels
Taking a break from putting 10000000 lights on the tree to watch Home Alone with Oliver and Ziggy. 🎄❤️
The boys are enjoying their early birthday gift from Grandee and Larry. Explain how we ended up with sporty kids?!? 🏀
Sometimes I think he’s tormenting me with his cuteness. #ziggymcziggerson #dog #cute #ugh