When Uncle Evan and Ellie are in town, I take a picture of them on a certain bench in the LSU quad. This is number 5. 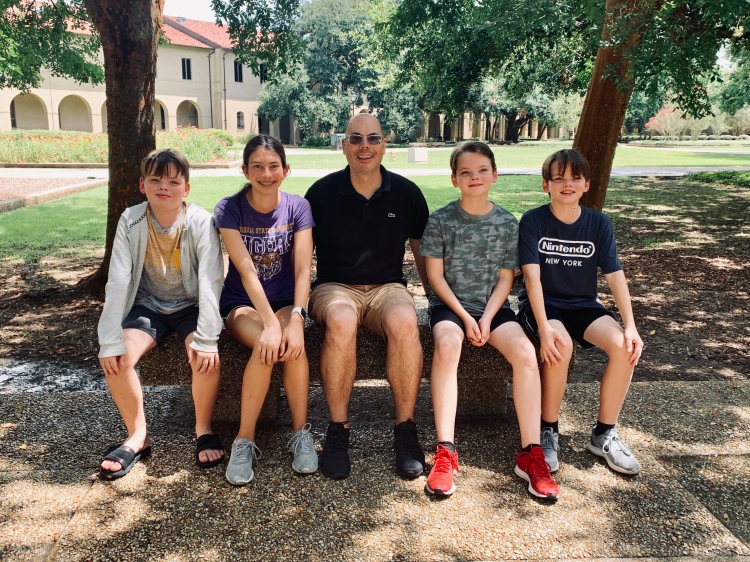 My brother and niece came to visit in August 2012, when Ellie was 7 years old (plus a few months.) We took a walk around the LSU campus (where my brother and I both went to school) and I took a picture of my brother with his daughter and nephews.

Today, Ellie is almost 10, and the boys are 7 (plus a few months) and we went back to LSU, visited Mike the Tiger again, and found the same bench in the quad for a reprise of that old photo.

Looking at the boys’ legs dangling above the ground in the first picture compared to today’s kind of kills me.

Uncle Evan came to town this weekend (well, to Baton Rouge), so I took the boys to see him and spend the night at Grandees. It was mostly fun.

Friday night we went out to eat, and Saturday we went to the mall. I bought some lipstick that has since disappeared. I suspect it’s in my car somewhere, which means it will have melted into a puddle by now, which means I may has well flushed $12 down the toilet. Or burned it. Or shredded it. Etc, etc. Sigh. I hope I find it.

Saturday night, some people came over for dinner. Later, Evan made me drive across town so he could film some nighttime footage for the movie he’s currently working on. I’d better get mentioned in the credits.

Here is Uncle Evan and his three nephews (out of order…here is Linus, Miles, Oliver.) 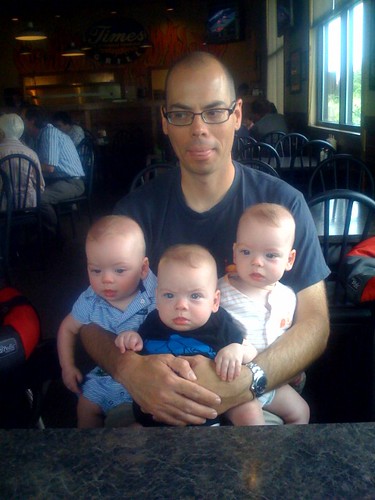 When the boys were born, I thought they looked just like Evan. Maybe it was the hair…

Totally off the subject, but this is how I found Linus during a nap yesterday:

I can’t tell you how much the 22 year old Pam from 1997 who was obsessed with Britpop loved this ride. Enough for me to post about it, along with a pic of me and @kikikmo at V97 in July 1997. 🇬🇧🎵❤️🚲 @onepeloton @bradley_rose23
Ok, finally getting on the no-knead train. This recipe from @kingarthurbaking is so easy and can be made same day. And there’s enough dough for more tomorrow! 👑🥖 (look for “No-Knead Crusty White Bread” on their site.)
Rainbow seams! My second #blackwoodcardigan from @helens__closet. Fabric is baby French terry and I decided to use the loop side as the “right” side. #sewing #curvysewing #memadewardrobe
Today, last week, this spring. Bye tree. 😢 #hurricaneida