For a change of pace, I signed the boys up for a different camp this week. It was at a little studio in our neighborhood called the Mini Art Center. We really enjoyed walking the six blocks to camp every morning (Ziggy accompanied us and he probably enjoyed the walk most of all) but thanks to typical NOLA summer, weather, walking home didn’t work out so well.

(We got completely drenched on Tuesday.)

The theme of this week’s camp was cut out animation, and all week the whole class of ten kids worked on a film together. This afternoon we got to go watch the (almost) finished product. Next week we’ll get a finished video that I can post, but in the meantime, here are a few pics from today: 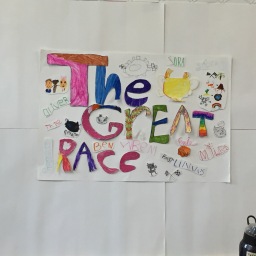 Their teacher introducing the film 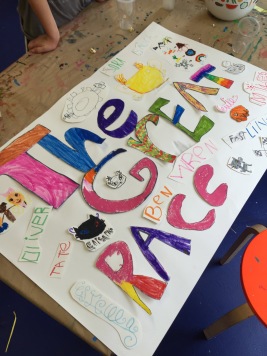 Written and directed by Linus…

who also stars, alongside his brothers Oliver and Miles…

I actually had more fun than I expected “helping out,” (i.e., doing all camerawork and post-production and dealing with temperamental artists) and I was impressed with how much work the boys put into it.

A few weeks ago, I responded to a casting call for local identical twins about the boys’ age. Didn’t hear anything, forgot about it, no big deal.

But then yesterday, I got an email in the morning asking if the boys would be available for filming today. I called back the casting agent and was told the casting person from the other show gave her the boys’ pictures for this movie. Since I said they could be available, the boys were now going to be considered.

Since the filming was taking place the next day, they’d have to choose someone quickly, so I spent all day in a state of nervous excitement. I couldn’t even eat, could barely concentrate.

It’s just as well they never called. I could not do this all the time. Although I suppose it would be a good weight loss tool.

I don’t know if it’s okay to give too many details of what the movie is, but let’s just say:

The part they were up for involved holding on to Mama’s leg and crying, and I don’t know if Elizabeth Jennings would be wearing the skirts my children would take turns crying on, or that the dude in the Lincoln commercials would be their dad, but it’s cool to imagine it was.

But the state of nervousness all day was too much to take on a regular basis. The boys didn’t even know, so I don’t have to worry about their delicate egos being bruised, at least.

Oh, who am I kidding? This is the second time in their life we’ve been through this. I can handle it once every three years, right?

15/14/13/12/11/10/9/8/7/6
There was seam ripping and deconstruction and reconstruction and things being taken in and things being taken out and some cursing and a lot of laughing and a shitload of learning. Thanks @lladybird for another fantastic workshop at @papermaplestudio! #ilovesewing #workingonlovingseamripping
Put the Christmas village I made on the mantle. I think I incorporated my #schittscreek ornaments quite nicely, yes? #moirarose #watchesusall #roseapothecary #rosebudmotel
They’ve barely changed at all. 😭
Join 2,593 other followers