Two days ago, I rode in a Mardi Gras parade! I feel like the whole process is shrouded in mystery, so I am here to BLOW THE WHOLE THING WIDE OPEN!

Just kidding. Am writing it here because that’s what I do.

So I think two years ago I filled out a form for the Krewe of Nyx in the hopes that one day I’d get to join. My friend Megan had been riding in it for a while, as well as my friend Mary. Last year not long after Mardi Gras I got an email saying I was in, if I wanted. So I paid my dues (I mean literally, I sent them a pile of money) and then not much else happened for a while.

In the fall I officially found out I was on a float with Megan and Mary, yay! I figured I should start working on my purses. Nyx’s signature throw is a glittery purse (think Muses and their glittery shoes and Zulu and their famous coconuts) and we were allowed to decorate and throw 20 of them. I couldn’t even think of starting until after we got back from our trip to the UK, so not long after we got back I went to a Mardi Gras supply store and bought 20 cheap glittery purses and a shitload of glitter glue, feathers,  plastic jewels, and other random bits and pieces.

Meanwhile, Megan and I decided to share a package of beads and throws, so she took care of ordering that.

In early February was the first big event with Nyx, the ball! I’ve already written all about that, but let’s look at the glamorous picture of Pam again, shall we?

Next was costume pickup. We had to go to a warehouse to pick up the satin tunic, wig, mask, and headpiece we were to wear on the floats. These all had to remain TOP SECRET until parade day.

Finally, it was nearly go time! The day before the parade, I went early in the morning to bring a cooler and some other throws I’d bought and put them on the float. It was exciting to see it up close and to go on a float for the very first time.

Later that day, I needed to go back, so I brought the boys on the way home from school. They got to climb up to the top deck where I’d be riding and look around. Cool! 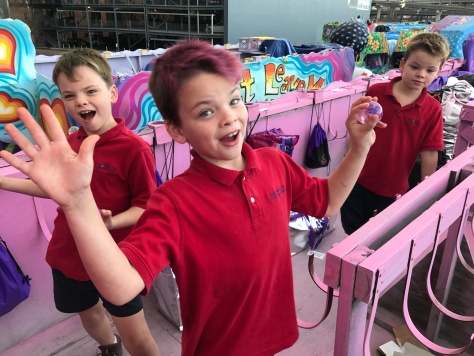 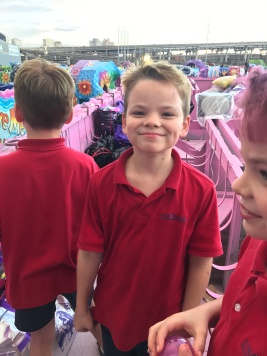 In front of the float (theme was Belly Dancing)

The next morning, after I brought the boys to school, it was finally time to get ready! I put on my tunic over some Mardi Gras leggings I got from my friend Mary, my glittery sneakers I’d made for the parade I marched in last weekend (more on that later) and the wig. I mean, typical outfit for a Wednesday, right?

Then I glittered up my eyelids and waited for Megan to come over so we could ferry over to the pre-party.

We stopped on the way for some food and daiquiris, and then it was time to go into the pre-party! Booze flowed and I found some friends who were riding on other floats. Not easy when everyone is wearing wigs and elaborate headpieces!

Wig! I kind of want a perm now. JUST KIDDING. But I really loved the wig. 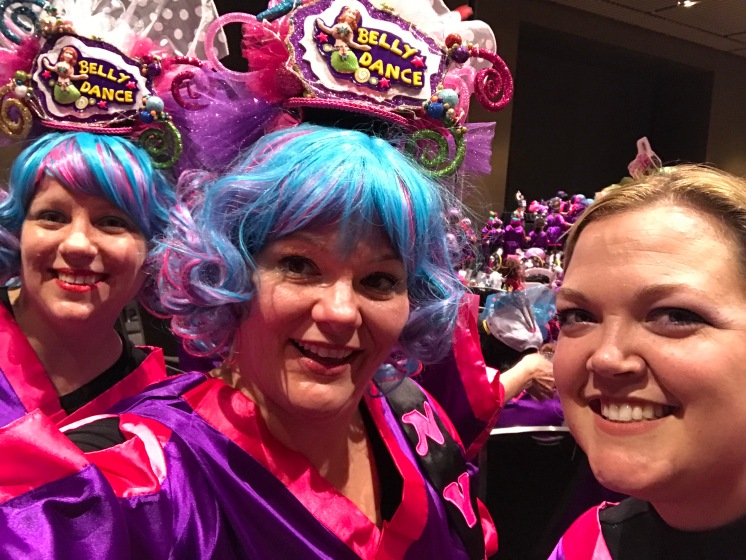 At the pre-party with Megan (left) and Marie, wigless at the time.

After getting the headpiece (which was quite heavy) ziptied to my head (not joking) and finding some tylenol because it was squeezing my brain and giving me a headache, it was time for our float to get on our floats!

It was pretty early, maybe 3:30 or so when we got on our float? Keep in mind the parade wasn’t supposed to start until 6:45 and we were the 41st of 42 floats. So we were going to be on that float for a long, long time.

It’s hard to describe how full of beads and other throws and women and coolers the float was. We were on the top deck (no shade up there, but at least the sun was on the way down) so we unloaded our throws while sipping on the daiquris we brought on board. I talked to some of the other riders, including a twin mom that I had a lot in common with. That was fun, meeting some new people! 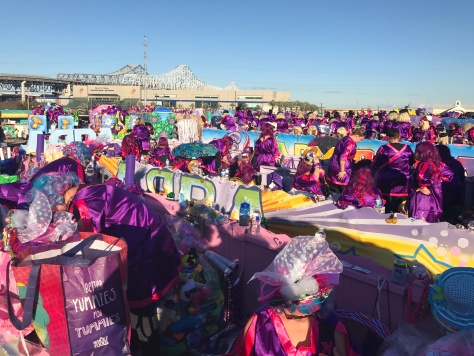 A sea of women on floats.

Megan with our stuff. 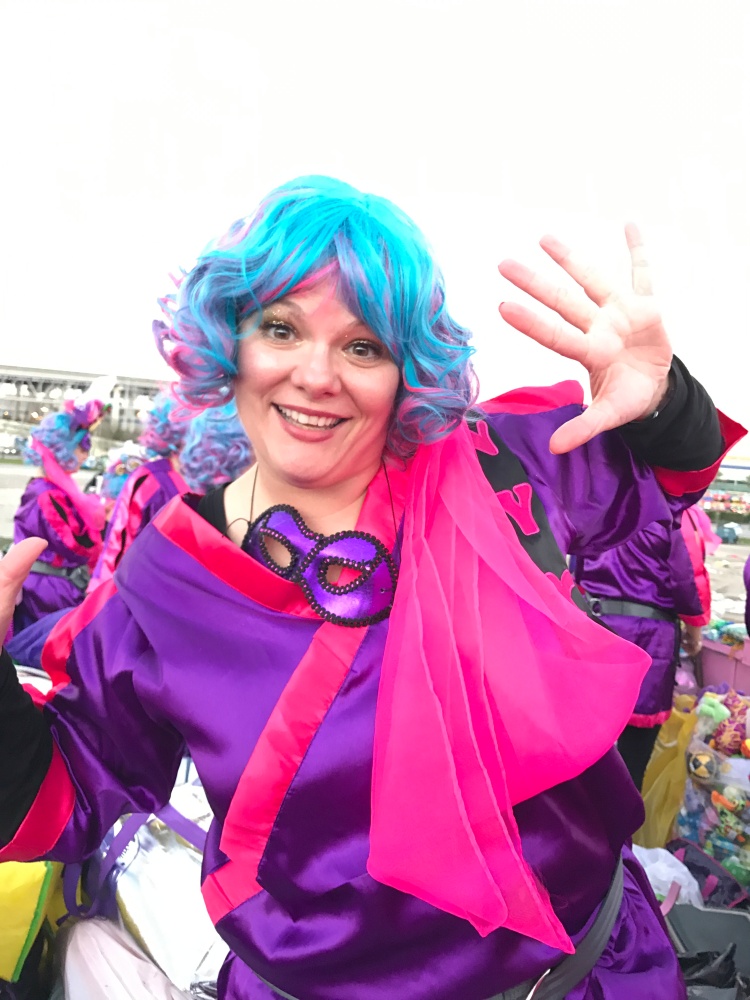 I’m sure we were stone cold sober in these pics.

After a few hours, it was time to go! It had rained quite a bit the day before, so our float got a bit stuck in the mud and it took a bit to get out of it, but soon enough we were on our way! Well, on Tchoupitoulas, the road I drive on every day on the way to get the kids from school. That’s where the floats line up before the parade. It was so beautiful with the sun going down, the cool breeze blowing through my polyester curls, a daiquri in hand…

We were on Tchoupitoulas for three hours waiting to get going. We hung out, read books (thank god for the Kindle app on my phone), chatted, went into a bar (we were stopped so long we got off the float), and reorganized our throws for the tenth time. Finally, we turned the corner onto Jefferson, then hit Magazine Street. We were off!

I had made a list of the friends I had along the route. I looked for signs and threw beads and purses and bracelets and spears and about a million Nyx-branded throws.

The best parts were seeing the people I knew, but nothing could beat seeing George and the boys and a bunch of my friends. We waved and yelled and I gave them a huge bag of fun stuff, and we blew kisses and the boys were jumping up and down giddily and too soon, we had rolled past them and they were out of sight. (Just as well, it was 10pm by that point and the boys had school the next day.)

Megan did a photo burst as we passed everyone. Yay!

A pic of me throwing stuff: 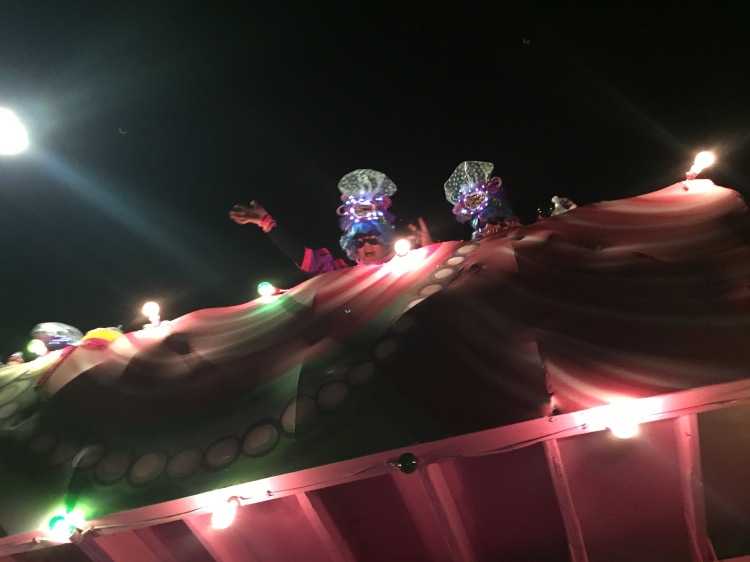 The rest of the parade was more throwing, more waving at friends, more and more fun. My neck was killing me so I had to take the headpiece off.

A video I took as we rolled down St. Charles Avenue:

Near the end, as we passed Gallier Hall: 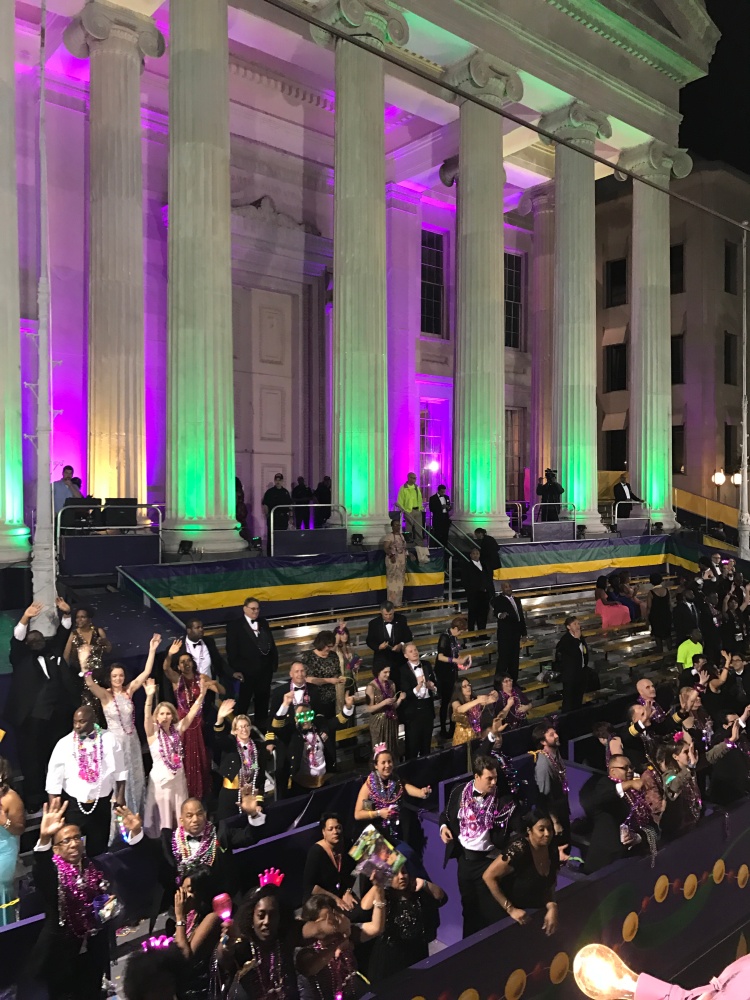 I really loved it when we got down to Canal Street at the end. It seemed to be a lot more tourists down there (which makes sense, it’s where the hotels are) and they were very grateful for whatever you threw them. Uptown, people wouldn’t bother to pick up anything off the ground. Argh. THAT WAS A PERFECTLY GOOD KOOZIE SIR. That kind of thing was what I yelled a lot.

So after it was over, we got off the float and…went home. Kind of anticlimactic, but it was midnight at this point and I was exhausted. Would I do it again? Probably not. I had a fun time, but to be honest, it’s a lot of pomp and circumstance that isn’t really me. Also the expense and the time, I dunno. I’m really, really glad I did it once, though.

And now I can enjoy the rest of Mardi Gras with no stress!

This weekend, I went to a ball! Oooh, fancy. Well, I’m riding in a Mardi Gras parade this year for the first time (one of those things to check off the ol’ bucket list, if I were the type to use the phrase “bucket list”) and part of being in a krewe (no, that’s not a mispelling) is that there’s a fancy ball.

There are all sorts of rules like you have to wear a mask and you have to wear a floor length gown. FLOOR LENGTH GOWN? This was sounding expensive. Fortunately, my friend Lorie had a dress that I could borrow. I was skeptical, since Lorie is about 6″ shorter than me, but magically, it fit me perfectly!

Anyway, I had the dress. I ordered a mask off Amazon. Terry’s daughter was coming to braid my hair to put in an updo. My friend Jenn was lending me some jewelry. I joked that I felt like I was Cinderella and they were the little birds and mice coming to dress me.

In the end, I felt more like an glamorous screen siren than a princess, but whatever.

We had a full on photo shoot while some of the residents of the assisted living facility looked on. 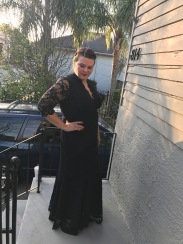 Soon, my chariot arrived (Jenn’s Jeep, that is) and I was off to the ball! 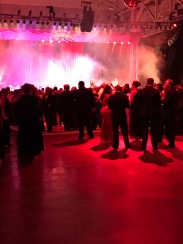 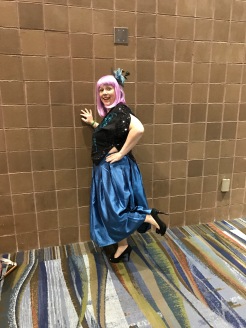 If some are blurry, it’s because there was an open bar.

Anyway, in true Cinderella fashion, I was home by midnight. Only because I’m at least twice her age, and I couldn’t hang that long. But at least my glass slippers (er, black flats) both made it home safely.

15/14/13/12/11/10/9/8/7/6
There was seam ripping and deconstruction and reconstruction and things being taken in and things being taken out and some cursing and a lot of laughing and a shitload of learning. Thanks @lladybird for another fantastic workshop at @papermaplestudio! #ilovesewing #workingonlovingseamripping
Put the Christmas village I made on the mantle. I think I incorporated my #schittscreek ornaments quite nicely, yes? #moirarose #watchesusall #roseapothecary #rosebudmotel
They’ve barely changed at all. 😭
Join 2,593 other followers