New Year’s Eve…do you say the year that just passed or the one coming up? I guess it’s the one coming up. One of those things that always confuses me but I’ve never actually just figured out once and for all. Okay, so let’s say it’s New Year’s Eve 2015 (but Eve is in 2014, that’s why I get confused, but it’s the eve of 2015, so yeah. Confusion.) Since the boys were born, most years the boys have spent the night at Granny and Grandpa’s so George and I could go to the pub.

And the year after that, they had their tubes in/adenoids out on New Year’s Eve, so that was a quiet night in.

Except the year they were a month old. Or maybe we did go out – I think my mom came to stay that night. That time is a bit of a blur.

But ever since then, we’ve gone to a friend’s house or the pub or done something. But since I leave for Barcelona in a few days, I told George he could go to the pub and I would stay home with the boys. No problem. I’d finish the book I was reading, have a little wine, go to bed early and wake up refreshed in 2015.

Except…I opened my big mouth and asked the boys if they wanted to stay up til midnight. Linus and Miles were gung-ho, but Oliver noted that on previous attempts to stay up late, his eyes would just close because he got tired. Heh.

So, we stayed up. At around their usual bedtime (8:30ish) they started getting a little sleepy. Hours yet to go, but they were determined.
Now, I know what you’re thinking…why not just put on that Netflix countdown at 9:00? Well, we live close to the river and you can actually see the fireworks from our front porch, so I’d actually told them they could see the fireworks at midnight.

Which also makes it impossible for me (a light sleeper) to be asleep at midnight anyway. So. Midnight it is.

The boys played video games, we watched some TV, I put on a movie, and I gave a late snack of sugary cereal.

At around 10:45, Miles and Linus waved the white flag. They went to lay down in their beds, but with the lights on so I could wake them at midnight. I humored them, but I knew that they would be impossible to budge later on. 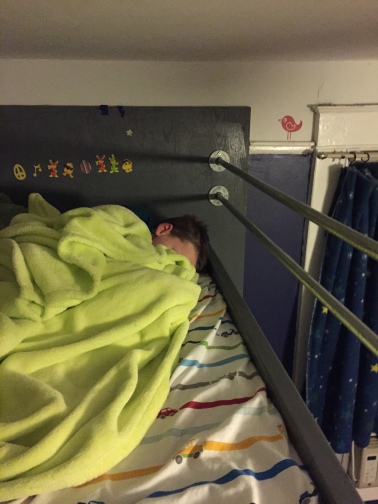 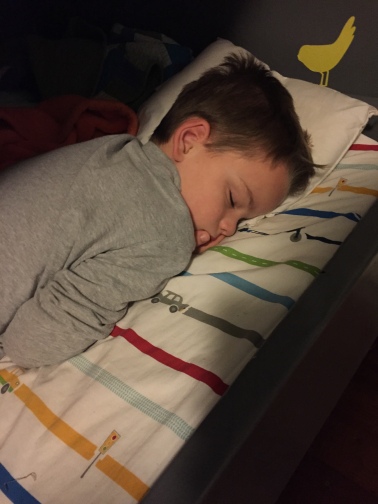 Indeed, when I went back at around 11:45, they briefly opened their eyes and told me they’d rather sleep than watch the fireworks. Alrighty then!

Oliver, though, the one who thought his eyelids would fail him, was still full of good cheer when we watched the ball drop on Times Square at midnight. 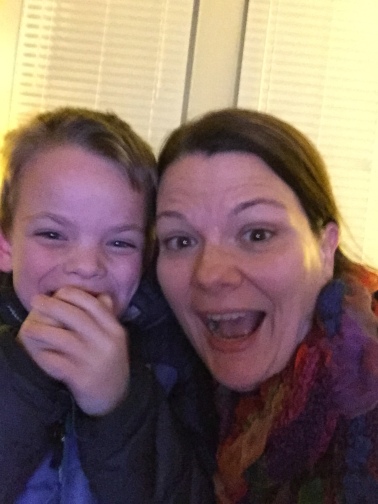 Oliver is the last triplet standing! 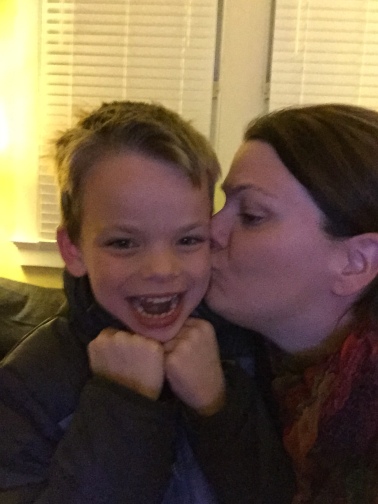 We went out on the front porch, where, through the trees, we could see the big display that the city puts on over the river. After all that anticipation, though, Oliver was too cold to stay outside more than a few minutes. Ha ha!

Linus and Miles woke up this morning rather perturbed at me for missing the fireworks. Ha! I told them we’d get some sparklers today and light them tonight for our own mini display.

Paddington has been pantsless for three years. Today, @mileskocke and I fixed that. We used a very scaled down version of #walktheplankpjs from @patternsforpirates. #sewingwithkids
Sewing masks on my grandmother’s Singer from 1950. As you can see, I’m still a bit nervous about going fast with it. But I’ll get there. I am getting the appeal of a straight stitch-only machine, that’s for sure! #vintagesinger #ilovesewing #sewing #sewcialists #singersewingmachine
Ahhh the gray is coming in nicely! #grayhairdontcare
Ziggy has really let himself go. #dirtydog
I did it! First splat points in over two weeks. 😅🏆 Missing my coaches though. 😭 @otfnolamidcity #orangetheoryfitness #orangetheoryathome
Finally got to bring in my package from @blackbirdfabrics! Swooning over this lagoon viscose crepe and the dark green stretch corduroy. (I mean yeah maybe the latter isn’t practical but who cares about practical right now?) Plus I threw in some @kylieandthemachine labels. What to make, what to make?!? #fabrichoarder #sewcialists #ilovesewing #sewing #sewnola
Your timing is impeccable, @bonappetitmag. #coronabaking
Two days of bagels, two different recipes, two batches of lumpy and misshapen 🥯s. (But still yummy.)
We’re not going out for sushi so I made this and the boys went nuts. Basically a crunchy roll bowl. (Sushi rice, seaweed, snow crab, panko for crunchy.) Big hit with the boys and way less of a pain to make than rolls. 🍱 🍣