You know what’s funny? I was going to try to blog every day of my sabbatical.

So, I’ll just update you on what I’ve been up to in my days of leisure since my last real blog post. One pic per day. (ish)

Day 2: Sewed a ton. Made a Christmas tree skirt! (I know, I already blogged about that.)

Day 3: Finished 20 toast-themed scrunchies for a friend who owns a local chain of restaurants called, you guessed it, Toast. (yum)

Day 4: Stephanie and I wore the Mexican tablecloth skirts I made while we sang a duet of The Christmas Song. Just be glad this isn’t a video.

Day 5: I went Christmas shopping and got the boys this ornament. Summed up their 2018 nicely.

Day 6: Finally! Kiki’s annual box of cookies arrived! And the jersey Linus ordered that was almost exactly like the one I had ordered for him for Christmas! (Just a different player on the back, which fortunately makes it EXTREMELY different in his eyes.)

Day 7: Finally! The day I had been waiting for! I was so nervous and excited and nervous but I got to Children’s Hospital, and the volunteer coordinator walked me up to the NICU. She asked if there were any babies to be held, and thank goodness there was! After I washed my hands thoroughly of course, I was gloved and gowned and handed the sweetest little bundle who settled as soon as my arms were around them. All of the nurses who walked by smiled and commented that “that one just looooves to be cuddled.” Three hours passed in a flash. It’s so weird. You can’t have a phone, obviously, and there’s nothing to do but rock and stare at a sweet little face and keep tiny tootsies covered (“Miss Pam’s rule is that tiny tootsies must always be covered!”) and tell them step by step how to make pajama pants (I’d made like eight pairs over the past few days) and get lost in your thoughts. It’s very very relaxing and almost meditative. And heavenly. I really thought I’d be bored, or that my arm would get sore or tired, but none of those things happened. After that baby needed to be fed, there was another one in need of some Miss Pam snuggles, and that one was wailing in their crib but as soon as they were in my arms, fell right asleep and didn’t even stir for the rest of my hour there.

I left the NICU with the biggest grin, just on cloud 9. Because of privacy rules, I’m obviously not going into a lot of detail, and not asking about details, just taking whatever baby they give me, and giving it whatever warmth and comfort I can. And warm tootsies, of course.

Oh, and after that, I gave blood. Because why not? (Me, back at home, still giddy and proud of my shirt and name tag and sticker.)

Day 8: Lots of sewing! Terry had asked me to make jammies for her nieces and daughters and I was also making them for Kiki, so the next three days were a blur of nothing else, really. Well, I also made this scarf for Kiki, which in retrospect was, um, kind of big. But she can wear it if she’s outside and it will really be warm and also it has a hidden pocket. So. As long as she doesn’t have to see or breathe or turn her head she’ll be fine.

Day 9: Linus wanted to make a scrunchie for the little girl he got as a secret Santa recipient in his class! He was insistent that he made her gift – that was the rule, after all. So I showed him what to do and only helped on the really tricky part. He was so proud!

Day 10: Okay, I don’t have a picture of the Christmas parties at school that I attended (or the scrunchie in the aforementioned girl’s hair, because she did wear it, but I could show you where I trimmed away the ivy from the driveway in a fit of rage because it’s encroaching so much that I can’t get out of the car without being ankle deep in ivy but that’s not really exciting so I’ll just leave today picture-less. But that’s what I did that day.

Day 11: Took Oliver out in the morning to shop for his brothers and to lunch (Chipotle). He really wanted to get them the perfect presents, and we ended driving up and down the major thoroughfare in Metairie several times, going to these two soccer stores, not finding anything, until I insisted we just go to Barnes and Noble, where we got a cookie and he finally got them gifts. (A stuffed turtle and a sushi making kit.)

Later, Miles and I went to dinner (pizza) and shopping. He ended up getting Oliver a comic strip drawing tablet at B&N and Linus a popcorn making machine (very popular gift. In fact, I tried to dissuade him because I had already bought the boys a popcorn popper. Which I returned.) PS Miles ate mozzarella sticks for the first time ever and liked them. Duh. 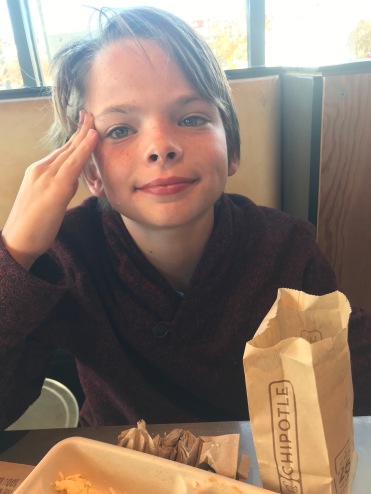 Day 12: Took Linus to lunch (sushi) and then knocked out our gifts at the Walmart down the road – little arcade game replicas for his brothers (Skeeball for Oliver which I’m totally stealing and Pacman for Miles.)

Day 13: Christmas Eve! Made steak for dinner, as usual. Set off the smoke alarm, as usual. Had a lovely evening. Gifts were wrapped by mid-afternoon. Worked out at Orangetheory. Made a French toast casserole for Christmas breakfast. Took a picture of the boys with their stockings. Read the Night Before Christmas. Attempted to escape werewolves, but will try to finish another night.

Day 14: Christmas! What a great day. The French toast casserole was delicious. I drank mimosas out of our wedding flutes (which had to be scrubbed really well, having not been used in 13 years), then we opened gifts. Everyone was really happy with what they got. The boys loved their jerseys and the gifts from each other, and the giant goal that Santa brought them. I loved the earrings that the boys picked out from Bea’s shop, and the earbuds and sewing stuff that Kiki sent me, and the Instant Pot accessories and new running shoes that George got me. I hope George liked the Ziggy socks and old man sunglasses and beard trimmer that we got him! Afterwards, Grandee and Larry came and we all went to the pub for lunch and that was the only point where the boys were grumpy, but they were fine once we went home again. 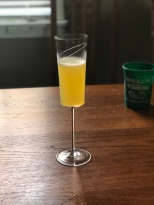 Day 15: I returned stuff that needed to be returned, and went to the store, and it was all surprisingly pleasant and not at all crowded. Weird. I took the boys to get sushi and to get stuff to make sushi (nothing fancy, just crunchy rolls) and for dinner we made them and also the chocolate chip cookies that Tasty deemed the best. They weren’t bad, but quite a lot of work, like browning butter. I’d like to try an easier recipe next time.

Day 16: I had another shift at the hospital, and got to hold another sweet baby! Just the one – they didn’t have any more babies after that for me to hold, so I went home early. I FINALLY finished the skirt I’ve been working on since July (blog post coming eventually about it) but I’m not happy with it, and it makes me sad and depressed, so I don’t want to talk about it anymore.

Day 17: So excited! I was meeting up with Ren and some other friends from high school for a show at the House of Blues. It was a Smiths cover band that we were supposed to see last year at Christmas, but the show had been canceled. So I’d been waiting a year for this. Anyway, long story short, it was AMAZING. I didn’t have high hopes for a bunch of middle-aged dudes from Louisiana covering Morrissey and the Smiths, but it was so good. So fun. It’s been so long since I’ve been to a small show where you knew all the words to all the songs. I guess it was like when Kiki and I saw Pulp in NYC. Sorta. (Kind of hard to compare anything to that.) Anyway, I hope they play again soon! 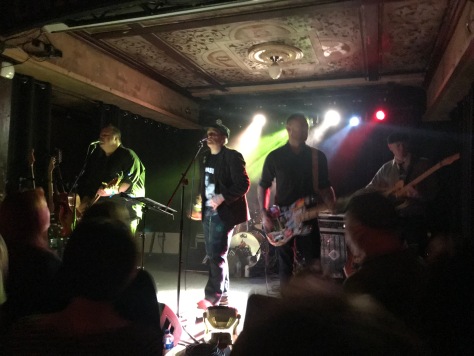 Day 18: Cleaned out my sewing room. So satisfying! Brought two giant garbage bags full of stuff to the thrift store. Woot! And finally threw away a box full of negatives. I think it’s okay. Ren’s been divorced for like 10 years.

Day 19: Worked out. Went to Costco and grocery shopping. It’s so gray and gloomy. I need the sun to come out. Got this for tonight. Going to stay home with the kids and a friend and her kid.

Okay! So that takes us up to today, New Year’s Eve. It’s currently pouring rain. Hopefully, it’ll stop by tonight so we can go watch the fireworks.

See you next year!