At George’s request, I took the boys to a cavern today so we could go underground. (The man was a mole in a former life, I have no doubt.) So we met up with my friend Emily and her three adorable children at Inner Space Cavern north of Austin.

The boys were enthralled (every day I realize how much they take after George and how little they take after me) and had a great time. I had a nice time, but they really loved it. I told them Daddy will take them on a more adventurous cave tour when they’re older. A boys trip. Sounds great to me! 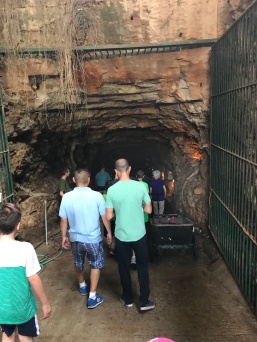 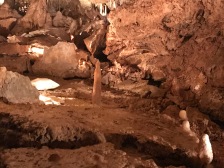 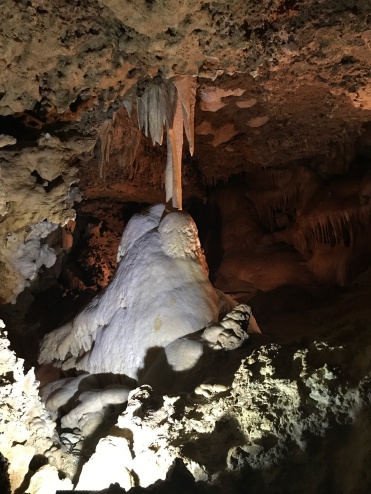 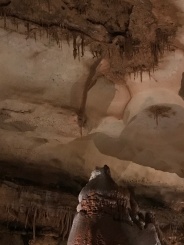 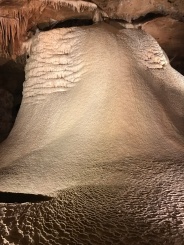 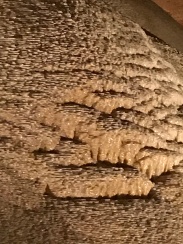 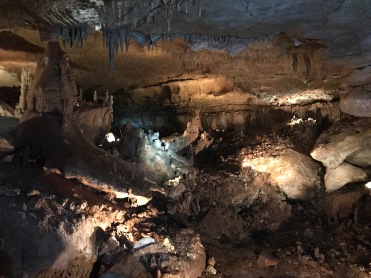 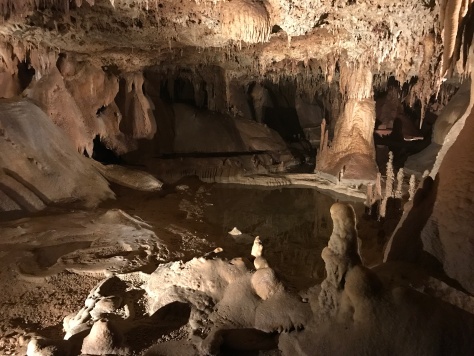 (It’s a much better post title if you sing it to the tune of Proud Mary.) 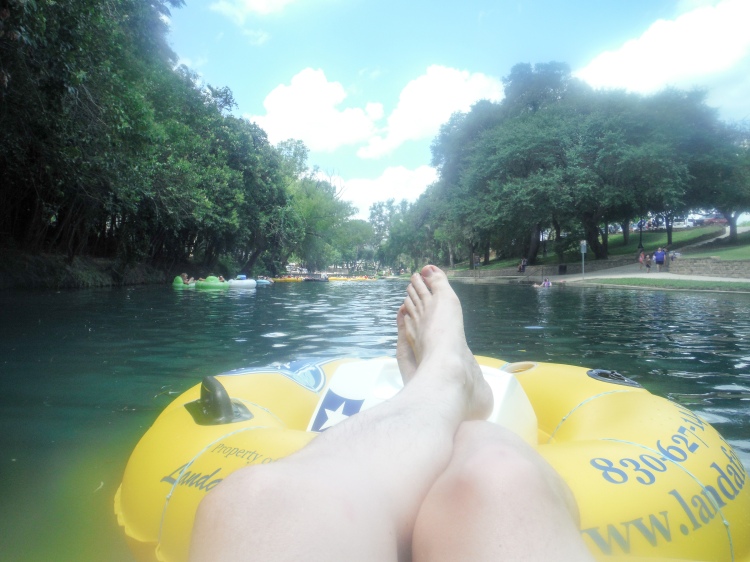 Today, on the advice of a pal, we took the kids tubing in New Braunfels, on the Comal River. (We being Deborah, her husband Tom, and our coworker Elizabeth; kids being my three and Deborah and Tom’s two.) I bought a Texas-themed Igloo cooler just for the occasion. (And I mean, what other states do this? Where else can you buy coolers with the state flag, and in what other states do all hotels have state-shaped waffle irons? Are there any other states like Texas?) 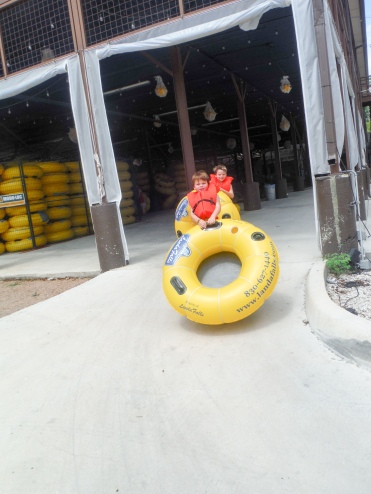 We started from a place called Landa Falls, basically a river outfitter where we got inner tubes for us and the cooler, life jackets for the kids, and a locker to keep all of our stuff.

It didn’t start off promisingly. We went down to the river to get in, and it was basically impossible to stay together. The current wasn’t super strong, but the river was deep, and it was just fast enough to make it hard to go where you wanted. 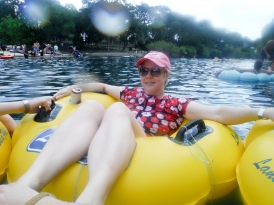 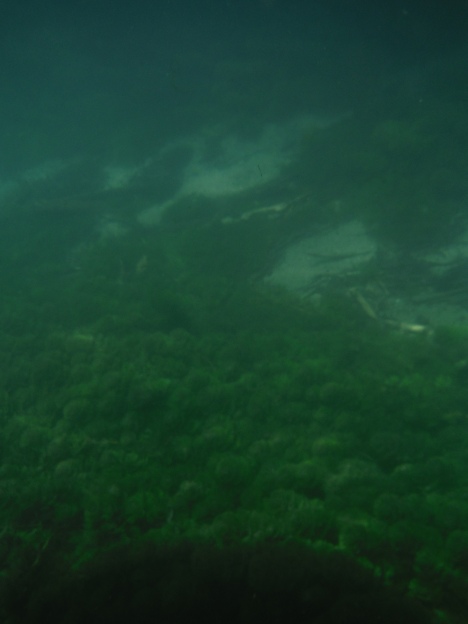 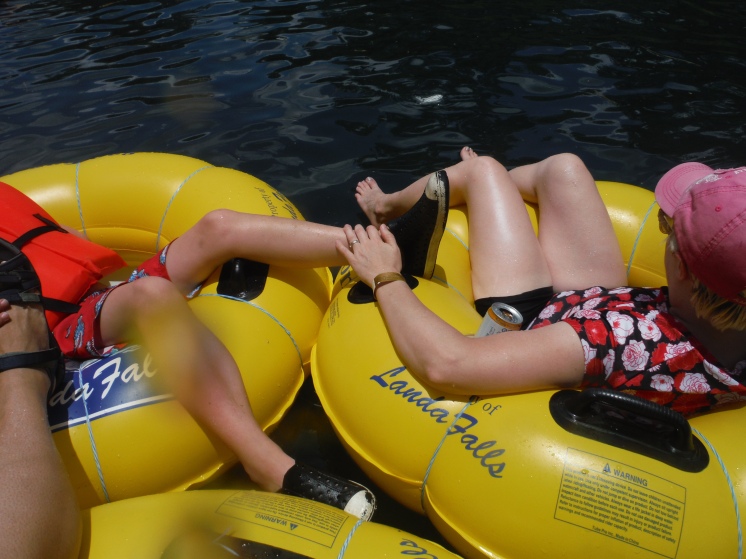 Linus in particular was not happy if we weren’t all together (they always had an adult with them, I’m not a monster) but they all wanted to be together. Eventually with much swimming and grabbing on to the side and leg cramps (all on my part) the boys and Elizabeth and I all managed to get in a group, each holding on to another tube’s handle in a group so no one could float away.

The problem is, the other group had the cooler! And we were thirsty! And my camera was in the other cooler! After about an hour or so, we got to a point where we could get out. (I make that sound so easy, but it was not. There was swimming and pulling tubes and slippery rocks and more leg cramps.) 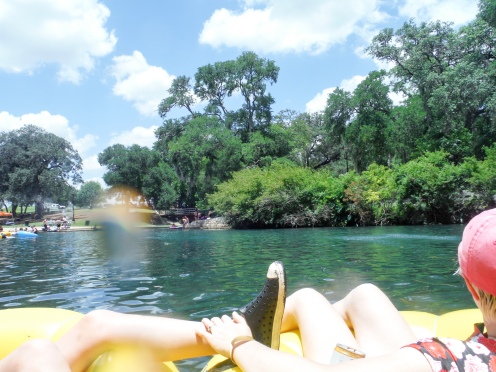 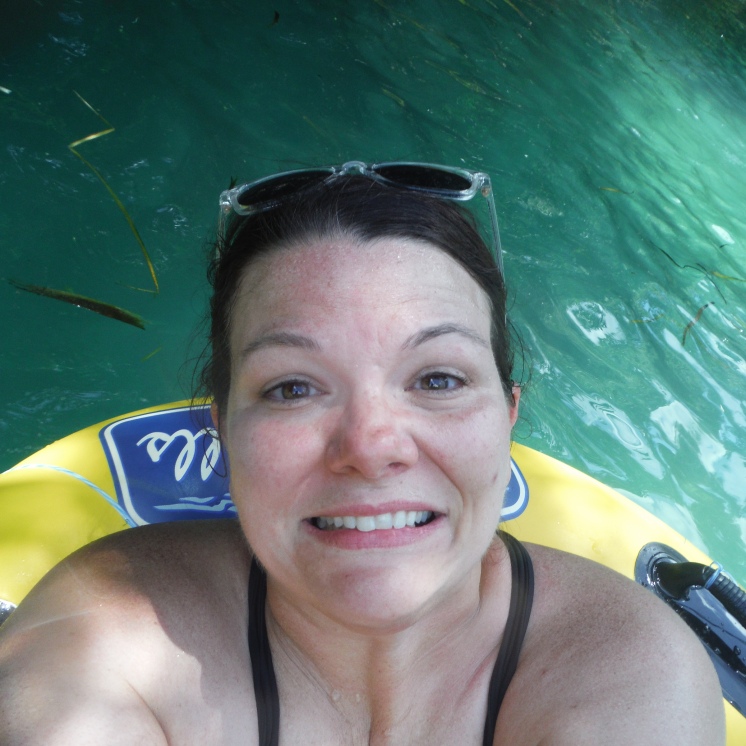 Everyone else except for Deborah’s kids were ready to call it a day. I was not. (Turns out tubing isn’t cheap.) So in the end, Oliver and Linus went with Tom to get pizza, and the rest of us decided to keep on tubing.

Now, I love pizza, but I’m really glad we kept floating. It got more fun – there were chutes! Like tiny waterslides! The current got a bit faster! And if I’m completely honest, it was a lot easier to keep track of one kid instead of three. (Especially when the other two weren’t really into it.) The river was beautiful, clean and blue, and with not a lot of creatures in it. (I’m not really into natural bodies of water, for the most part.)

Eventually, we got to the end, hauled ourselves out of the river, and made it back to meet the other three.

Would I do it again? Sure. With a few grown up friends and a bunch of rope to tie us together. I really would have loved to swim more in the river, but the only time I did was to haul a kid out or swim against the current. At one point, I was trying desperately to get Miles out before we got sucked down a chute, and I was against a strong current and he was panicking (he was perfectly safe, he just didn’t want to go down the chute) and so I was swimming with all my might to the side towing him and my tube and there was nowhere to hold on to and….anyway. Yeah. Next time, no kids and a rope to tie myself to my tube so I can swim sometimes and not worry about my tube. 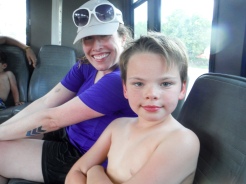 I swear I took this yesterday, just didn’t have a chance to post it. (Deborah and I were too busy watching disaster movies.) 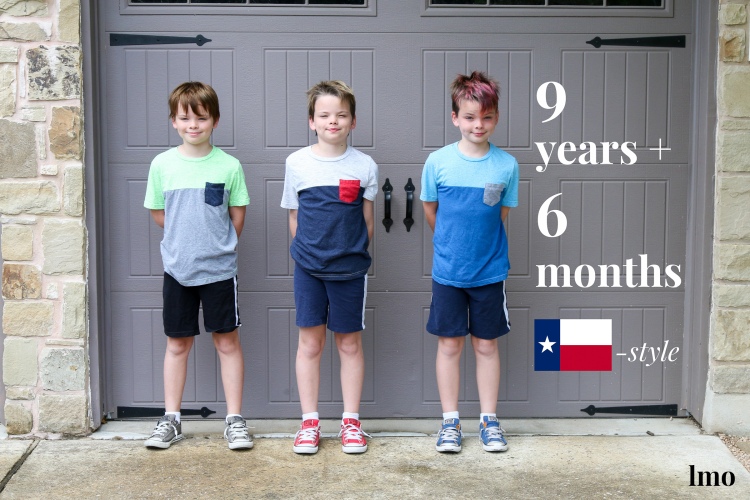 Yeah, we’re in Austin now, housesitting with Deborah’s family for another coworker. So far we haven’t done a whole lot, just relaxing, going swimming, working, that kind of thing. Yesterday we attempted an urban adventure quest downtown, but it kind of went to pot when it started to sprinkle, then everyone was hungry, and Miles’s ear started hurting. So after lunch at a pizza place and of course a Voodoo doughnut, I took Miles to urgent care where he was diagnosed with a double ear infection. Poor bunny. 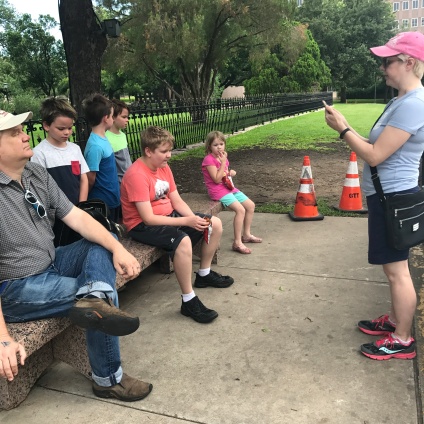 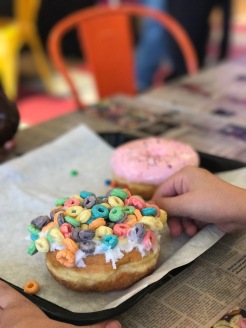 It’s been a while since I wrote a regular old boring blog post, so here goes.

The boys had their third guitar lesson yesterday. They still like it! Ha! They’d better, at what it’s costing me. There’s still some frustration about getting chords right and finger placement and finger (it hurts to press on the strings!) but no one has given up yet. Ha.

I say “boys” but really it was just Oliver and Miles. Linus is still sick from whooping cough. Even though they had all of last week off, he’s still getting sent home from school every day because of the cough. It doesn’t sound good, that’s for sure. I’m so ready for this to be over. I’m so ready for him to complete a whole day of school. Especially because the nurse said she’d bake us a cake when all three made it through a full day. I’m thinking yellow cake with chocolate frosting and sprinkles? Yes?

Also next week is the big standardized testing week so he has to stay in school all day. I can’t have one triplet repeating third grade! (Don’t worry, that won’t actually happen.)

On Sunday, I accidentally signed up for two Orangetheory classes in a row. I figured, why not just do it? (The alternative being to pay a $12 cancellation fee.) Everything was going swimmingly until the point when my back seized up and was like “nope.” So now I am in pain but got a massage yesterday which helped but thank goodness for leftover painkillers from surgery is all I can say.

I’m excited for this summer. The boys and I are spending a couple of weeks at the beginning in Austin, housesitting with Deborah and her kids. It will be fun! We’ll be able to work together and the kids can all play and we can go swimming and all sorts of fun stuff.

And then there will be a work trip to Orlando, and some Kiki visiting, and possibly a trip at the end of the summer to DC to see Aunt Jenny’s giant house finally. We’ll see.

We’re really enjoying the patio. The giant piles of dirt are finally diminishing, and once my back is better I hope we can get some hedges in. I’m also dreaming of a hydrangea bush, but I’m not known for my green thumb so it might not be the best idea. But maybe.

Ooh, this is exciting! The movie Miles filmed last year finally has a release date! It’ll be in theaters in June and then it also have a VOD (video on demand) release date a few days later. I’m really hoping it will be playing in a theater in Austin while we’re there. The production company that made the movie is based there, so I’m hopeful. We’ll see. Fingers crossed! (I won’t be taking the kids to the theater, but at least we can show them Miles’s parts on demand a few days later.) I also hope his part wasn’t left on the cutting room floor. Hmm.

In happier news, two of my baby cousins are having babies! I mean, they’re not exactly babies anymore, they’re grown women, but they’ll always be my baby cousins. They’re due a month apart, and neither know what flavor baby they’re having. How is it that I had no problem not knowing the sex of my babies, but when other people do it I get wildly impatient?

Anyway, they’re adorable, and I can’t wait to take lots of pictures of their squishy babies! (I’m convinced both are boys. Well, at least one is a boy I’ll bet.)

Quick rundown of other things…Ziggy is free of heartworms, we got a new fancy thermostat (not Nest, but like Nest), sno-balls are yummy, I got to drive a fancy Corolla for a week, Miles and I had a streetcar/beignet adventure last week, and we played Monopoly.) 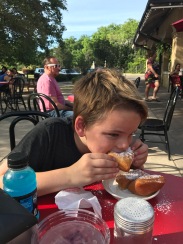 I got back the other day from a week-long work trip to Austin with one of the two teams I work on. It was a great week of bonding (we have a lot of new Automatticians on the team that I hadn’t met yet) and eating. I have decided that if it came down to food, I’d much rather live in Austin than New Orleans. 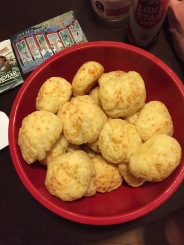 Lucky us, we had Brazilians making us pão de queijo

How the sausage is made. 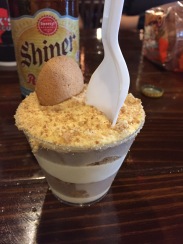 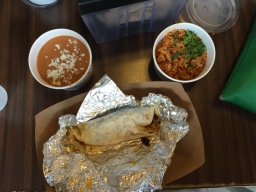 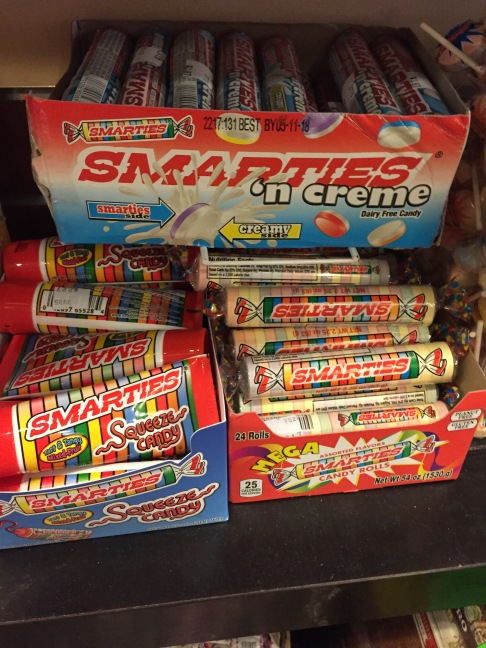 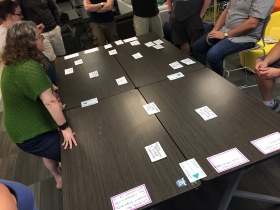 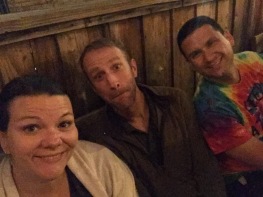 You can see where we got our t-shirt inspiration 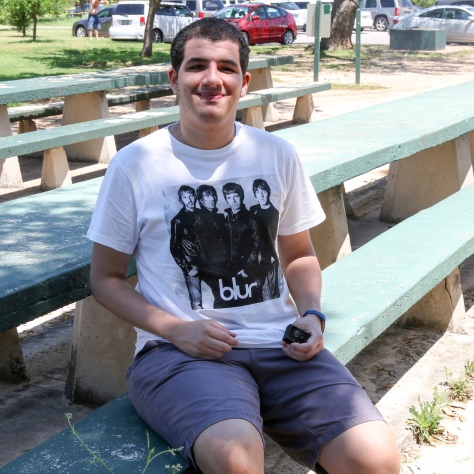 Brazilian t-shirts are the best 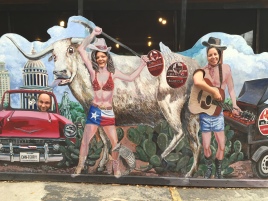 I look good in a bikini. 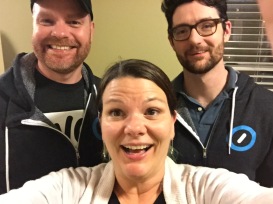 JOEL and me and Simon 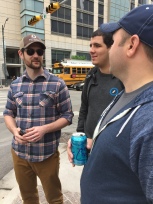 Simon and Livio and T$