How’d that happen? And I haven’t blogged in forever. So let’s see, how was January?

Lots of working on our house float, which is SO AWESOME I COULD DIE. (It’s not at my house, it’s at Chris and Stephanie’s house, and oh my lord it is so good. I want to do a complete post just on the house (also it will be getting more finishing touches) but here’s one that I haven’t posted on my Instagram:

So good. So good. And the Today Show camera people came by yesterday to film it, so you might see it there!

This is all leading up to Mardi Gras day, when we will be outside being the Krewe of Moiras, all dressed up and handing out very special throws. (Or tossing them from several feet away. Safely.) Follow #kreweofmoiras on Instagram so you can see how obsessed we all are with Schitt’s Creek. (A lot.)

I also spent a night in Baton Rouge this week to help my mom who had shoulder surgery. It was weird to be away from the boys. It’s been so long. I kind of missed them?!?!

This is kind of sad. I just looked through the pictures on my phone to see what I’ve been doing for the last three weeks, and it’s all photos from working on the house float and Ziggy. I’d say I need to get out more but that’s definitely not true.

Okay, here are a few. Got my new AirPod Pros for working at Automattic for 7 years! (Which was back in November but they took a while since they’re custom.)

Yeah I did the Bernie meme, and it got more likes on Instagram than any other post ever. Yeesh.

So yeah, I guess that’s it for now. Tomorrow is the monthly picture, and after that I’m hoping to have a post all about the house float.

Our tradition of me taking each of the boys shopping and out to eat individually looked a little different this year. We weren’t going to leisurely peruse stores for gifts, and we weren’t going to be eating inside any restaurants. But we still had fun.

Miles and I hit Target and then Five Guys. Is there anything more depressing than eating burgers on a gray, cold day at an outdoor table next to the parking lot and a busy commercial thoroughfare? I guess there is but I don’t want to hear about it. At least the burgers were delicious and Miles wasn’t complaining.

Oliver and I had a similar journey, but his requested meal was Popeye’s, so we had no choice but to bring our chicken sandwiches home. I was not sad about that. There are no photos of this jaunt.

Linus and I went to have brunch at Tartine, which has a lovely outside patio. One could say he lucked out. They have the most delicious baked eggs in brioche, which I can never not get. Yum.

Christmas Eve was pretty quiet. We had some incredibly delicious steaks that Kristina and Mike sent us. I was terrified of overcooking them, so maybe I went in the opposite direction (well, not for me – there’s no such thing as undercooking a steak to me) but no one complained.

Steak is our traditional Christmas Eve dinner, and we were able to partake in most of our other Christmas Eve traditions as well. Like…making the boys put on their Christmas stockings to show how much they’ve grown.

(I made them sit in front of the fire. Hee hee)

The first time I made them do this, they were much smaller.)

And we read The Night Before Christmas…

No one got a very good night’s sleep that night. The smoke detector right outside the bedrooms started chirping at 4am. Delightful! It took me forever to get back to sleep. At least the boys let me sleep until 7. Zzzz.

The boys got a gaming PC, or rather, all of the parts to build one. George put it together with their help later that day. They were surprised and thrilled with that gift. I got a giant Ziggy blanket (among other things) so I can’t complain. (Also a big pack of my very favorite socks from Kiki, which may sound lame was is absolutely not.)

Our oven broke sometime earlier this month, I can’t even remember when, so I decided I’d get a ham and cook it in my instant pot. That plan didn’t go well, so I gave the ham away and decided to do a charcuterie board instead on this gorgeous board that Steph MADE me! She MADE this! Isn’t it gorgeous?!?!

I was able to heat up the bread on the grill, which I might always do now. It was so good.

And that was about it for Christmas. It was quiet, but it was good.

Five years ago, a coworker dropped off this dog at our house and our family became complete.

Some pics from just the last few months of our sweet Zig Zig, who is loving quarantine.

My sweet boys at the bus stop.

An exquisite loaf of sourdough bread that I made for Thanksgiving. Recipe here.

Grandee and Larry came for Thanksgiving. We had zero vegetables.

Ziggy has been cute, as usual. We got our Christmas tree up!

Random leftover photos. Finally got the fabric for my cape! I was going to make it over Thanksgiving break, but I didn’t have the pattern yet. But it’s coming soon! Also the delicious beet salad I made. I like making things that are yummy.

Now it’s December 2 and the boys will be 13 in two days and I cannot believe it.

Lots and lots of work.

Made myself another Artists Box Top out of the Liberty lawn I bought in May. Cotton lawn is by far my favorite fabric in the world. So light but crisp and easy to sew and doesn’t wrinkle horribly. Perfect for summer. Also I’m rather proud of this one because I made my own facings instead of trying to use bias tape, which I’ve never been able to find a good tutorial for using it on a v-neck.

I also made George another button down shirt for Father’s Day. I couldn’t find any more Doctor Who fabric, but I found this one covered in cocktails at a local sewing store. (I had to make an appointment to shop. I felt v important.) 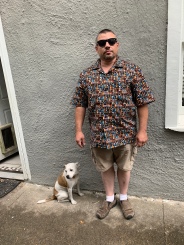 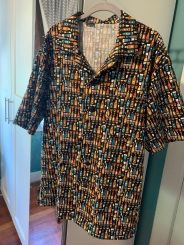 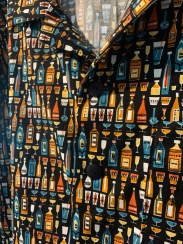 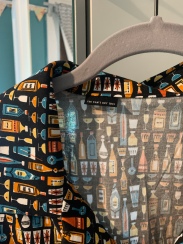 And I made myself this Holyoke sundress from Cashmerette. The top ended up a little big, and I’m not super comfortable with my arms out like this, but I’ll get over it when the temp is 100. This one is made out of a linen/rayon blend. 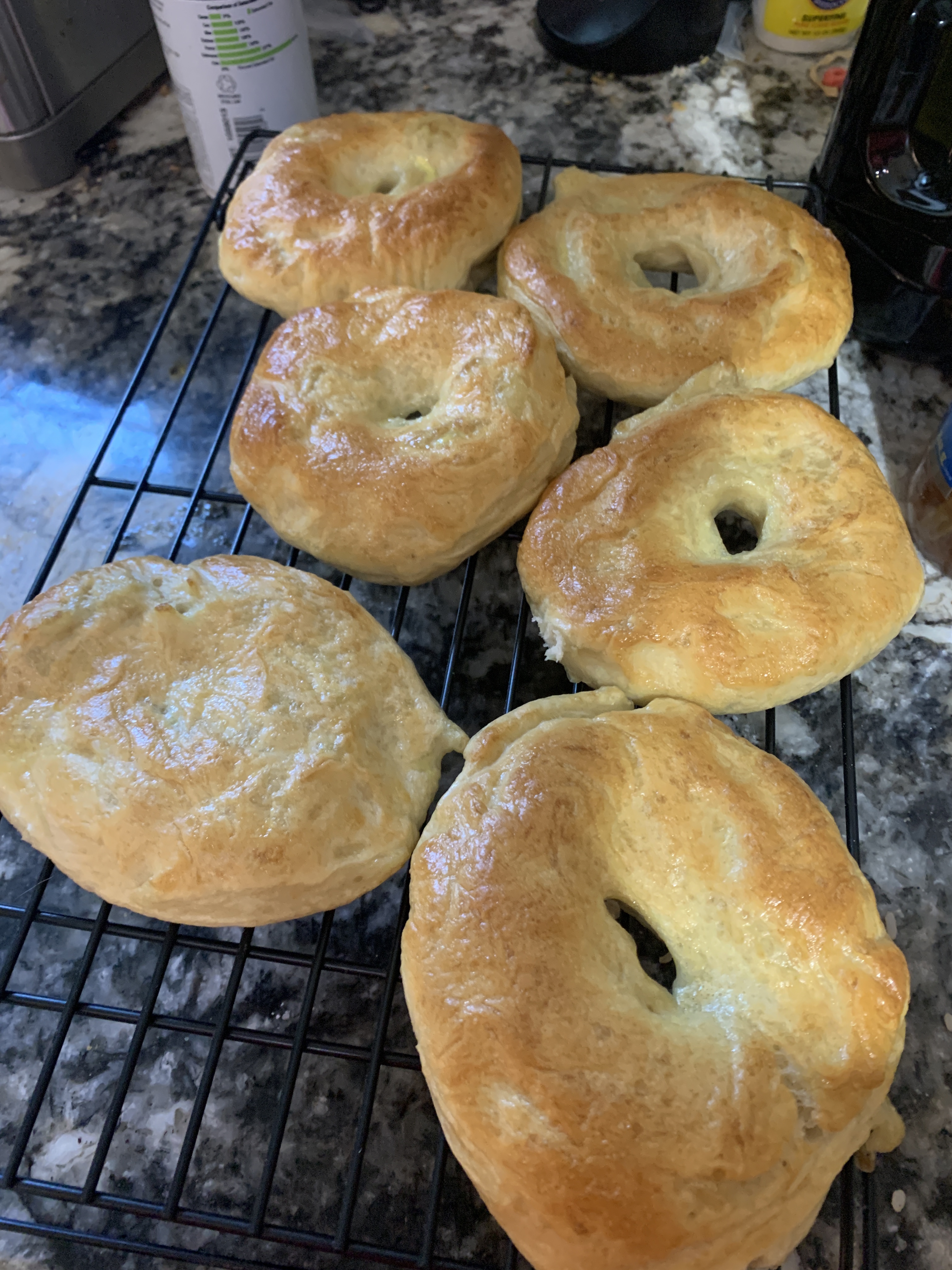 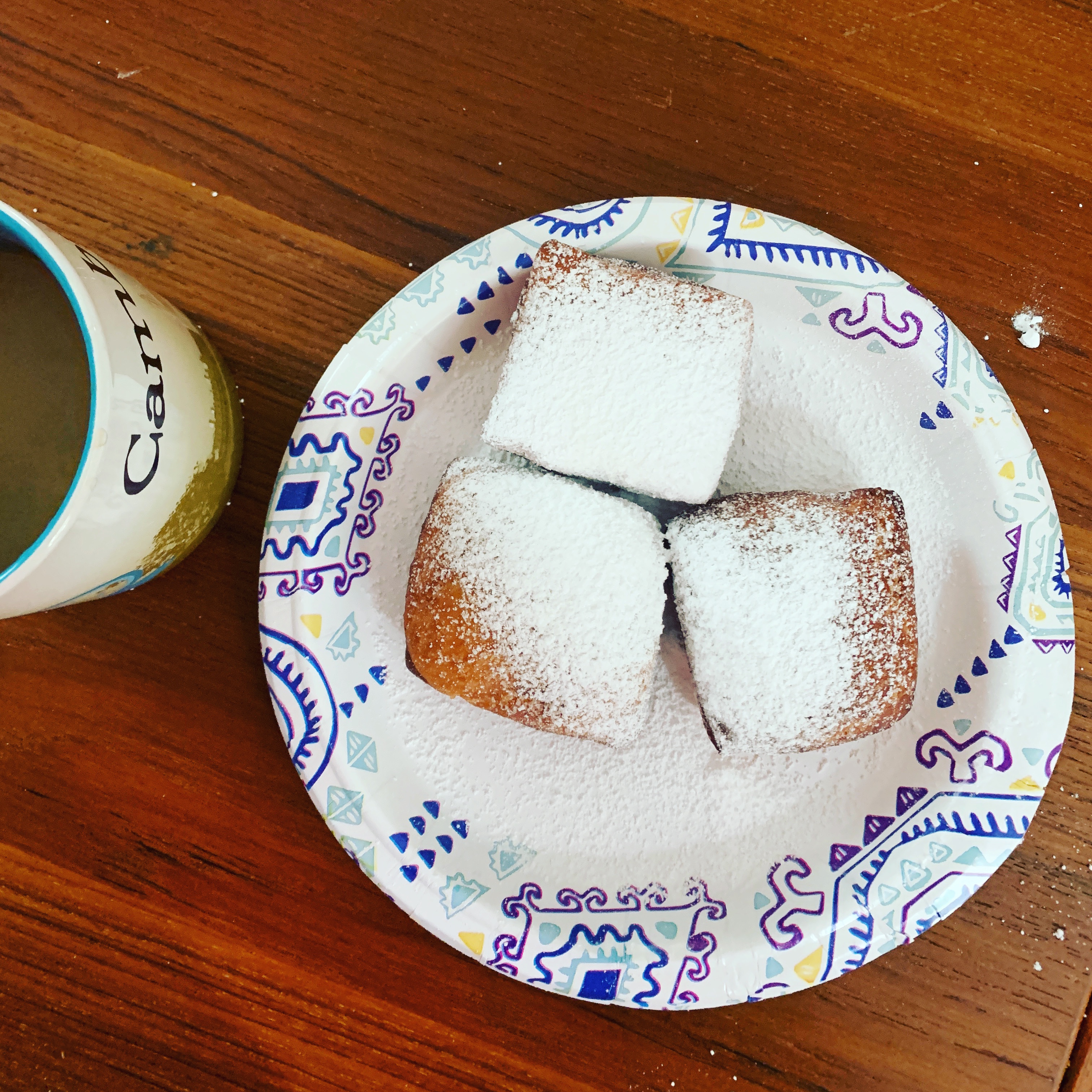 The boys and I ate at a restaurant for the first time since March! We went to Tartine, which friends of our own. It was delightful and the food was delicious and nice to feel sorta normal.

Premier League games started up again, so now it’s even harder to get the boys to focus on summer reading. 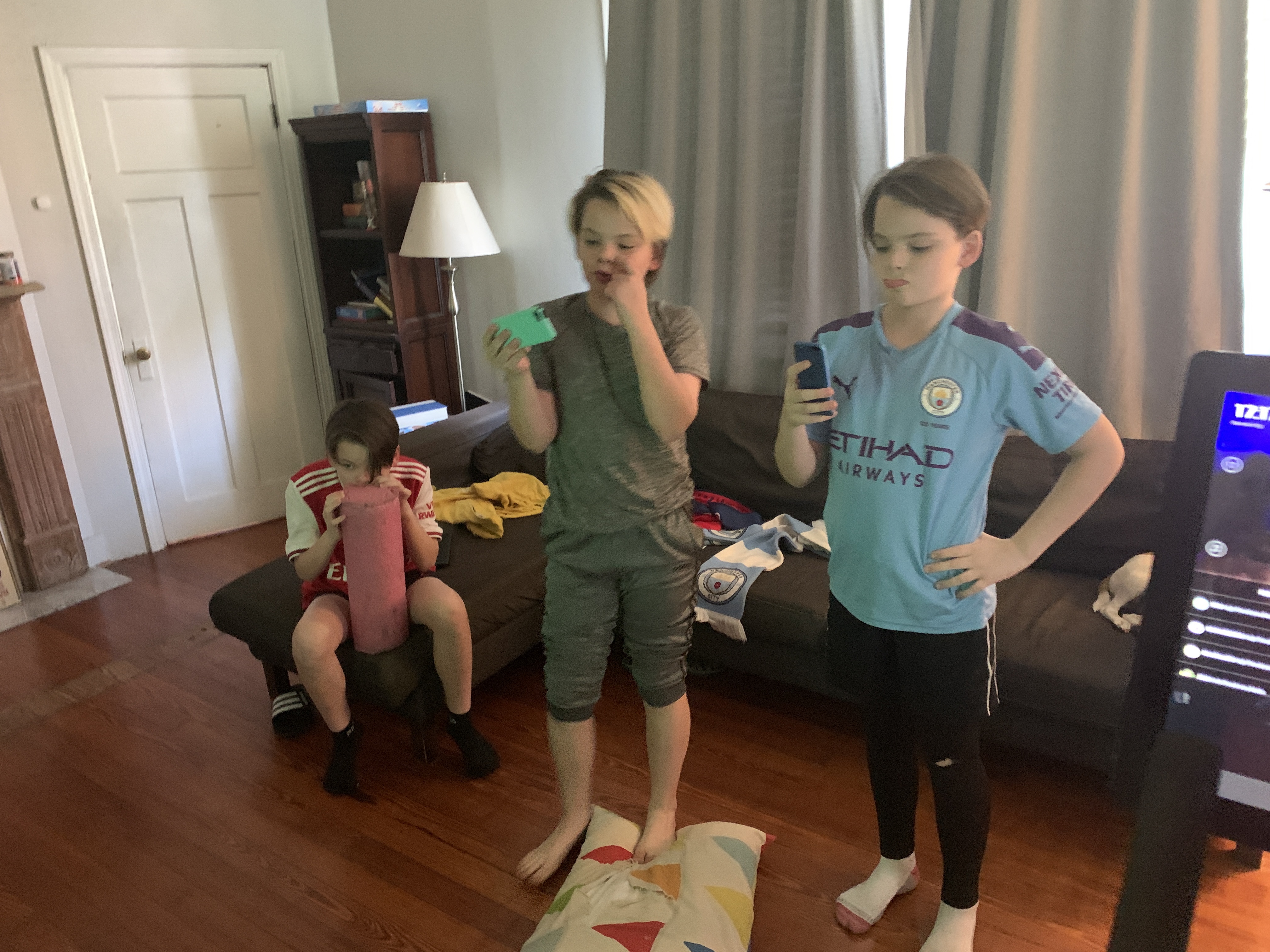 And when they’re not watching soccer or avoiding reading, they’re playing Minecraft with their cousins, which warms my heart.

My cilantro is practically thriving.

And Ziggy is as ridiculously cute as ever. He got a new collar! And I got a lick to the face!

It looks like I’ll be writing one post with more than a dozen words in it per month. I don’t know why I can’t motivate myself to blog more. It’s not like I’m not sitting at my computer all day, every day. (Work is busy.)

Mother’s Day was great. I usually leave the house and go see a movie with Terry on Mother’s Day but that obviously wasn’t an option this year. But George got me a picnic basket full of goodies from Tartine, and I relaxed and spent the day outside (the weather was outstanding) and drank a bottle of rose that Kiki had sent me. Delightful! 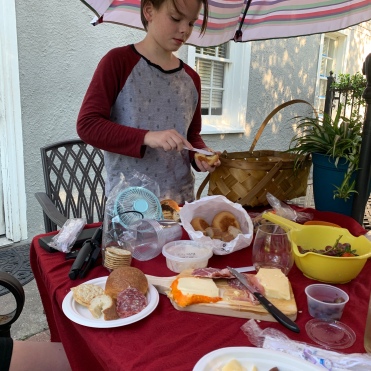 And then later that week, George turned 50! George doesn’t care about birthdays as much as I do, but I tried to make it special. Dinner was from Tartine (shepherd’s pie), I got my friend Angela to bake a cake, and I got him a bottle of expensive whiskey and this portrait of Ziggy. His favorite gift (and I don’t blame him) though was the cards the boys made him.

I’ve been sewing quite a bit – some masks, of course, but also clothes. It makes me happy. I need to do separate posts on these, but I’ve made shirts, mostly. This is all leading up to me deciding which pattern I’m going to use when I sew up this length of Liberty cotton lawn I bought when a fabric store had a sale. All the heart eyes! 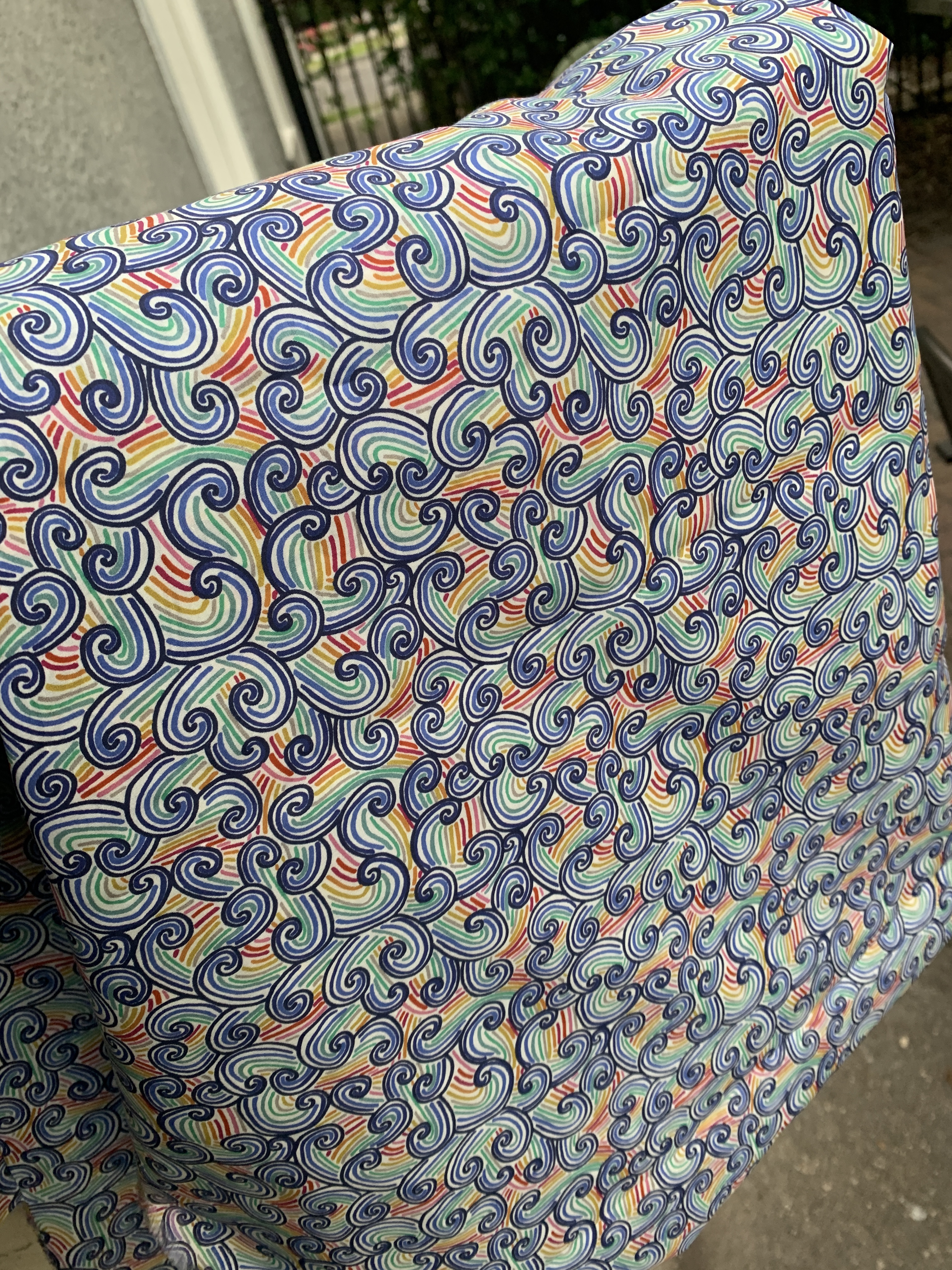 I’ve been enjoying my Peloton too. It is so nice to have the outlet for stress relief. Yesterday I hopped on it three different times when I was stressed out of my mind. Just a ten minute ride really helps! In five and a half weeks, I’ve done 80 rides! (I mean, yes, some of those are 5 minute warm ups or cool downs, but plenty are 45 minutes or longer!)

I’ve been watching all of the Marvel movies in the order suggested here, because Kiki was doing it, and it sounded fun. I realized I’d missed a couple of the movies over the years, so it was nice to get caught up. (And now the beginning of Avengers: Infinity War makes sense!) Sometimes I have it on my phone while I sew and kind of half-watch (I mean, I don’t want to sew over my finger or anything) or sometimes I have it on while I work on a puzzle. The boys watched Spiderman: Homecoming with me the other night, but otherwise it’s just me.

Speaking of the boys watching things, they were so happy last weekend to have a soccer game to watch on TV again!

Ziggy likes to watch sports too. 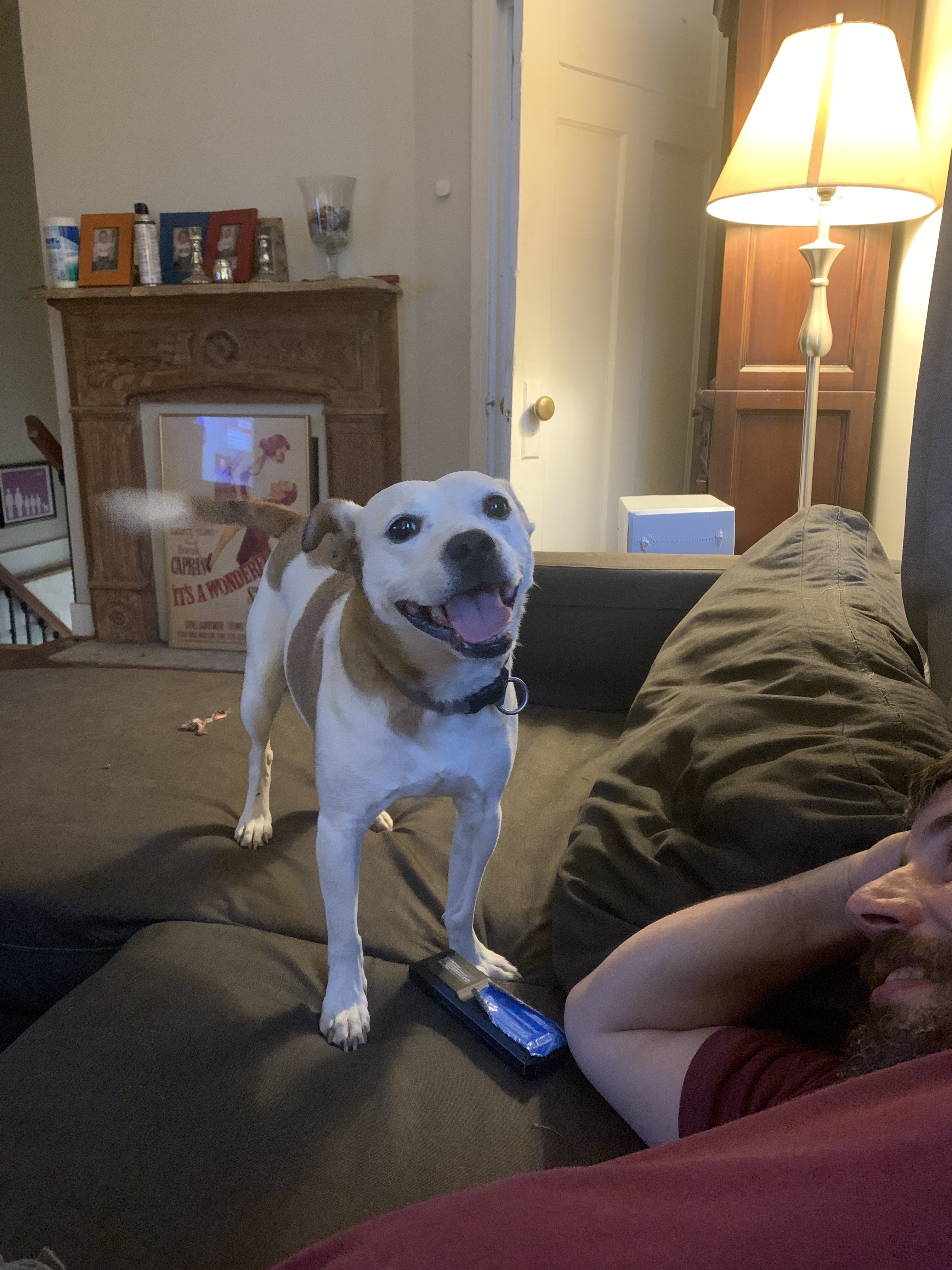 Tomorrow is the boys’ last day of sixth grade! Last night they put on their school uniforms because they missed wearing them. So hopefully they won’t mind putting them back on for a last day of school pic!

So handsome! Got it here. 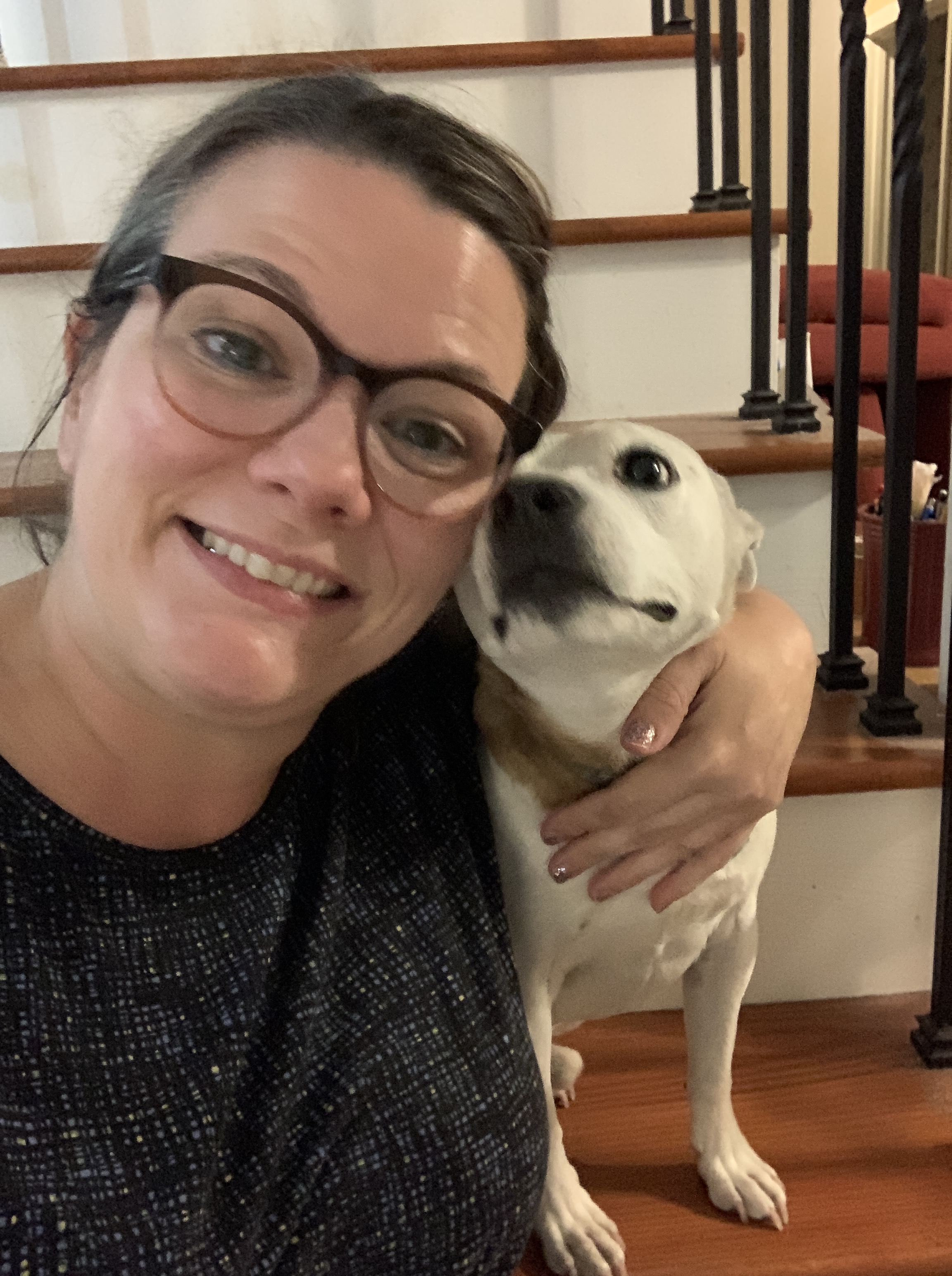 It’s hard to get a selfie with a dog.

Ziggy is a little weirded out by my fake butterfly. 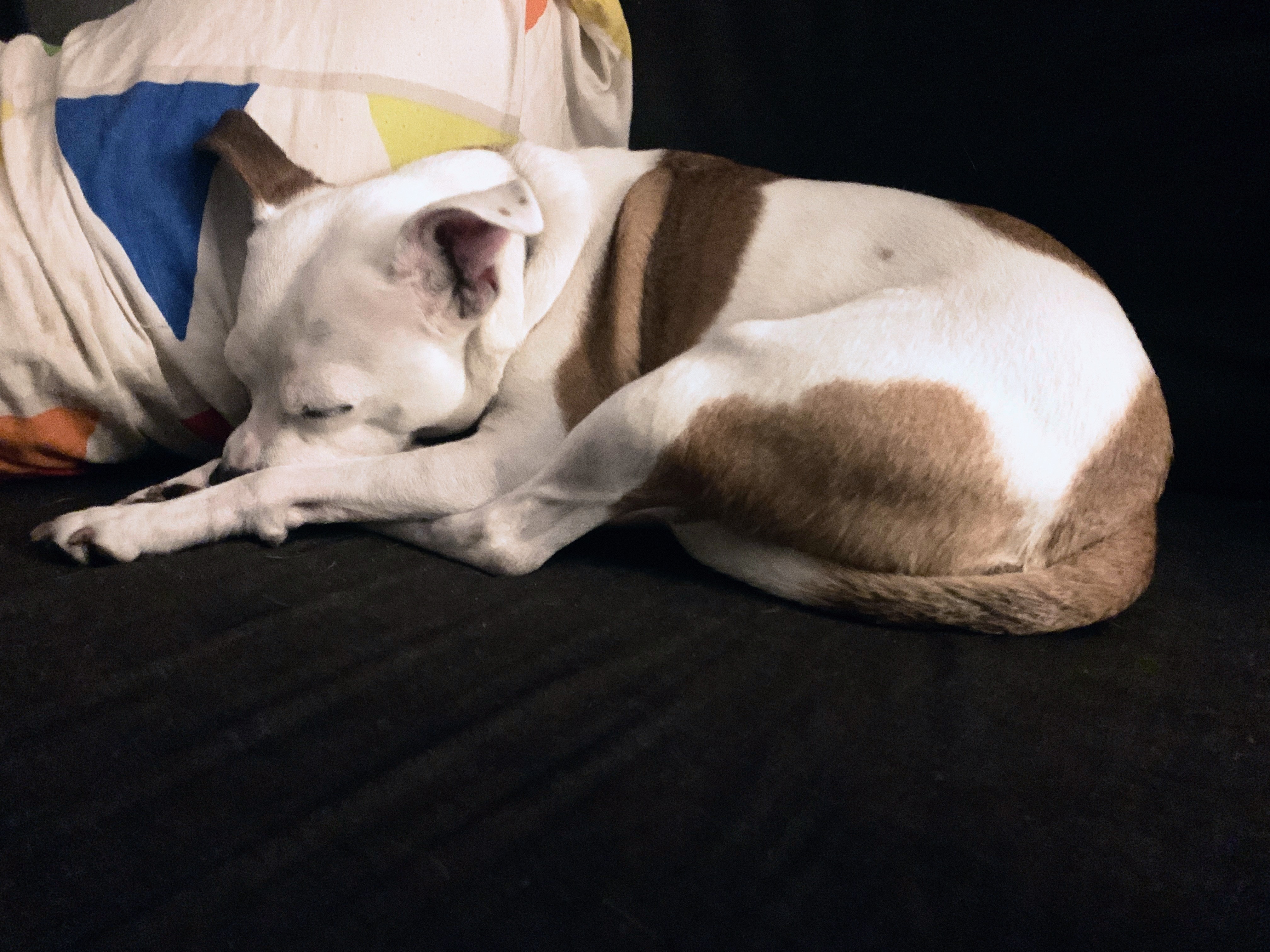 You almost got a photo of my new waffle iron plates which earned Cuisinart a scathing review on Amazon, but instead you get the Zigster, being ridiculously cute.

The boys had the day off, and it was a lovely cold, crisp day, so we took the Zigster for a walk. We stopped at the neighborhood market because I needed butter. All they had was $5 Amish butter (that’s for two sticks!) so yeah basically we are fancy is what I’m saying.

Happy 15th (!) to my sweet, smart, talented, beautiful niece and goddaughter Emily. I love you!
17?!? I can’t stand it. My sweet baby Eleanor who made me an aunt. I love you and miss you!
Made another Alton blouse. And yes, I like taking pics of clothes in the bathroom. 🛁 Fabric, again, from @blackbirdfabrics. #cashmerettepatterns #altonblouse #blackbirdfabrics #bfprints #memadewardrobe #curvysewing #sewing
Happy birthday, Father.