I haven’t done a serious 5K in a while. About a year ago, I did one to benefit a friend’s cousin, but I wasn’t running much then, so I don’t even think I kept track of my time. And before that, I don’t think I’d done one since before the boys were born. Maybe even longer ago than that. As much as I love 5Ks, they’re kind of pricey when you’re on a budget, and when the boys were infants, I couldn’t really leave them. So I was happy when there was a Living Social deal for this race, which made it way more affordable.

I had hoped that it would be cool, since it’s, hello, November, but it was in the high 60s when I left the house and only getting warmer. At least there were some clouds in the sky to keep the sun at bay. But not enough.

When I got to City Park, I found the verrrrry long line to pick up my number (there were 400 Living Social entrants and only one person getting them registered. Ugh.) and eventually got it. They had to delay the start of the race by 20 minutes to account for all of the people in line.

I ran into my friend Heather from our neighborhood, and we lined up at the start together, but agreed to do our own thing and meet up at the finish. When we started, she was a few paces ahead of me, and I thought, if I could keep up with her the whole time, I’d be doing well. (She has not only the benefit of youth, but let’s just say a more running-friendly build than I do.) There were a lot of people walking in front of us, so no doubt I lost some time weaving in and out, but it wasn’t too bad.

The first mile was fine, and I finished it in 10:23. Ooh, that’s pretty fast! There was one underpass (read: hill) and I figured that wouldn’t be the only one. Mile two was better – completely flat – and I finished it in 10:09. Oooh, negative splits! I was getting pretty hot at this point, but kept going, even through another underpass. When I hit mile three (10:05!) I really thought I might pass out, but I was so close to the end – surely I could get a PR! I couldn’t remember exactly what that PR was – it was very old – but I was thinking it was a bit over 32:30. So when I crossed the finish line at 32:30 on the nose (I crossed the start line at 2:30 and the finish line at 35:00 exactly) I thought I may have shaved a few seconds off my PR. That last tenth of a mile was killer. It was around a track (which was kinda neat – I’ve never run on a track before) but I was giving it everything I had. I mean, I was barely getting enough oxygen in, and I was hot, hot, hot. But as you can see, I was going at practically the speed of sound. Srsly. Look at that…that spike at the end is 7:14 pace! Ha ha!

Heather was a few seconds behind me, and as agreed, we met up at the Nutella truck. Yes, Nutella truck. Can you imagine? Heavenly. They were giving out slices of french bread with Nutella slathered on. Heavenly. 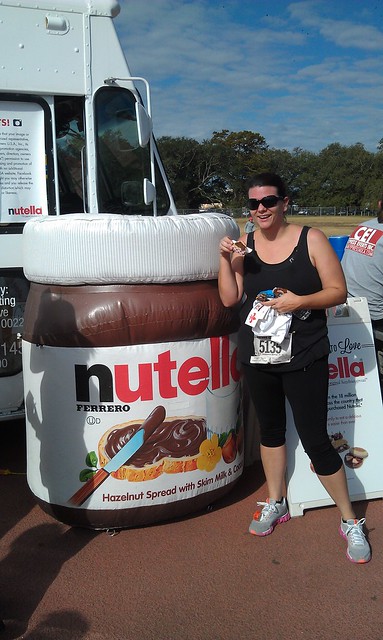 When I got back to my car, I looked up my race report from the race I got my PR at back in January 2005 and was saddened to see that my PR was actually 32:26, so I missed it by four stinkin’ seconds. Oh well. I honestly don’t think I could have shaved off four seconds at the end, but that’s okay. This race was undoubtedly hotter and probably more crowded. So I’ll call it even. 🙂

All in all, a good race and hopefully I’ll be able to do more 5Ks soon. I do have another half next month, but after that…5Ks only!

I did it! I made the perfect coat. It's a simplified version of the #chiltontrenchcoat from #cashmerettepatterns using wool melton from @blackbirdfabrics and lining from @joann_stores. I decided against buttons and buttonholes and went with toggles instead. More on the blog!
More pics from a weekend with Uncle Evan and Eleanor. #family
The Bench #7, 2022. (1-6 on the blog.)
We went to Italy for dinner, I think. #pizza #yum
Join 2,620 other followers