The Europe post really took it out of me for blogging. Whew. But now I can talk about other stuff.

Like how I went to the gym the day after I got home (so proud of that) and afterwards, stepped off a curb wrong, sprained my foot and shattered my phone screen. Winning!

At least it was just a sprain, but it won me a couple of weeks in a boot that the boys are insanely jealous of. (They call it my robot foot.)

Actually, I haven’t been wearing it much. My foot feels a lot better now. Probably didn’t even need to go to the orthopedist. Oh well. At least now I have a cool robot foot costume.

I also went to a fun costume party for my friends’ birthdays. It was superhero themed. I was Super Ute.

And from the front.

The fourth was Monday (in case you missed it) and we went to our friend’s house and then watched fireworks. As one does on the fourth of July.

I’ve also been spending a lot of time working on WordCamp NOLA, which is coming up really soon. Ack! If you’re interested, buy a ticket or sponsor us! Please, so I can sleep at night.

Last night I took the boys to meet a coworker for dinner at Pizza Delicious (and yes, it lived up to its name) and then we finally got to check out Crescent Park. There’s this insane bridge you have to cross to get over the railroad tracks. The boys were quite taken with the park when we got to the other side. 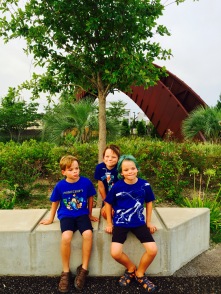 Well, I suppose that’s enough for now. Taking the boys to see The BFG this afternoon after camp (Oliver finally finished reading it) so I’d better get some more work done.

Got myself a pretty vintage beaded purse at @merchanthouse.co today. For all my black tie events. 🤔 #treatyoself
Boosted! 🦠💉
The traditional “walk to Congregation during fall break” pic.
I made this whole outfit in the past month or two. I guess I’m getting out of my rut? The shorts are #caldershorts (my “winter shorts”), the cardigan is the #blackwoodcardigan that I posted a few weeks back, and the shirt is a #seamworkakita in a fantastic #schittscreek themed fabric from @spoonflower. (Came in too late for our trip last weekend.) And it all goes together pretty well, just by accident! #sewing #memadewardrobe #ewdavid #cashmerettepatterns #helenscloset