I have to post about this because Friday night was the most fun night ever!

Stephanie and I went to a live show at the Orpheum of our favorite podcast, My Favorite Murder. If you like true crime (I mean, I guess I must) and cursing and laughing, you should definitely listen. If you don’t like all three of those things, maybe stick to This American Life.

Back in October, tickets went on sale. I was in London at the time and just finishing up a meeting when the time came for sales to start. I tried and tried and tried and just could not get tickets. Meanwhile, back in the States, Stephanie was also trying. Thank goodness she was able to get a pair for us. Not just any pair – second row, VIP!

VIP meant we’d get a few goodies but best of all, we’d get to meet the hosts, Karen and Georgia after the show! Eeek! For months, Steph and I planned what we were going to wear (I’d make shirts for sure, but what would they say?!?) and what we’d give them. (People often give them a little gift at the meet and greet.)

The show’s motto is “Stay Sexy and Don’t Get Murdered” (mostly female audience for this show) or SSDGM for short. Oh, and people who listen are called Murderinos. So that should explain our shirts and the Mardi Gras beads I customized to give them.

So okay. On to Friday night. I met Stephanie across the river, and we grabbed a bite, then headed to the theater. We got a bag o’ goodies (VIP stuff) and then got our seats which were sooooo close to the stage. I didn’t realize the Orpheum was so small (it goes up high, but the room itself is small.) 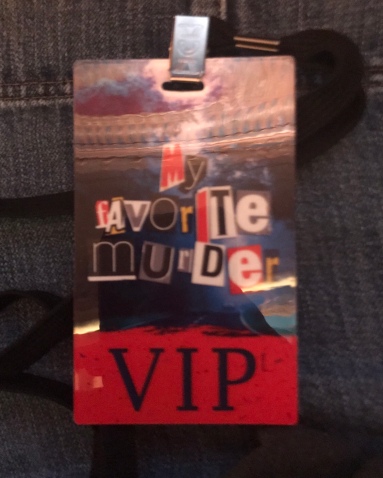 Before too long, the show started! Karen and Georgia came on stage and did the show, and it was so cool to see them talking. I mean, you listen for so long but realize you have no idea what kinds of faces they make while recording. It was hilarious, as usual, though there was an obnoxious (probably drunk) woman somewhere behind me, guffawing loudly and yelling out at every opportunity. Ugh.

Someone gave them a Muses shoe, which they were adorably clueless about, and a couple of women got on stage and did a little tap dancing. Oh, and I caught a strand of beads that Karen threw into the audience. Woot!

At the end, someone from the audience gets on stage to share their “hometown murder” and I was ALL READY to do it, but alas, I wasn’t picked. It’s fine.

After the show, the VIPs were led down to the basement (George would have loved it) to wait for the meet and greet. I had no idea what to expect. Would we get two seconds to get a picture and say a few words and give them their gifts?

Well, finally it was our turn. I gave my camera to Georgia’s husband and we walked up on the little platform. And Karen and Georgia walked up to me and Steph and HUGGED us. And we chatted. And they were so warm and delightful and seemed to be in no rush whatsoever to get rid of us, even though of course in a way they were. I mean, the line was long.

They put on the beads I made (I was very excited when I realized “SSDGM” were all letters in “MARDI GRAS”) and I gave them some knife earrings that Bea wanted us to pass along to them. I told Karen I had a hometown murder all ready, so she said to email it in and make sure I put “VIP” in the subject line so fingers crossed it’ll be read in an upcoming episode! They were just delightful and Steph and I left giggling and giddy.

It was a fantastic night and I hope they come back to New Orleans!