I made another shirt!

Not without many bumps in the road, either. I’d found the Akita pattern and gazed longingly at it for a while before finally subscribing to Seamwork (affiliate link) so I could get it for free (well you know, after paying to subscribe.)

I had some inexpensive fabric I’d bought so I decided I’d use that to make it and if it didn’t work out, it wouldn’t be the end of the world. Good thing, because it didn’t work out. Just too small, generally. Too bad, though, because it took forever to make. Partially because I’m new at this, and partially because all of the edges of the fabric were bias bound (or whatever the proper term is, but it involved sewing on a lot of bias tape.)

So after about four hours of sewing (okay not literally forever) it was done, I put it on, and…sad trombone. (Also because of the pattern, the cherries on the back were upside down, but I knew this going in.) 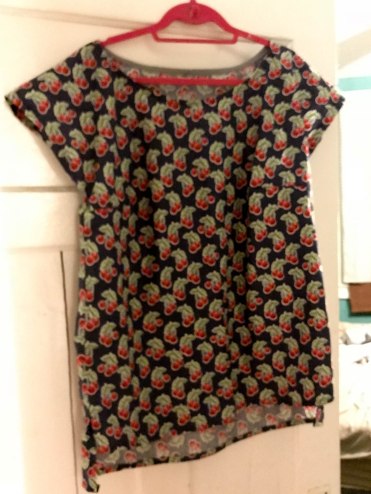 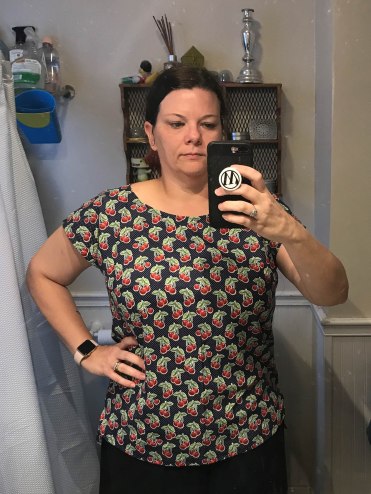 Doesn’t look too small in the pic but trust me.

Okay, well, at least I knew sorta how to fix it for the next time. Make it bigger!

[I had all kinds of internal debates about if I should make it bigger everywhere or just in the hip area, but then I decided I’m not good enough to “grade” the pattern (which means to make it one size in some parts and another size in other parts, which is trickier than it sounds) so I just made it bigger everywhere.]

This time, I used a fabric I liked more, and it turned out much better! Sure, it’s a little boxy, but I think once it’s washed a few times, it’ll soften up a bit. Too bad I’m not the type to tuck things in. But now I know how to use bias tape!

Happy birthday from our #kreweofmoiras to the original! #catherineohara #schittscreek #moirarose #moirarosefashion #mardigras2021 #yardigras #algierspoint #rosebudmotel
Blog traffic is weird. Wonder if this post was shared somewhere and soon there will be an influx of Pope Moiras in the world. 🤔 #moirarose #costume #sewing #blogging #schittscreek
Shhhh don’t wake the baby. (He’s snoring. 💤) #dogsofinstagram #ziggymcziggerson
Vaccine or placebo?!? Who knows?!? (They have a 2:3 chance of getting the vaccine so 🤞) #science #vaccine #guineapigs 🦠💉🧪 #triplets #identicaltriplets