I will put the exciting news at the bottom because, well, it’s kind of gross, to be honest, and I don’t want to make everyone read it, unless they want to. (It’s potty training-related, if that isn’t obvious.)

First, let me say, I love this age. Yes, it has its challenges, but the boys are so funny and so cute and just say the best things. And they’re getting a little more self-sufficient and they’re learning so much. It’s just fun.

I had to go to Target after work yesterday to pick up a prescription, and while I could have gone before getting the boys from daycare, where’s the fun in that? I like a little challenge in my day. So I brought them with me. Without the wagon or anything (which isn’t unusual anymore. We haven’t been using the wagon much at all lately, except for walks in the neighborhood.)

They were good. First, we stopped at the Dollar Spot because there were Sesame Street figurines for a buck, and as it happens, I’ve been searching for some that they can use in their SS playset. Score! Then, we passed the lingerie department, and you know how that went. We were heading towards the diaper section so I could pick up some pull-ups (for daycare).

They said hi to Diego. 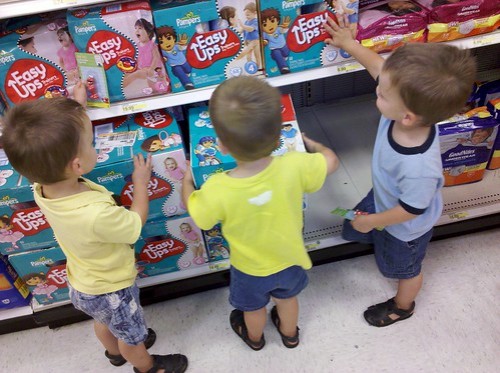 Then hi to the babies on the swing box.

We needed to cross the store and the toy section was between us and the other side. Uh oh. So I chased them down a center aisle, and we successfully passed the toys without the boys seeing them. Whew! 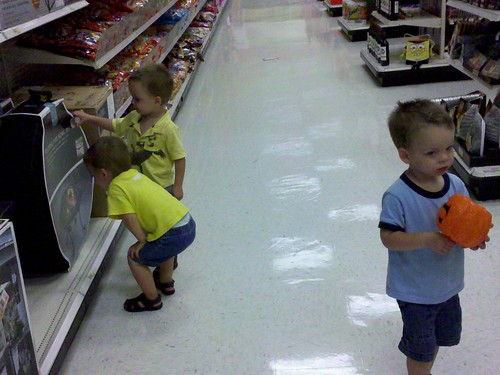 And then, my biggest mistake. The coloring book aisle. It took us ten minutes and $6 to get out of there. 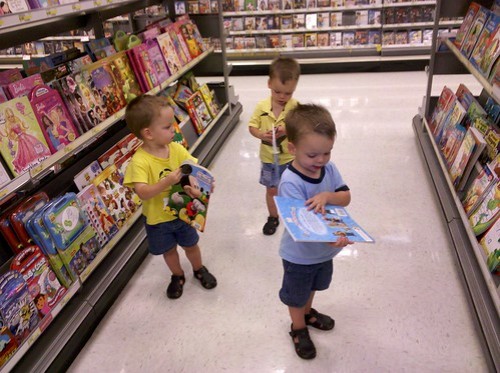 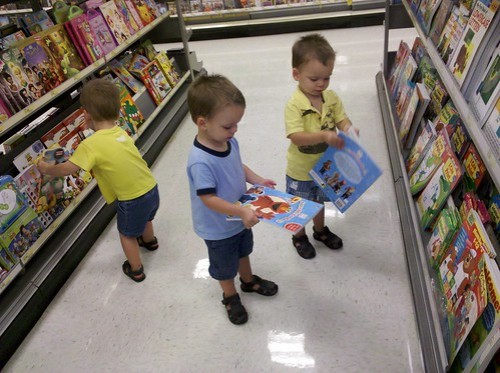 And then there were fights over a bottle of water, and of course a million “are those triplets??!?!?”* comments but all in all, a good trip.

*I act like I hate these comments, but you know I really love them.

Okay, so here’s the exciting news. It’s kind of a funny story.

So this morning, when I went to get the boys out of bed, Linus was saying “I got poo-poo.” I thought he meant he had a poopy diaper, so I said, “okay, I’ll change it.” But it wasn’t poopy. So I asked him if he wanted to sit on the potty. And he said yes. And so he sat on the potty and asked me to fetch his dinosaur book. No, not that one, the yellow one. When he asked for reading material, I knew he was serious. And voila, a few minutes later, he called for me. Yes! He pooped on the potty!

And yet, none of these kids have peed on the potty at home. So weird.

7 thoughts on “A trip to Target (and exciting news!)”