So we all know what a disaster our first attempt at potty training was. I don’t even like to think of that November weekend. It makes me want to curl up in the fetal position and rock in the corner, listening to The Smiths.

So when daycare asked me to just bring the boys to school in underpants, I was understandably a bit nervous. We agreed that we’d start on Monday. I told the boys, and they seemed excited about it.

So Monday rolls around, and Oliver and Linus happily put on Thomas underpants. Miles refused. Whatever, I was fine with that. Either his teacher at daycare could try to get him in them, or we’d let him PT later.

Before we left for school, Oliver had an accident. No biggie. We get to school, and when I go to pick them up, I only had five pairs of pants to clean. Not bad for two kids! (As it turns out, Miles refused to wear them altogether.)

But they wouldn’t use the potty at home. There was another accident, but then we did bathtime, and I put diapers on them (with some relief, to be honest.)

Tuesday rolls around. Linus had an accident. Miles is still refusing to wear them. I bring them to school, and I come home with only three pairs of soiled pants. Woot!

After we get home, I ask Linus and Oliver to sit on their potties. They do, and nothing happens. Finally Oliver indicates that he wants to stand and use the toilet.

What? They were using the toilet standing up at daycare? This is news to me. I just assumed they were sitting. I thought that’s how everyone taught boys to pee. Guess not!

So (yes, I know I start too many paragraphs with “so”. So what?) I stand Oliver up at the toilet, and whaddya know, he pees! And then Linus does! I reward them with a piece of candy (look, I know my kids, and sugar works. Whatever.) and by the time we’re getting ready for bed, there have been NO accidents!

And then this morning…Linus and Oliver both peed in (okay, and around – we need to work on aim) the toilet.

Woot! I guess they just weren’t ready before! Or, they wanted to stand up, and just didn’t tell me.

Sorry I don’t have any pictures to illustrate this post. Instead, I’ll post this one of the four of us at the zoo on Saturday. How’s that?

oh, and this picture of Miles on the “pink duck”

oh, and this one, also of Miles. 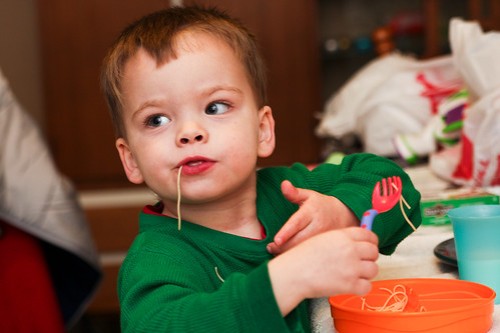 Well, I can’t leave Ollie out!

The end of an era. Au revoir, LFNO! 😭🇫🇷🎓🚌 #tripletsofinstagram
Happy 15th (!) to my sweet, smart, talented, beautiful niece and goddaughter Emily. I love you!
17?!? I can’t stand it. My sweet baby Eleanor who made me an aunt. I love you and miss you!
Made another Alton blouse. And yes, I like taking pics of clothes in the bathroom. 🛁 Fabric, again, from @blackbirdfabrics. #cashmerettepatterns #altonblouse #blackbirdfabrics #bfprints #memadewardrobe #curvysewing #sewing