My last post left off on Wednesday morning. My vision was still kind of hazy, but I could definitely see pretty well. After the boys went off to school, my mom and Larry drove me to the eye doctor for a follow up.

My vision was tested and I got 20/20 in one eye and 20/25 in the other. It seemed like it was the haziness from the light of the projected eye chart that was making the letters blurry, and I was assured that would improve over time.

Not much time, as it turned out. My eye doctor came in a few minutes later and removed the contacts he’d put in my eyes at the end of the procedure yesterday. Who knew? (Well, I suspected, but I wasn’t sure.) Sure enough, my vision immediately because clearer. I wasn’t tested again, but I’m pretty certain I’d be able to read the 20/20 line with both eyes now.

The doctor went over the schedule for my myriad medications again. I may have alluded to my weird eye issues before, so I may as well come clean now. It’s nothing to be ashamed of, it’s just…kind of weird and gross. So in addition to using antibiotic eye drops and steroid eye drops, I also have to take four antiviral pills a day for the next few months. That’s because I have ocular herpes. Whatever you do, don’t do a Google image search for that. Trust me.

When I was in high school, just a few weeks before the Sweetheart Dance (I actually had a date, people) I noticed a pimple on the bridge of my nose. It wouldn’t go away. It got bigger and grosser. (Man, this post is turning out to be worse than yesterday’s.) I finally earned a trip to the doctor (this was when I was at boarding school, so it wasn’t as easy as it sounds) where I was informed it was not a pimple, but a cold sore. And there were some small fever blisters on the edge of my eyelid as well.

At the time I wore gas permeable lenses, and the doctor informed me I’d have to switch to glasses immediately. I didn’t care that wearing rigid lenses might let herpes into my eyeball and cause blindness. I just didn’t want to wear glasses to a DANCE!

Regardless, I followed doctor’s orders and wore my glasses to the dance. Everything healed, and except for the scars I still have on the bridge of my nose, I pretty much forgot about this incident.

Seventeen years later, in 2009, I was preparing to go to Toronto for work, but I had this irritation on my eye. I assumed I’d scratched my eye putting in my contacts or something, so I went to an ophthalmologist who looked at my eye with that searingly bright light and immediately recognized my irritation as A COLD SORE. ON MY EYEBALL.

So anyway, whatever, that healed, life goes on, I didn’t go blind, etc. But when I was researching LASIK, I learned that it can be a risk factor, since the trauma of the laser slicing into your eyeball can activate the virus. After a lot of research and speaking to my doctor I made the decision to go ahead.

Wow, that was a lot just to explain by I’m taking those antivirals, huh? I didn’t tell this story just to gross everyone out (that was just a bonus) but in case anyone else who has eyeball herpes wants to get LASIK, maybe this will help them make a decision.

You know what’s the worst part? I lied. I didn’t wear my glasses to the dance. 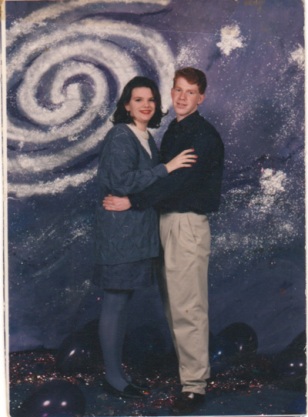 I mean sure why wouldn’t I need a white puffy vest? But I saw the #murcotvest @kiwisewswien made and remembered I had a very similar nani iro fabric that a friend gave me so I thought “why not?” I put in welt pockets for the first time and NEVER AGAIN (maybe) but it all worked out in the end as long as you don’t look too closely. Lining is a gingham I bought from @blackbirdfabrics eons ago because I just loved it. And it wouldn’t be me without a filthy tag. @cashmerette #sewing #memadewardrobe #curvysewing #pyjammysews
Pink hydrangeas. #flowertattoo by @mecha_mecca at @hellorhighwaternola
Kind of a mess, but hopefully tastes good! #fingerscrossed #kingcake
To cap off the JV soccer season, there was a freshman vs sophomore game. Miles was the freshman coach. And they won, 2-1!
Join 2,592 other subscribers