One year ago I walked into Joann’s, picked out a pattern and some whale fabric and painstakingly sewed a skirt.

Backing up a little…a few days earlier, I posted on Facebook somewhat reluctantly looking for recommendations for an inexpensive sewing machine. I was reluctant because I knew my mom was going to bring up the old machine she had given me years ago. That machine scared me. It was old! It needed oil and stuff. I wanted something shiny and new that would have videos on YouTube and lots on online resources.

But I’m also impatient and cheap so I figured I’d just pull out the machine and give it one more try, and this time with the manual, before ordering something online.

Okay, this story is getting too long and I have a feeling I told it all before. So let me just cut to the chase. On February 18, 2018, I sewed my first item of clothing, and an obsession began. It didn’t turn out all that great. I didn’t know about finishing seams, so after I washed it, they all started fraying. Oops.

I made shirts, more skirts, pajama pants for the boys. I was pretty fearless. I discovered the world of indie sewing patterns and bought a serger off Facebook Marketplace so my seams stopped unraveling. In May, I participated in Me Made May and wore an item of clothing I sewed every day for the whole month. And I kind of never stopped. Even now I try to wear something every day that I sewed. Sometimes I forget, but it’s not a big deal. My wardrobe is probably 80% handmade by now, so it’s almost inevitable.

Back to that old sewing machine – I love it. I now realize that any sewing machine I could have afforded would have been a cheap plastic wobbly thing compared to this tank. Sure, it has its issues – I have to special order bobbins, and it doesn’t do fancy things like automatic buttonholes and it gets cranky when the bobbin thread runs low, but I’ve learned to deal with its quirks.

So what are my favorite things I’ve sewn so far? 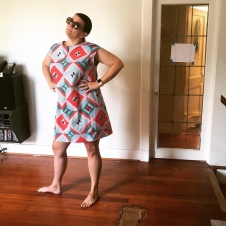 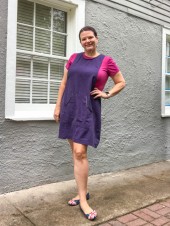 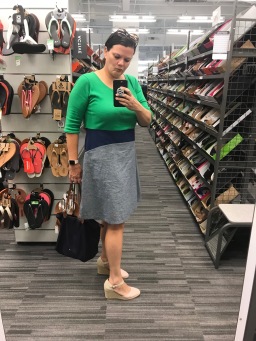 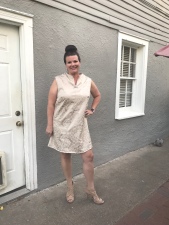 60s dress out of a curtain

But those are just the things I’ve made for myself. I’ve also enjoyed sewing for other people.

Rompers for my cousin’s sons 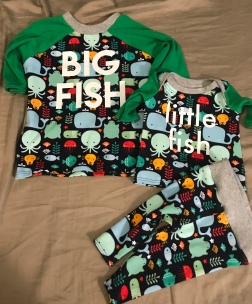 Outfits for my friend’s sons

Unicorns for my friend’s daughter

PJ pants for the boys! 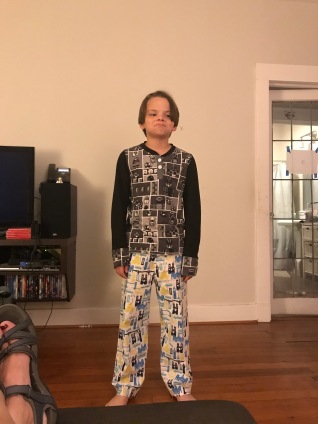 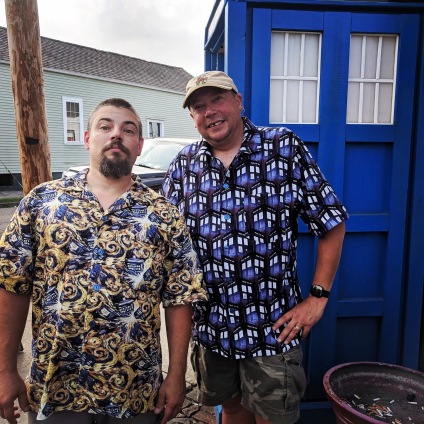 Doctor Who shirts for George and Neil

Unicorns and rainbows for a friend’s baby

And I’ve had fun sewing bags and scarves and scrunchies and pillowcases too. Why not?

So what’s next? I have bins and bins of fabric and probably a dozen patterns that are waiting to be used. I’m most excited about the Cashmerette Ellis denim miniskirt – I even have rivets! And a bathing suit pattern that I’ve been sitting on, but definitely want to make it for this summer. And a pretty border pattern fabric that’s probably destined for a skirt, but I kind of want to make something more unexpected with it, but I’m just not sure yet. And that pink art deco sequin fabric that I bought almost a year ago but I’m terrified to mess up, oh and there’s the silk brocade that I bought in Singapore…and on and on.

So yeah, I think I have plenty to keep me busy for another year of sewing at least!

All in all, I’m pretty proud of how far I’ve come in a year. I’m not scared of knits or zippers. I have come to embrace my shape instead of being ashamed of it. Instead of dreading trying to find a dress or a skirt, I can just make one! It’s incredibly freeing. I was in Real Simple! I helped bring attention to an amazing online community! It’s been so great, and I can’t wait to see how much I can do in the upcoming year. (Let’s see if I can tackle that bathing suit…)

One thought on “One year sewiversary!”

Happy 15th (!) to my sweet, smart, talented, beautiful niece and goddaughter Emily. I love you!
17?!? I can’t stand it. My sweet baby Eleanor who made me an aunt. I love you and miss you!
Made another Alton blouse. And yes, I like taking pics of clothes in the bathroom. 🛁 Fabric, again, from @blackbirdfabrics. #cashmerettepatterns #altonblouse #blackbirdfabrics #bfprints #memadewardrobe #curvysewing #sewing
Happy birthday, Father.