Okay, so perhaps the boys weren’t quite cut out to be models…so maybe movie stardom is their fate instead?

Yesterday was their first audition, for the film adaptation of On the Road. They’d be playing a little boy named Ray, son of the character Marylou, played by everyone’s favorite vampire-lover, Kristen Stewart.

So in spite of the day’s rain, we got to the casting office with a little time to spare. Tee, George and I read them their dinosaur books while other sets of twins hung out with their parents. 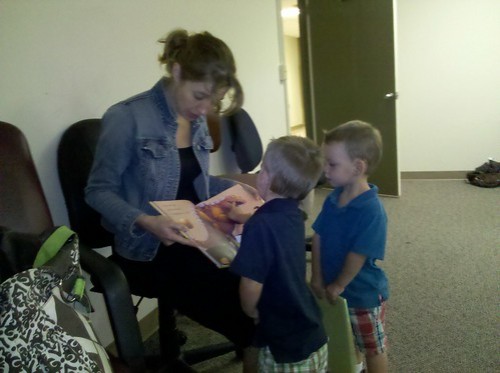 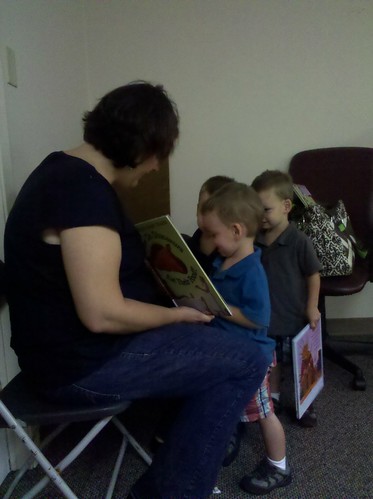 There was a set that looked about a year old, and a set that looked maybe the same age as the boys, and another set somewhere in between. It’s possible that I’m a tiny bit biased, but I think our boys were the cutest. (But I suppose the other moms were thinking the same about their kids. I hope!) Also, we were the only ones who didn’t dress their kids exactly alike. The boys were wearing the same outfits, but in different colors. I wanted the casting people to be able to tell them apart, but then again, maybe they don’t want to be able to? Hmm. But I think I made the right decision, because they asked me which boy was which and I was able to tell them by color. What would the other parents have told them? “Oh, Bobby is the one with the slightly fuller cheeks”?

They were being a bit clingy, which worried me, but to my delight, when we were called into the audition room, they went willingly. George, Tee, and I had to wait outside of the actual filming room while the boys auditioned.

One of the casting people explained that in the scene they were casting, the little boy would be asleep on his Daddy’s chest, and then Mommy would pick him up and transfer him to his bed. Still sleeping. Still pretending to be asleep. Call me crazy, but they wanted one year olds to do this? The ad I responded to was looking for one year old twins, but I cannot imagine one year olds knowing how to pretend to be asleep. So I’m thinking their age will be an advantage here.

I know they were taking pictures of the boys, and getting them on film. I could hear them saying things like “hug your brother” and then a lot of “good job!”s, which is promising. I was so happy that no one cried or whined or anything. I was truly shocked that they willingly went into the room with the cameras, without me and George. Clearly, they are naturals. Heh.

After about ten minutes, the boys came out, and then one at a time, they went back into the room. I guess to see how they were on their own. Again, no tears or anything. Oliver did bust in while Linus was in the room, though. There might be a touch of codependency going on, but I thought it was kind of sweet.

And that was it, really. They said they’d know something by the end of the week, so now we just cross our fingers and hope for the best!

(And I do realize that if they don’t get it, it’s no big deal. It would just be fun if they did.)

9 thoughts on “The audition”