For years I’ve wanted to do a Thanksgiving Day race, but we’re usually traveling or having company or something, (or I was extremely pregnant with triplets) so I’ve never been able to. But this year, I had no excuses, so I signed up.

The race here is five miles around City Park, which was not a point in its favor. A 5k is more what I had in mind, but you take what you can get. I figured I’d just run/walk it. Whatever it takes to burn off the calories I’d be eating later that day.

The weather was ideal for a race – in the high 40s/low 50s and sunny. (Okay, I mean, for a run, I could have done without the sun, but it was a gorgeous day, so I won’t complain.) I didn’t know anyone else doing it, so I just kind of stretched and hung out while waiting for the race to start.

Finally, it was time to line up. I took a single picture here. 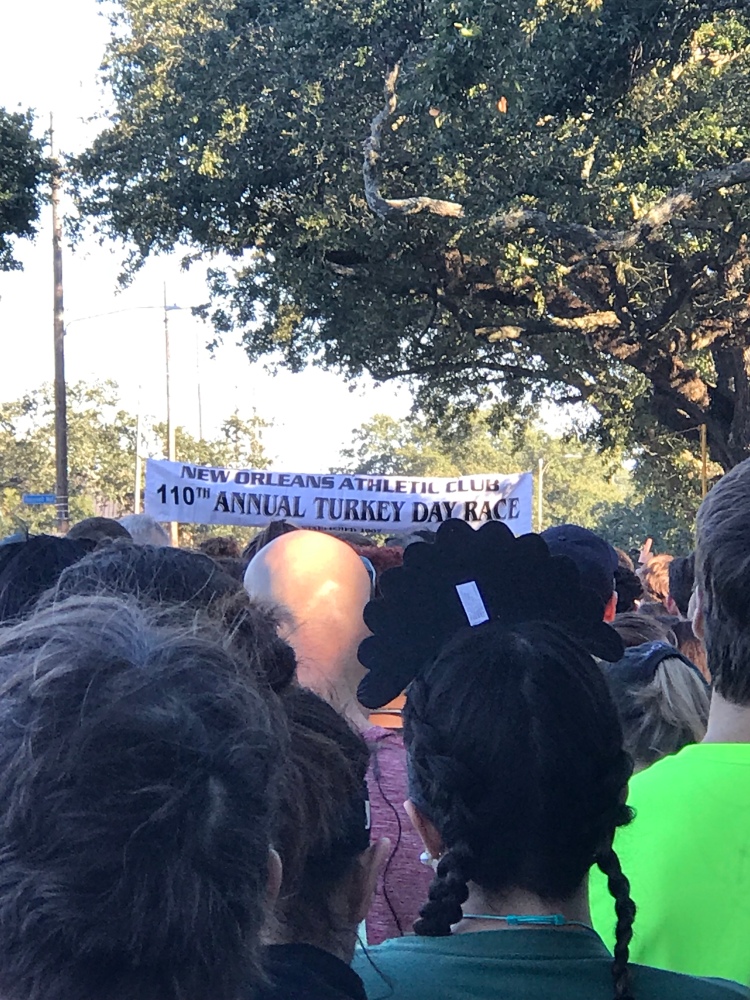 And…we were off! I figured I’d just start out running and would see how I felt and run/walk when I got too tired. Whatever.

The last time I did a five mile race was in March 2015, when I ran the entire Shamrockin’ Run, which is technically 8K, or 4.97 miles. I developed Achilles tendinitis after that and never ran long distances again. And then in April 2016 I joined Orangetheory and have been focusing more on strength training than running any distances. Orangetheory is a high-intensity interval workout that lasts an hour, and it’s not like I’ve run more than 12 minutes straight since joining OTF.

But I guess there’s something to this interval training malarkey, because I RAN THE WHOLE THING WITHOUT STOPPING.

It wasn’t a goal of mine because I never thought I’d be able to do it. I just started running at my usual 12 minute/mile pace (YES THAT IS RUNNING DON’T CALL IT JOGGING) and after the first mile, felt fine. After the second mile, still good. As I approached the halfway point, it started to get a little more difficult, but nothing major. I knew I had to get over the mental hurdle of halfway, and then I’d be okay.

It didn’t get easier, not by any means, but once I’d gone that far, I wasn’t going to stop now! Geez. So I just kept going. Oh, did I mention there were hills? I mean, okay, only someone in New Orleans would call them hills, but there were a few slight inclines here and there and I didn’t even walk through those.

I set my Runkeeper app to announce the time every minute, which helped me keep pace. And the GPS seemed fine most of the way through the race. I’d cross the mile marker just as the app would announce that I’d crossed it, but somehow it got a bit wonky around mile 4. So I wasn’t really sure if I’d make my secondary goal of under an hour. The app announced I’d run 5 miles just as I rounded the corner into the stadium where the finish line was, but I stopped the timer just after I crossed, and saw this: 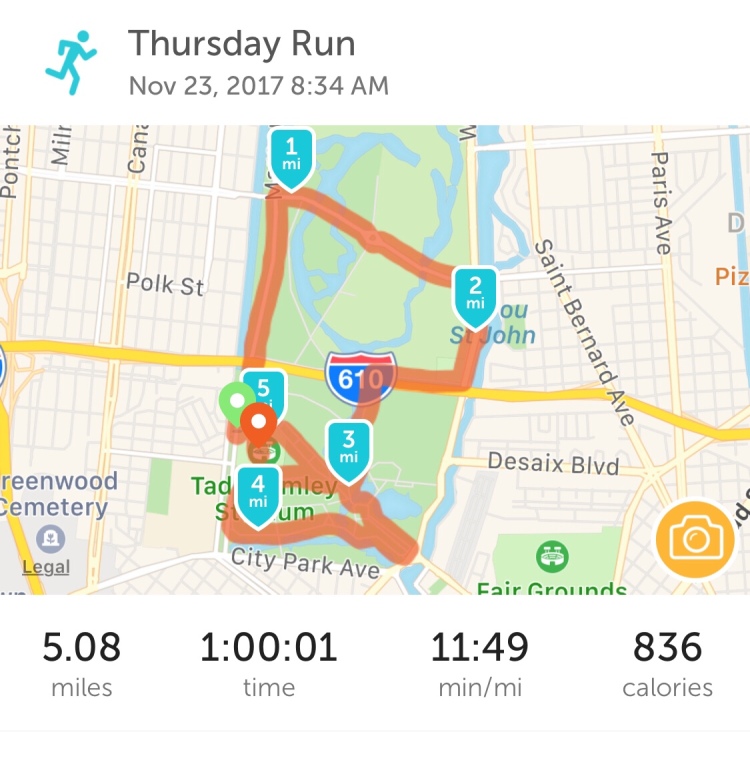 An hour an one second? You have got to be kidding me.

Fortunately, the chip time was more in my favor:

Woo hoo! 12 seconds under an hour! Not only did I break an hour, I beat the Shamrockin Run time and it was three-hundredths of a mile longer! Woo!

So yeah, I spent yesterday bragging to everyone that I ran the whole five miles without stopping and even wore my race t-shirt to Thanksgiving dinner at our friend’s house. I’m shameless.

I took the boys to get their flu shots today. The pharmacist also has triplets. All boys, the middle one named Oliver. 😀
The post-salon selfie. #embracingthegrey
I did it! I made the perfect coat. It's a simplified version of the #chiltontrenchcoat from #cashmerettepatterns using wool melton from @blackbirdfabrics and lining from @joann_stores. I decided against buttons and buttonholes and went with toggles instead. More on the blog!
More pics from a weekend with Uncle Evan and Eleanor. #family
Join 2,618 other followers