Well, the boys’ birthday has come and gone, and I think I’ve finally recovered from their party. But not quite enough yet to host another slumber party next year. We’ll see. I am guessing I’ll capitulate once again. Words of wisdom: Hosting slumber parties is like childbirth.

We had five boys come over (so 8 total) and thank goodness my friends Teresa and Jenn (one of the boys’ moms) stayed to help for the evening. After eating pizza, we walked down the levee in the fog to see the bonfire. There were tons of people there, but fortunately, the side we were on wasn’t crowded. Between the fog and the crowds, I was a little nervous. But each adult was assigned a triplet and a friend or two, so it worked out fine.

We saw people doing weird things with fire (not sure what to call them) and then the bonfire was lit! It was cool. The kids enjoyed it. And it killed some time. 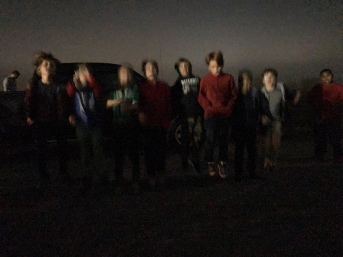 My favorite picture of the fire:

After we got back to the house, we had cake (that I made!) and sang three times, as usual. 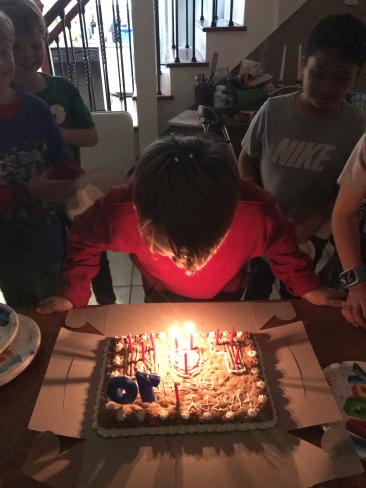 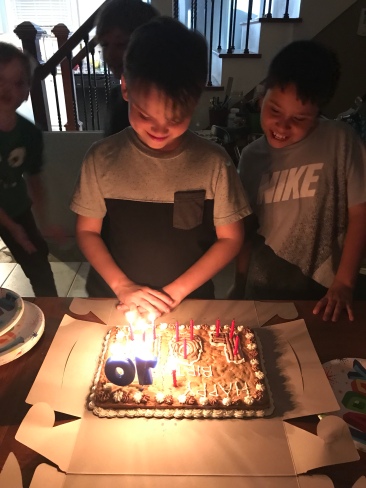 I’d also bought some canvases and pastels from Michael’s and they got to make artwork, which killed about, oh, 7 minutes. They were all too excited about playing on the Switch.

I went to sleep at around midnight but the boys didn’t. Well, two of them did. But the rest informed me they were going to stay up all night long. I rolled my eyes at this, but sure enough, when I was woken by the patter of little feet at 4am, I knew the other parents were going to hate me.

(Well, I mean, surely they expected this?) (No one was mad in the end.)

I groggily got up at around 7, and there were a few passed out boys here and there. Apparently, mine napped for about an hour in the middle of the night at various points, so I think only one kid truly stayed up all night (he conked out on the sofa in the morning.)

I went to get donuts for the kids, and the parents started coming to pick them up around 9. And then the boys napped off and on throughout the afternoon. There was a trip to Target late in the day to spend the gift cards that were burning holes in their pockets.

Monday was their actual birthday and the poor kids had to go to school. I drove them, though, so they didn’t have to suffer through a bus ride.

But first! They got to open presents from Grandee and Larry and Kiki. Those were the big gifts. Miles got the drawing tablet he coveted, the promise of a custom sweatshirt (he wanted to use the tablet to draw a design for it), and a pogo stick. (Fun!) Linus got a drone and Mario Odyssey for the Switch. Oliver got a controller for the Switch, some fancy markers, a kite, and a book on drawing. A good haul!

I spent the day trying to work, but mostly failing when I realized that I didn’t have a decent gift for Oliver. (I ran to the store to get something, whew.) George and I picked them up from school later that day, took them to guitar lessons, and then went and had a nice dinner.

Afterwards, they got to open their gifts from us (Linus got a Pokemon game and Ticket to Ride, Oliver got some drawing supplies (including a drawing mannequin that Ziggy promptly ate), Miles got fancy colored pencils and the sweatshirt I accidentally already mentioned.)

All in all, a great but exhausting birthday. They loved all their gifts, which was gratifying. Now just to figure out what to get them for Christmas…

One thought on “TEN”