I took part in a blogging workshop at work today, and now I am feeling inspired to post.

So let’s see, what have we been up to?

The boys finally got real haircuts (first time since February or so) and now I feel okay about getting one. We went to a salon owned by the mom of one of their classmates, and everyone was masked and spread out, and it felt fine.

But even more exciting is that I am getting a haircut tomorrow! Mine hasn’t been cut since last September. Of course it was supposed to be cut in March for St. Baldrick’s but that didn’t happen, and it’s been rescheduled twice but as of now it won’t happen until next year and I canNOT wait that long.

I wanted to take a picture of my hair looking as long as possible for a Facebook post so I could get feedback on how much to get cut off tomorrow, and well, that backfired. I had to blowdry it and use a hot brush and a flat iron and a curling iron just to get it looking decent enough to share, and the feedback was largely “just a trim!”

I mean, first of all, thanks for the compliments but you know I never wear my hair down, it’s too much work and it’s too hot. And it’s a nightmare to wash. And it’s so heavy it gives me tension headaches. So I will probably go shoulder length.

My hair after making it look nice:

If I just let it airdry:

So yeah. Not great. Also I had to wear sunglasses because I forgot I put mascara on yesterday for a school meet and greet and taking it off is more trouble than it’s worth. But also I’m v glam.

In other news, remember how I mentioned that I was making a sourdough starter? Well, it worked! I’m kind of intimidated by it but I used this recipe sorta* to make a loaf of bread yesterday and by golly it worked**! 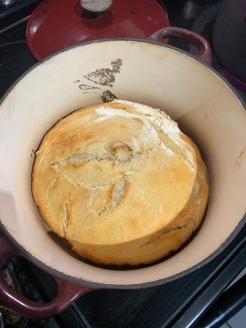 After about 20 minutes in the oven 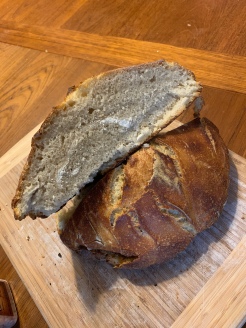 *This recipe had like forty gajillion steps and I was required to do something like every half hour for an ENTIRE day and I’m sorry, no bread is worth that, so I just like, let my mixer knead it for a while and called that a win. Also I took it out about 20 minutes sooner than the recipe said because it was about to scorch.

**I mean, it was tasty, but it was a very wet dough, maybe because I skipped the half-hourly folding or whattheheckever but it resulted in having to use a lot of flour at the shaping phase so there was a line of flour in the middle.

School starts on Thursday (at home) and I have three desks all set up for the boys. I just got a box of uniforms in the mail that I ordered when there was a sale over the summer in a fit of optimism, so I will definitely make them wear them for a picture. We joked about walking over to the bus stop at 7am but that would just make us all cry.

I took next week off work. Not for any reason except if I don’t do it now, it might be a while before I can. So I’m going to tackle a big sewing project. My motivation to sew has been pretty low lately, but maybe this will help! I’m making a Cashmerette Chilton trench in this plum herringbone flannel with a dark teal satin lining. It’ll definitely keep me busy!

Do I want to make the short or long version? Who knows?

And to close the post, Linus’s snowball before it turned into brown minty-fruity sludge. 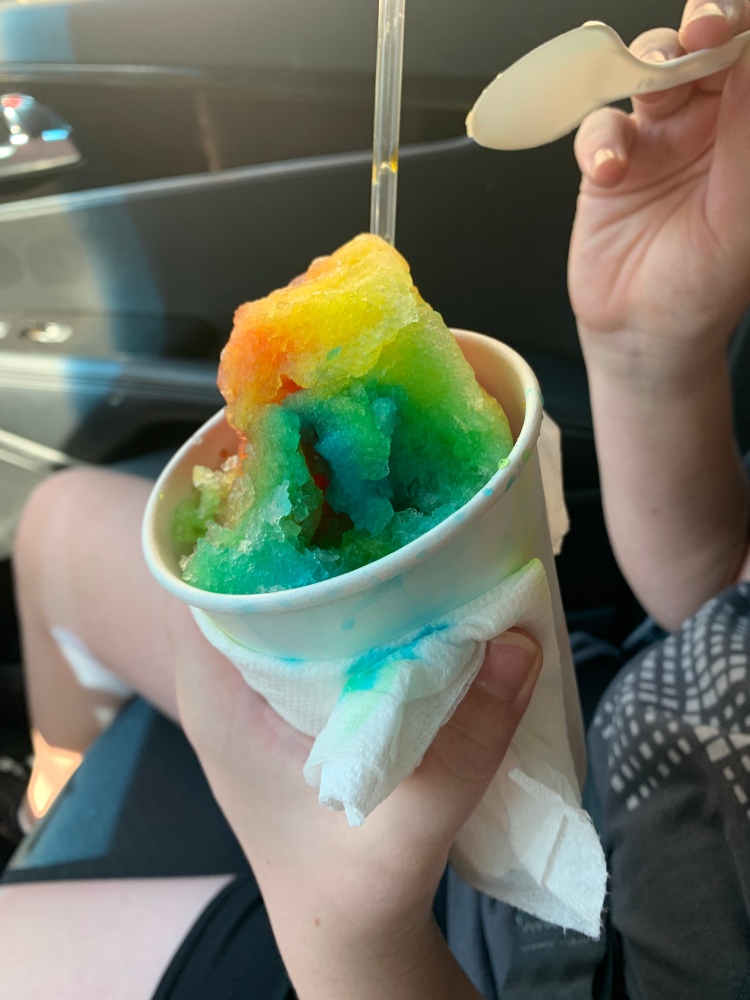