Last night, I was scanning some pictures, and this was one of them. It was a picture the NICU nurses took. I would love it when I went to visit the boys, there was always a picture of them that the (presumably bored) nurses would take of them in the middle of the night.

I love how their elbows are all like that. I found out later that it’s actually called the fencing reflex (or more boringly, the tonic neck reflex). Love that! 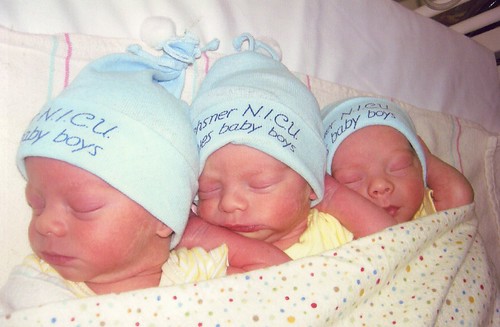 For the longest time, I would look at this picture and not really know who was who. (I do know they’re in birth order, so L-O-M, but I wouldn’t have known just by looking at them.) But now I can totally see Oliver is the baby in the middle. And Miles is on the right. And yes, Linus on the left. Like now they’re looking like their newborn selves. Weird.

Christmas skirt started! I’m in love with this @rubystarsociety copper metallic fabric I got at @chateausewnola on a whim. Pattern is the pleated version of the #uptonskirt by @cashmerette. And yes, it has pockets. #sewing #memadewardrobe #curvysewing #dreamy
Fourteen.
Presents are fun. 🎂🎁🎉🎂🎁🎉
Birthday eve! #almost14 #triplets #familypic 🍣🍱