It’s been way too long since I’ve posted a real post. The kind with words and stuff. I feel pretty bad about just posting a bunch of pics about Austin, when I have lots of great memories that I really should be writing down. Let’s just hope the pictures help me remember them later. Or maybe I’ll end up editing that post with more details. We’ll see.

I think the best way for me to organize my thoughts is with bullets, since this’ll be all over the place.

I’ve been thinking for a long time about doing some kind of bootcamp fitness program, but I’ve been unable to find one that was at the appropriate times, etc. I was talking to someone a few weeks ago and she mentioned she was going to Orange Theory Fitness so I looked into it and ended up going to a class yesterday.

It was tough, I gotta say. It’s funny, you think “I can run a few miles at a time, and I can do half marathons without dying, so I must be in some kind of shape” and then you do a class like this and

It’s high intensity interval training, and there are treadmills and rowing machines and weights and floor exercises and wow, when I got off the rowing machines after a few minutes my legs were like jelly.

So I signed up to go as much as humanly possible and try to get really fit over the next two months (and beyond) because in two months, this is happening…
Say hello to our next group of #WCEU speakers!

Yes, my coworker Erica and I are giving a talk at WordCamp Europe in front of, oh, I don’t know, more than the 20 people I spoke to at WordCamp Dayton. At least I can hide behind Erica, except she is tiny.

Anyway, my only point is that I want to feel good about myself before getting on a stage in front of more than 20 people.

In non-me related things, I continued to allow my children to really express themselves through their hair. I mean, it’s not hurting anyone. It’s temporary (ish, I mean, I did have to bleach their hair to get it this vibrant, but hair does grow) and if you could have seen how happy Linus was after we made his green, well, any doubts would have been wiped away. 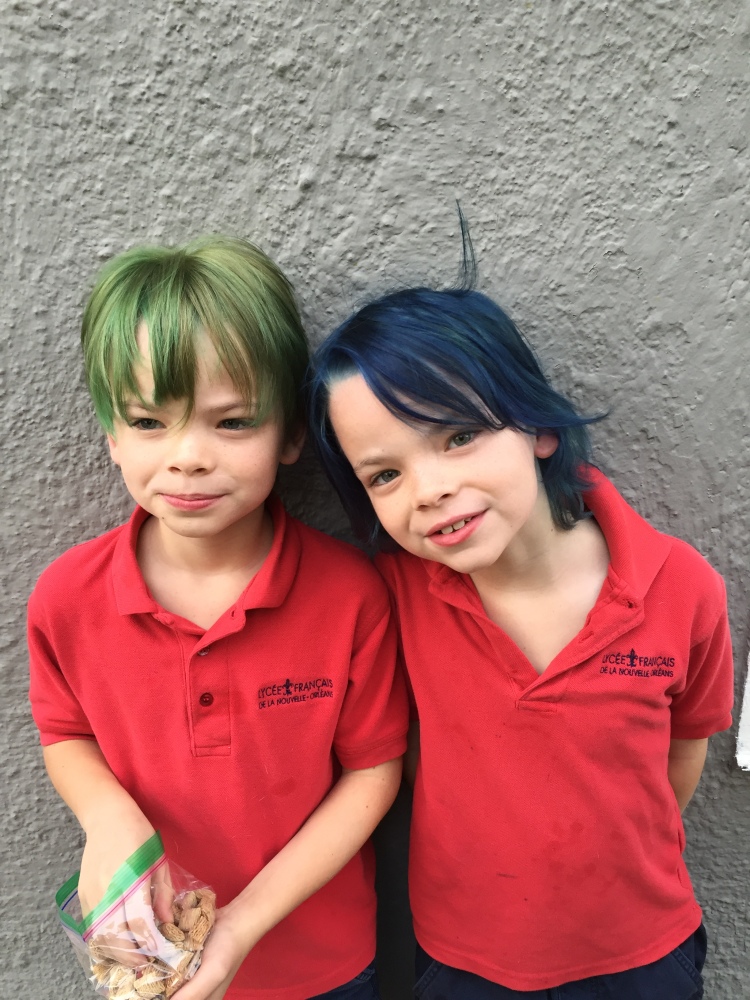 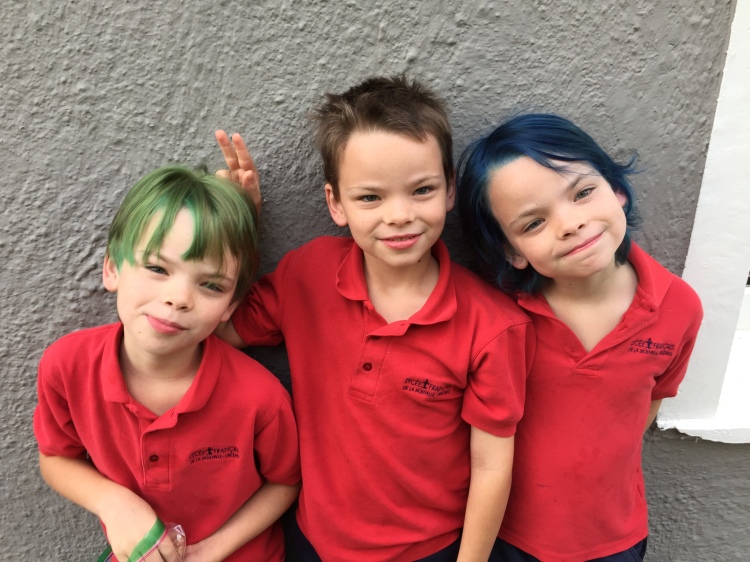 Miles wanted to be in the picture too. He of course also now wants to dye his hair, but I pointed out that his acting career might suffer if he does. So we’re leaving it as is for now. Anyway, if I have to end up dying Linus and Oliver’s back, I’ll need a reference for the original color. Ha!

I had a really fun weekend with the boys, not just dying their hair. We saw Jungle Book (really good) and watched a bunch of baking shows on Netflix. MilesCupcake Wars in particular inspired us to whip up a batch of homemade vanilla cupcakes and vanilla buttercream frosting. I even scraped seeds out of vanilla bean pods, that’s how serious we were. They were deeeelish, in spite of the fact that I apparently left a box of powdered sugar at the grocery store after paying for it, so our frosting was more butter than anything. Nothin’ wrong with that 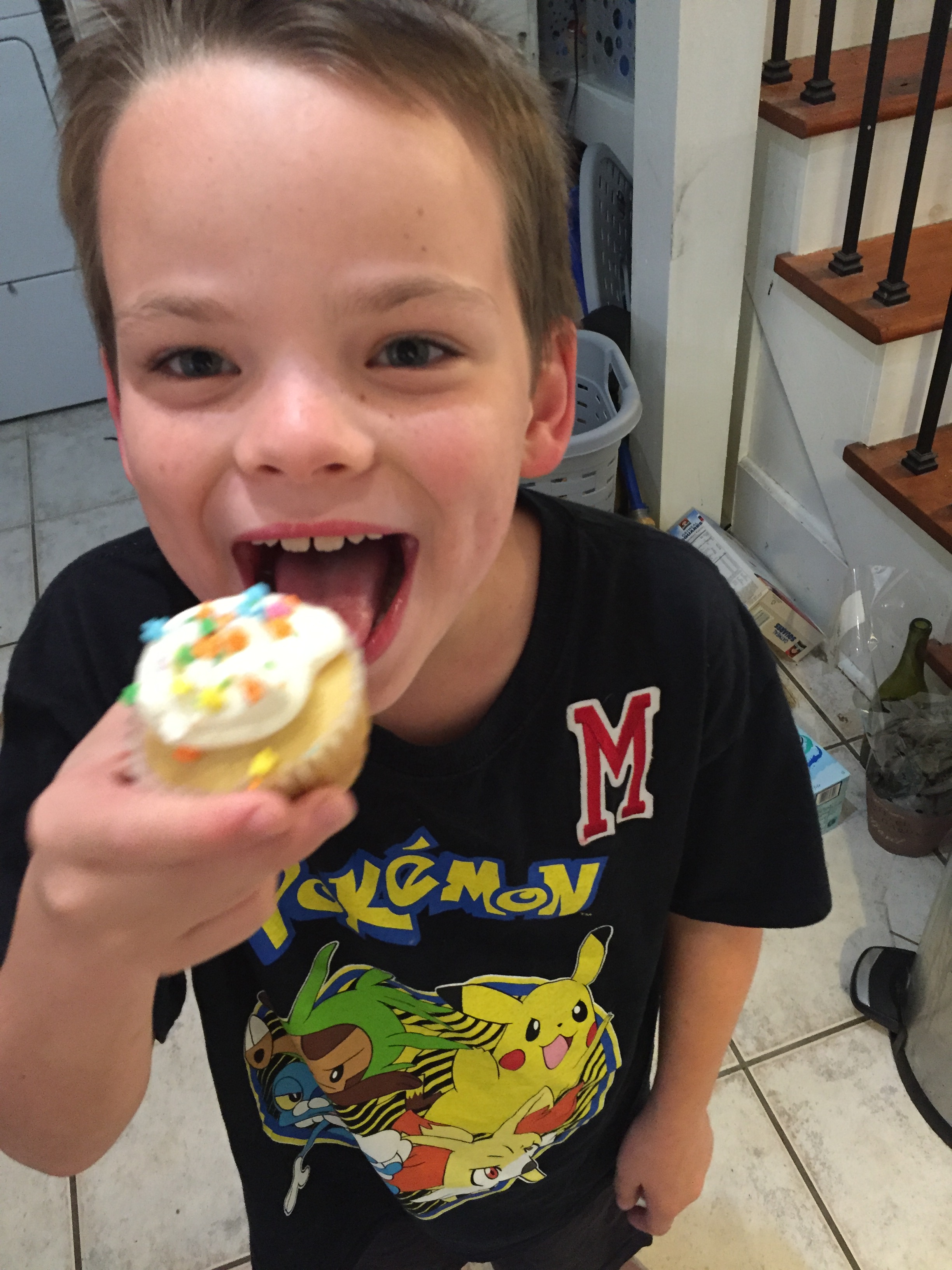 Miles approves of my frosting recipe.

I did it! I made the perfect coat. It's a simplified version of the #chiltontrenchcoat from #cashmerettepatterns using wool melton from @blackbirdfabrics and lining from @joann_stores. I decided against buttons and buttonholes and went with toggles instead. More on the blog!
More pics from a weekend with Uncle Evan and Eleanor. #family
The Bench #7, 2022. (1-6 on the blog.)
We went to Italy for dinner, I think. #pizza #yum
Join 2,621 other followers