So Friday. We slept in until about 8, and Kristina made the tiny pumpkin pies for the cupcakes. Our plan was to head into the city to go to the zoo, but we were in no rush.

After a torturous journey on the Metro, we made it to the zoo! And we were smart to borrow strollers from my friend Anne so the kids wouldn’t get too worn out. My friend Chris met us there (he lives and works in DC) and hung out for the afternoon.

We saw elephants and foxes and zebras, oh my! 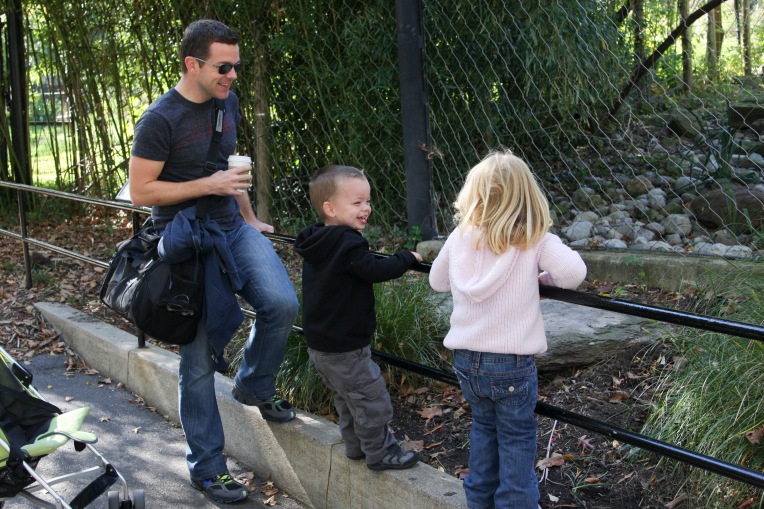 But Linus’s favorite was all the giant boulders. He liked to try to pick them up.

After the zoo, we headed over to the Mall (the one without the shops) to ride on the carousel. Yay! Linus was thrilled, especially after the previous weekend‘s heartbreak. After a whirl on that (I was riding, so no pics), we headed over to the Natural History Museum so they could see more rocks. (Too dark in there to get decent pics.)

Then we headed back to meet up with our friend Anne, and had dinner with her and her son, Whitman. We went to a Chinese restaurant where Emily and Linus declined to eat dinner, and they had minor melt downs. They were tired. Back at my sister’s, the adults stayed up way too late finishing the cupcakes and drinking wine. Ahh, good times. 🙂

On Saturday, I had plans to meet up with some other moms of multiples for brunch. Even though I was somewhat hungover, we all had a great time. There was good food and lots of cute kids.

After that, I was dying to go to Trader Joe’s, so we took a quick trip through, even though I didn’t get to really buy anything. So sad.

We headed over to Kiki’s house later that day, and due to my “wine headache” (ahem) I kind of forgot some important things (i.e., my suitcase) at my sister’s house. Fortunately, Kiki holds her wine better than I do, and she drove me back to my sister’s house, half an hour away, to get it. The rest of the evening involved attempting (and failing) to get Linus to fall asleep.

I’d noticed a rash on his neck that morning, but it didn’t seem to be bothering him much. But later on, I noticed it was on his arms and torso as well. He was extremely uncomfortable later, and he just couldn’t sleep. (Turns out it was poison ivy.) He finally fell asleep with me, but that meant I got very little quality sleep. Ah well, who needs it?

One thought on “Virginia recap: Friday”